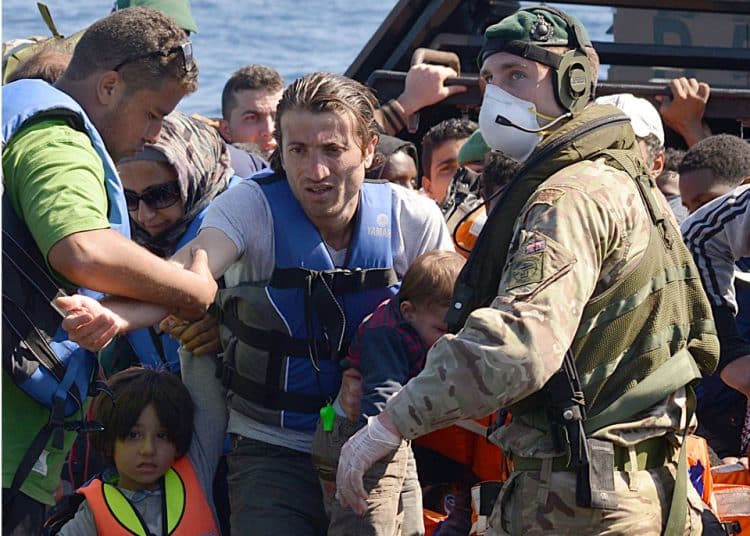 The sailors and Royal Marines of HMS Bulwark help migrants ashore. Picture: PO (Phot) Carl Osmond The Royal Navy has safely delivered nearly 800 rescued migrants ashore in Italy this morning [30 May]. The sailors and Royal Marines of HMS BULWARK helped 747 survivors ashore in the port of Taranto some 36 hours after being plucked from their dangerously overcrowded boats in the waters just north of Libya earlier in the week. Many of those rescued were small children, even some without parents. Most were clearly exhausted from their perilous journeys, often over many months. But all were clearly relieved to have finally found safety. The speed with which the Italian Red Cross, Police and Government Officials have received these survivors has been really impressive and as a result we should be able to set sail later this afternoon, said Commander Gavin Edward, coordinating the ships arrival on the jetty. But as the steady stream of dazed migrants crossed the gangway, shielding their eyes from the intense Mediterranean sunshine, a frenzy of activity kicked into action onboard. Behind the towering grey sides of the amphibious warship, the 450 members of the Ships Company are working round the clock to prepare the ship to return to her search and rescue mission as soon as possible.

Back in April 2021, we wrote about the home secretary’s plans to bring an end to ‘dangerous’ Channel crossings by migrants travelling from France to the UK. We made the point that doing so might risk breaching international law by refusing to allow the passage of individuals who have a right to claim asylum here. Since March, matters have become more intense following the arrival of many thousands of migrants on small boats from France in recent weeks.

According to the latest statistics, over 13,500 migrants have made the journey in 2021 so far, including 1,000 in just two days. In this article, we will take a look at the latest controversy regarding the proposed return of boats crossing the Channel with migrants who wish to claim asylum in the UK.

Priti Patel made it clear in the announcement of the nationality and borders bill that she wanted to see changes to stop the passage of asylum seekers, in large part to halt the activities of illegal people smugglers. She stated, “People who come from France, Germany, from safe countries around the world who then cross the Channel in small boats … they will not be able to claim asylum in the UK in the way that they have been able to for so long”.

On 9 September 2021, it was announced that Patel intended to send back any small boats carrying migrants arriving in UK waters. It was reported in the media that UK Border Force staff are currently being trained in how to employ “turn around” tactics at sea.

In response, the French government has rejected the idea, rightly claiming that such actions would endanger the lives of vulnerable people. According to the French interior minister, Gérald Darmanin, they would not accept turn arounds on the basis that “safeguarding human lives at sea takes priority over considerations of nationality, status and migratory policy”. He also said that employing such an approach “would risk having a negative impact on our cooperation”.

Not only would turn around tactics put the lives of men, women, and children trying to reach the UK in danger, it may also be a blatant breach of international law.

Forcing small vessels laden with vulnerable migrants back into the Channel may be a violation of international maritime law. Border Force officials operating in British waters are obliged to adhere to the UK and international law defined by the United Nations. The 1982 United Nations Convention of the Law of the Sea states that vessels have a clear duty to assist those in distress. According to Article 98 (1):

“Every State shall require the master of a ship flying its flag, in so far as he can do so without serious damage to the ship, the crew, or the passengers … render assistance to any person found at sea in danger of being lost [and] to proceed with all possible speed to the rescue of persons in distress, if informed of the need of assistance, in so far as such action may reasonably be expected of him.”

The challenge for the Home Office is that to push back a boat, it must be able to guarantee the safety of the passengers. Clearly, this is not possible if they are simply forcing a small boat, many of which are in poor condition or outright dangerous, into the middle of the English Channel. 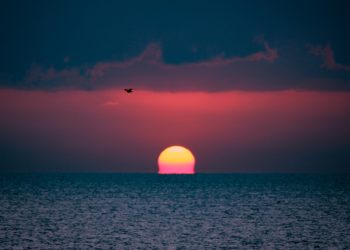 The move by the Home Office also risks breaching the 1951 Refugee Convention. Article 1 of the 1951 Convention confirms that a ‘refugee’ is a person who “owing to a well-founded fear of being persecuted for reasons of race, religion, nationality, membership of a particular social group, or political opinion, is outside the country of his nationality, and is unable to or, owing to such fear, is unwilling to avail himself of the protection of that country”.

As such, the mode of transport to a country to claim asylum is not relevant. Whether a person arrives in a small boat, a large yacht, an aeroplane, or a vehicle, they have a right to claim asylum and for that claim to be fairly considered. In addition, contrary to the misunderstanding of many, there is no need to claim asylum in the first safe country. Indeed, most migrants choose to make an effort to come to the UK and bypass other safe countries because they want to be reunited with loved ones already living here.

On 10 September, the UK government denied that they would breach international law. According to the UK’s culture secretary Oliver Dowden, Patel is “rightly exploring every possible avenue”. He clarified, “We have said that that will include looking at turning migrants back, but that will only be done in accordance with international law, and clearly the safety of migrants is absolutely paramount.”

Unfortunately, Dowden also made the possibly misleading statement that “Firstly, in relation to these migrants, it is worth remembering they are coming from a safe country, which is France … This has been a persistent problem for a long period of time. The home secretary is rightly exploring every possible avenue to stop that”.

As we have said in the past, the government cannot say they wish to adhere to international law and breach it at the same time. This is not a tenable position. What is needed is a more compassionate approach that breaks with the tired ‘hostile environment’ narrative, in conjunction with improved cooperation with our continental friends.

Being seen to be open to the arrival of evacuees from Afghanistan while turning our backs on asylum seekers crossing the Channel sends a message that we are only willing to protect some who need help but not others.

Tracey is a content writer for Reiss Edwards, one of UK’s leading Immigration solicitors law firm that offers immigration services to individuals and businesses across the UK and globally.