Paul Bright writes about Peter Norman at the 1968 Olympics, where he made a show of solidarity to racial equality by standing with Carlos and Smith as they made the black power salute; today, many athletes take a knee, or sit for the national anthem. 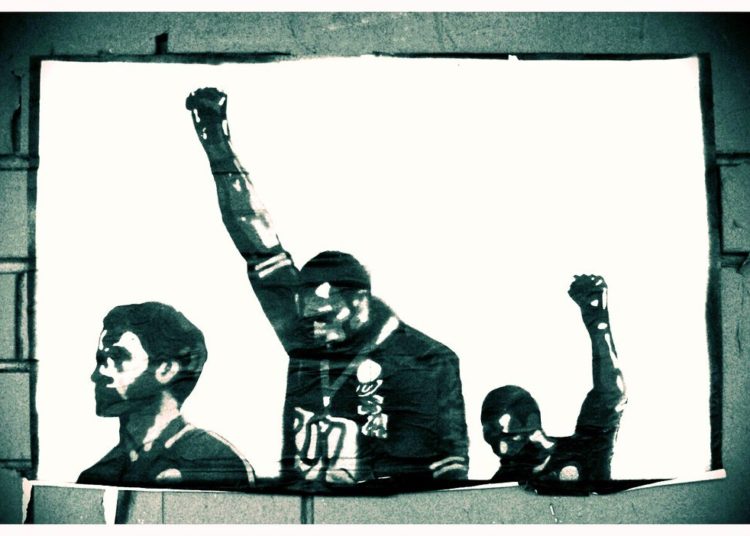 The murder of George Floyd sparked not only a wave of Black Lives Matter protests, but also a resurgence of the connection between sport and civil liberties. The interaction between the two are historic, with the tumultuous 1960s witnessing the start of this.

The 1968 Olympics at Mexico City produced one of the most famous sporting photographs in history, where two African-American athletes, Tommie Smith and John Carlos, made the Black Power symbol (a raised black-gloved fist) on the podium during the US national anthem. Beside them, Peter Norman, a white Australian sprinter.

When Mexico City was selected as the venue for the 1968 Olympic Games one coach famously predicted, in reaction to its altitude of 2,240 metres (7350ft), “there will be those that will die!” Fortunately, that didn’t happen, but slightly reduced gravity and a rarefied atmosphere may have affected some remarkable performances.

Athletes at the 1968 Olympics

On 18 October, Bob Beamon with his first attempt in the long jump competition set a new world record for of 8.90 m (29 foot), bettering the existing record by 55 cm (21.6 inches). When the announcer called out the distance for the jump, Beamon who was not familiar with metric measurements – still did not realise what he had done.

His teammate and coach Ralph Boston another excellent long jumper informed him that he had broken the world record by nearly two feet! The defending Olympic champion Lynn Davies (my school sport master at the time) told Beamon, “You have destroyed this event”.

Peter Norman also took a liking to these new conditions; he was to finish second in the 200m final, securing a personal best (believing he had added 4 inches to his stride), and achieving the Australian 200m record, which still stands today.

What followed the race was even more remarkable.

Black power at the 1968 Olympics

Peter Norman is the third athlete pictured in the famous 1968 Olympics ‘Black Power’ salute photograph, which was taken during the medal ceremony for the 200-metre event.

Norman was aware of the planned photograph, as he had been informed by Smith and Carlos; it’s reported that Carlos had left his gloves at the Olympic Village, and so Norman suggested that they share one pair (hence why Smith raises his right first, and Carlos his left).

Norman told Carlos and Smith, “I’ll stand with you”, and Carlos, who initially expected to see fear in Norman’s eyes, instead “saw love”.

The three of them wore the badge of the Olympic Project for Human Rights (OPHR), with Norman’s borrowed from US oarsman, Paul Hoffman.

Repercussions for the athletes

Smith and Carlos were immediately removed from the US team, banned from the Olympic Village, and received death threats on return to America. Norman also suffered as a result; he wasn’t selected for the 1972 Olympics, and the Australian media called for his punishment.

After the event, Norman was reported to have said, “It was like a pebble into the middle of a pond, and the ripples are still traveling.”

In late 2006, Norman had a heart attack and died, aged 64. The date of his funeral, 3 October, is now known as “Peter Norman Day”. At his funeral, Smith and Carlos read eulogies to Norman, a touching show of their gratitude for his actions.

In August 2012, the Australian House of Representatives debated a motion to provide a posthumous apology to Norman. The chamber passed an official apology motion on 11 October 2012.

The motion acknowledged the bravery of Norman’s decision to wear the OPHR badge as a display of solidarity to African Americans. They also issued an apology for the treatment the athlete received when he returned to his home in Australia, and they belatedly recognised the enormity and powerfulness of Norman’s deed in furthering racial equality.

In 2018, the Australian Olympic committee awarded Norman posthumously the Order of Merit for his involvement of the 1968 protest.

The United States invited him to participate and take part in the 2000 Sydney Olympics when they believed that his own country had failed to do so.

Just as Norman, Smith, and Carlos were criticised for their decision to stand against racism, so too has Colin Kaepernick.

Kaepernick, an American football player and civil rights activist, is best known for his decision in 2016 to refuse to stand when the US national anthem was being played. His reason being that America “oppresses black people and people of colour.” Months after, other players followed the NFL player’s actions and kneeled during the anthem.

Sport can have a huge impact on civil liberties and social rights, and what Norman, Carlos and Smith did was far greater than any athletic feat or achievement.