Putin, a long-term user of anabolic steroids, is said to be suffering “aggression and personality change” as a result of a body-building obsession 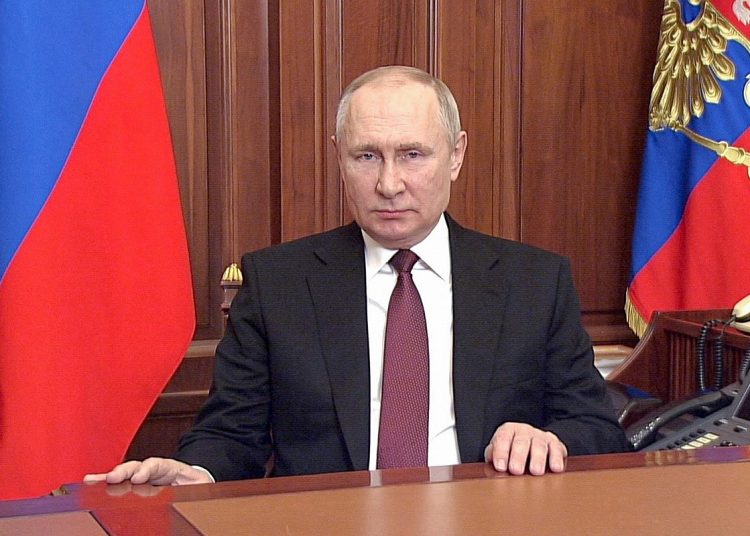 Vladimir Putin, by Presidential Executive Office of Russia, is licensed under the Creative Commons Attribution 4.0 License

If so, it could explain Putin’s puffy faced appearance and increasingly reckless policy making. Steroids also weaken the immune system and create a sense of paranoia, explaining perhaps Putin’s belief that Russia is under threat as well as his use of implausibly long tables and extended social distancing when meeting his own ministers and foreign visitors. Anabolic steroids also raise the risk of strokes and heart attacks.

His recent hate-filled public ramblings now appear in stark contrast to the cold, controlling figure who first rose to power in 1999 and could remain as president under current rules until 2036.

If this is true, it would fit all the known facts about Putin, literally now a despot on steroids.

The horrific war he launched a week ago in central and east Ukraine has quickly become an existential one for the disturbed Russian president. If he backs down or loses, the lid may be lifted on the state-controlled lie machine that he has created; the strange reverse Truman Show in which most Russians exist. The persistent illusion that many Russians live under would be destroyed.

In particular, the belief that Russia is anything like a functioning democracy or even a genuine economic or military super power (this is not to suggest it is not a nuclear super power). More on this below.

If this was to happen, the spell that has kept Putin in power for more than 20 years would be broken.

Russia has existed on a diet of lies for so long that its citizens no longer seem to recognise the truth even when it comes from within their own families.

Posts on Twitter talk of relatives in Russia unwilling to believe eye-witness accounts of Russian bombardment of Ukrainian cities from cousins cowering in bomb shelters. They prefer the entirely false, anodyne reports of Russian state-controlled media talking calmly of a ‘special peace keeping operation’ affecting only the Donbass. The idea of a widespread slaughter of innocent civilians is rejected as unbelievable.

Under seven decades of communism, the rising prosperity of the West was hidden behind a police state, faked tractor production figures, poor quality consumer goods and state-subsidised prices of basic commodities. Travel was restricted to a trusted few. Leaders enjoyed privileged lives in their dachas. The dreary struggles of Soviet life was accepted as the price of stability.

The collapse of the Soviet Union in 1991 gave the population a brief glimpse of all the vibrant, chaotic and noisy expression of democracy. They decided the experience was not one they liked very much. Putin came to power promising stability, but the new false reality he has conjured up is badly damaged. An increasing number of ordinary Russians have, thanks to the mobile phone, seen behind the curtain of misinformation and are protesting against the war.

In a clear sign of growing Kremlin anxiety, it is becoming increasingly repressive. Facing international opprobrium, the isolated and embattled regime is closing down human rights groups and has threatened to block access to foreign news websites which carry accurate reports of the Ukraine catastrophe.

A new law could give 15-year prison sentences for anyone guilty in Russia of spreading “fake news” – known everywhere else outside Russia as the truth – about the Kremlin’s unprovoked attack on a peaceful sovereign nation of fellow Slavs.

Its army has been exposed as callous but chaotic, poorly trained, ill-disciplined and ill-informed with incompetent planners and ageing, badly maintained equipment, probably a result of endemic corruption.

Twitter is full of posts showing destroyed, abandoned or captured Russian hardware with reports now coming in that the 40-mile armoured column heading for Kyiv from the north has been stalled for days, partly due to a lack of fuel and food, but also by congestion and broken down equipment.

Others suggest the tyres of some military vehicles have rotted, through age and lack of use. As spring approaches, manoeuvring on soft muddy ground is causing even heavy tracked vehicles to become bogged down.

Russian armed forces’ performance and significant losses against a modest but determined opponent will have given NATO planners some confidence.

The sanctions applied by the West have brought the Russian financial system to its knees and heading for total collapse. The ruble has plummeted in value. This morning at 8.38am it was trading at 154 to the £1. Last October it was 95 – this is a massive drop that will affect the savings of millions of Russians.

Rising inflation has triggered a doubling of interest rates to 20 percent. Many mortgage holders will be forced to default.

Russia’s largest lender Sberbank has lost 97 percent of its value on the London Stock Exchange in the past fortnight. Share trading in Russia has been suspended this week for fear of a stock market meltdown.

The owners of Nordstream2 – the second gas pipeline from Russia to Germany – have filed for bankruptcy in Switzerland. The multi-billion pound project may never be brought into use, cutting Russia’s future foreign earnings.

It seems clear that sooner or later Putin will simply run out of money. Sanctions may prove to be the West’s secret weapon. If and when he is forced out, it will leave Russia in the 21st century still be waiting for its first leader to be removed from office by a democratic vote.

This morning, the International Criminal Court is continuing to investigate possible war crimes committed by Russian troops and commanders after a record 38 countries made referrals.

If the West remains united and can sustain the sanctions until Putin steps down, is removed or reverses course, it would be advisable for all sanctions to remain in place until Russia agrees reparations and to hand over any identified alleged war criminals – which may include Putin himself – and agrees to major reforms to its constitution including the ending of cyber attacks and interference in foreign elections.

If the price for ridding the world of a tyrant is to be paid with the blood of thousands of brave Ukrainians, it seems the very least Europe can do is fast-track EU membership for Ukraine. And NATO should quickly move to allow in as full members Georgia, Moldova and any other countries including Sweden, Finland and Switzerland and Austria who wish to join the alliance.

Russia has shown itself to be a perfidious partner. If we cannot strengthen Europe at the moment of Russia’s greatest weakness, we will never get a better opportunity.

For anyone struggling with steroid addition and abuse, there are many organisations out there that can help. Search for a local group on the Change Grow Live site.