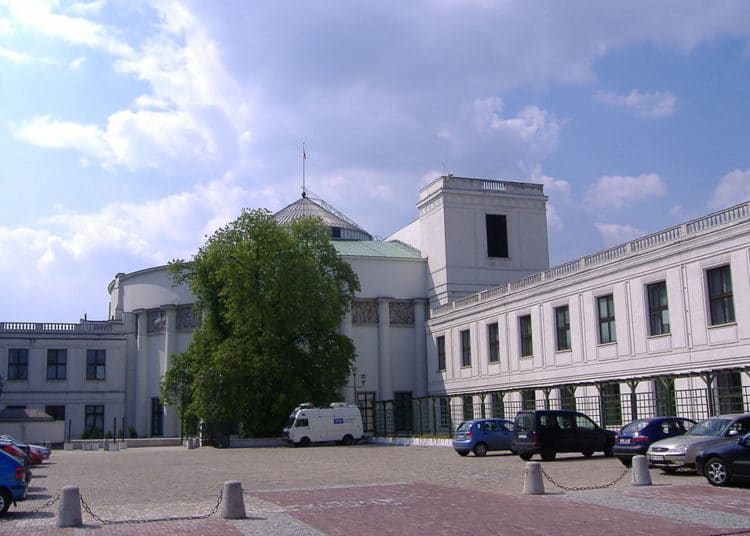 In the October 2015 elections for the Polish parliament, the Law and Justice Party (PiS) won an outright majority with an ambitious Poland First programme of so-called “good renewal”, which included a generous social welfare programme and a desire to overturn their predecessors’ social and economic policies.

PiS is ultra-nationalist and socially conservative, opposing (indeed reversing) LGBT rights and women’s rights (for example, they have said they will take Poland out of the Istanbul Convention on preventing and combating violence against women and domestic violence). They also opposed taking a share of Syrian refugees because they didn’t want to undermine Poland’s Catholic identity. Their leaders are obsessed with exposing the supposed criminality of the post-communist political and economic establishment and its failure to challenge the EU’s liberal social agenda.

In particular, they blamed a self-perpetuating independent judiciary that they claimed to include judges from former communist Poland. In fact, there were barely three former communist lawyers left in the Supreme Court out of a total of 125 members, as the remainder had long been retired. PiS’s self-declared mission to brook no opposition to their economic and social programme led it to uproot democratic conventions and cut legal corners with a series of measures that subjugated the judiciary and the state media to their party political “control”.

Since 2016, a number of EU and even UN institutions have criticised the changes to the political framework by the PiS government, but with only a limited effect. On 20 July 2020, the committee on civil liberties, justice and human affairs (a committee of the European Parliament) issued its latest interim report, urging the EU Commission to take punitive measures against Poland because of “a clear risk of a serious breach by the Republic of Poland of the rule of law”.

The report recounts in great detail the measures taken by the PiS government to erode fundamental human rights and subvert the independence of the judiciary in Poland. This has taken place not in one fell swoop, but as a result of a thousand cuts, each moving forward the agenda despite attempts to prevent each transgressions by either an outvoted and demoralised internal opposition, or by the various EU relevant institutions.

In a 20-page document, the committee lists the abuse of powers by the new parliament from December 2015 onward when it assumed powers to revise the constitution and curtail the independence of the civil service, the police, the Public Prosecutors’ Office, the ombudsman for human rights, the National Media Council and the judiciary. In particular, the committee criticised the merging of the hitherto non-political office of prosecutor general with the political post of justice minister. The new parliament also redesigned the judiciary by politicising the appointments to the Constitutional Court and by introducing new institutions. These new institutions included the Chamber of Extraordinary Control, the National Council of the Judiciary, and the Disciplinary Chamber, all staffed with the justice minister’s nominees in order to control and even purge judges both in the independent supreme court and in local courts.

This has led to a dangerous duality in the Polish justice system where, for example, the current Supreme Court passed a resolution refusing to recognise the validity of pronouncements by the government-controlled Disciplinary Chamber, while the government-controlled constitutional tribunal declared the Supreme Court’s resolution as unconstitutional. The committee acknowledged that the organisation of the justice system is a sovereign national competence, but EU members are still required to ensure their legislation does not breach EU law, and in particular the separation of powers between the legislature, the executive and the judiciary.

Other aspects were criticised too, such as the work of the National Media Council changing the state television into a crude propaganda outlet for the ruling party and for its candidates in the ensuing elections. The committee also highlighted concerns over new legislation that has curbed:

The committee found that legislative changes brought in by the ruling party have also encouraged hate speech, public discrimination, violence against women, domestic violence and intolerant behaviour against minorities. It concluded that these measures in Poland “amount to a serious, sustained and systemic breach of the rule of law”. These, and other crucial pieces of legislation, were passed with excessive haste and little chance of adequate public consultation or parliamentary scrutiny, mainly late at night, in an atmosphere fraught with tension and anger where bullied opposition MPs had their mikes switched off after one minute of debate.

The committee has called on the EU Commission to use all tools at its disposal including budgetary controls and voting rights under Article 7 the Lisbon Treaty, to ensure “all EU countries respect the common values of the EU”.

In view of the narrow victory of its candidate in the presidential election on 12 July, the ruling PiS shows no inclination to comply with the resolution of the committee. The EU Commission is also currently not in a position to lay down the law, because it needed a unanimous vote at the European Council summit that concluded on 21 July, to pass through an ambitious package of 750bn euros to combat the Europe-wide economic crisis following the Covid-19 lockdowns on the continent. The Polish government would only give its consent to this package of measures, through which it would receive a generous provision, if it was agreed that there would be no curtailment on Poland’s access to these funds because of its breach of European law.

The wording of the final agreement was something of a fudge. The distribution of funds would be subjected to majority voting and not unanimity, but the Polish prime minister was assured that the EU Commission would design the new budgetary safeguards so that the funds would not be threatened by any disciplinary measures against Poland. The European Parliament has already passed a resolution expressing concern at this ambiguity. At the same time, the Polish justice minister has bitterly criticised the prime minister for not clearing up the ambiguity at the summit, as it appeared to threaten the continuation of his party’s authoritarian “good renewal”.

The EU Commission is to publish the budgetary mechanism for issuing the funds at the end of September and then we shall see, in the resulting confrontation between the EU Commission and the Polish government, which side will blink first.