Home Secretary Priti Patel, this week confirmed that almost all arrivals to the UK will be expected to isolate for 14 days. Three months into the lockdown, introducing a quarantine period now is too late. 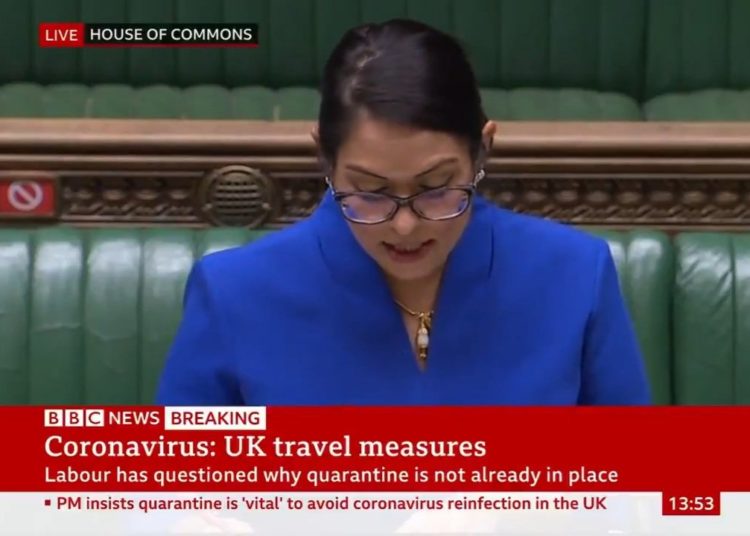 Home Secretary Priti Patel, this week confirmed that almost all arrivals to the UK will be expected to isolate for 14 days. Three months into the lockdown, introducing a quarantine period now is too late.

Back in March when the prospect of a UK lockdown still seemed the stuff of fiction, I was working in Uganda. I watched the unfolding news from Europe on my safe hotel balcony in the capital, Kampala. We spent the warm evenings discussing ways to stay longer in Africa, to return soon for holidays, and set up further ventures.

Two days after I returned to the UK, Uganda closed its borders to foreign nationals. Uganda – a land-locked country in East Africa – had no cases of coronavirus. It meant to keep it that way. In Victorian times, Uganda became famous to Europeans for the discovery of the source of the Nile. It shares borders with South Sudan, Rwanda, Kenya, Tanzania, and Burundi. A part of the world normally considered dangerous. It had become a safe haven.

Africa is a continent with a history of epidemics. With this history comes the experience and knowledge of handling a crisis. Ebola, Cholera, HIV and malaria have devastated the region. As we filed off the plane in Nairobi and Entebbe airports, I was impressed with the TV monitors displaying our body temperature. Hand sanitising is routine in all public places. Filling in the notifiable diseases questionnaire, I was aware I was coming from a disease ‘hotspot’: the UK.

It’s hard to comprehend just how big the continent of Africa is. The US and Europe could fit inside its borders with countries to spare. Africa is home to some of the world’s poorest people. Colonialism mercilessly exploited its resources and people. The result: instability and a fragile infrastructure limited in its ability to cope with disease. Every single day the continent battles epidemics.

Ebola killed 11,000 people in West Africa. Each year in Africa an estimated 120,000 people die from cholera, and one million from HIV/AIDS. Globally, malaria kills between 1–3m people each year, some 80–90 per cent from rural sub-Saharan Africa. These statics rarely make headlines, but they have made African countries more resilient to the current pandemic.

Globally and in UK, cases of Covid-19, continue to increase daily. Tragically, in Yorkshire and the north-east over 12,000 people have died of the disease. The north is the region with the highest death rate in England. As I write, Uganda has no deaths from the disease and only a handful of cases. Early travel quarantine is the main reason for this good news story. A quarantine period works, when it is introduced at the right time.

On my return to the UK, the airport was busy. There were no temperature checks, social distancing, or hand sanitisers in sight. Travellers were coming and going freely. By March, the UK was a global disease hotspot, where little prevention was apparent. It was a strikingly different picture to the African response. European countries rarely look to Africa for lessons in disease prevention. Had we done so during the current pandemic, we would have introduced travel quarantine sooner.

Uganda, a landlocked country, managed quarantine to prevent the spread of Covid-19. The UK is a country of islands, with fewer border challenges. We could have prevented many deaths by introducing quarantine in the early spring.

The new 14-day isolation period is allegedly to stop further disease arriving into the UK. What upside-down thinking. The UK has one of the highest rates of global infection. Travellers from UK, especially from the north of England, are far more likely to export Covid-19. Introducing travel quarantine now is like shutting the stable door after the horse has bolted. The measures will do little to slow the spread of the disease within our islands.