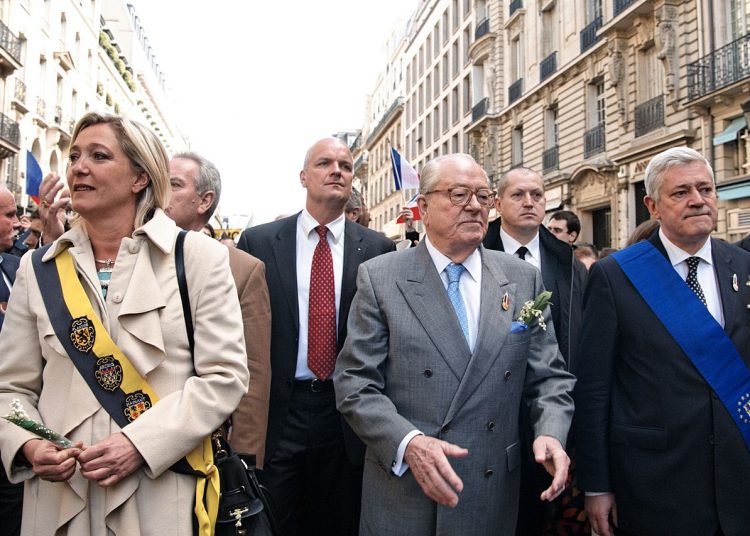 Marine Le Pen, Jean-Marie Le Pen and Bruno Gollnisch, 1st of May National Front's rally in honour of Joan of Arc, Paris - Photo by Marie-Lan Nguyen on Wikimedia Commons licensed by CC BY 3.0

As the nationality and borders bill is currently ping-ponging its way through parliament, it’s interesting to consider how the immigration policies of French presidential hopeful Marine Le Pen, of the extreme right Rassemblement National (formerly Front National), compare to those of the British home secretary, Priti Patel.

This Sunday is the first round of the French presidential elections. Marine Le Pen looks set to make it through to the second round and, for the first time, it appears French political commentators are decidedly nervous at this prospect.

Le Pen also survived the first round in 2017 but was roundly defeated by pro-European centrist Emmanuel Macron. Since then, she has been carefully rebranding the party, changing its name and softening its image. She dropped her Frexit rhetoric, accepting the lack of appetite among the French population for leaving either the EU or the euro. She purged the party of some of its most toxic elements and has been trying to woo the population of a younger voting age into her fold.

This year, with several nods to the demands of the anti-government gilets jaunes, she pledges not to increase the number of working years before pension entitlements are awarded, to build 100,000 new social housing properties a year – with tenancy priority given to French citizens. Her manifesto pledges to introduce a minimum pension of 1,000 euros per month (incidentally, a policy also in Macron’s), and to eliminate income tax for the under-30s. And because many gilets jaunes align with the anti-vax movement, she proposes an end to compulsory vaccinations.

So, whilst going on walkabouts and posting selfies with cats she is cosying up to a considerable portion of the population who feel left behind and politically homeless but who, up to now, may well have voted for one of several parties on the left of French politics such as Le Parti Socialiste, France Insoumise or Le parti Communiste.

Just as in the UK, the old certainties of left vs right have melted away in favour of social media inflamed appeals to identity politics.

With her ‘levelling up’ agenda and her newer, substantially detoxified image, Le Pen is hoping to attract a broader range of voters suffering from the harshest challenges of 21st-century living – who either don’t remember, or don’t care, about the consequences of the far right attaining power in Europe.

Le Pen is, perhaps understandably, remaining very taciturn about her party’s financial relationship with Putin’s Kremlin, her policy to leave Nato, and to veto an embargo on importing Russian gas.

And so, beneath the fluffy PR of her electoral campaign, the same old authoritarian agenda stirs. Her deep rooted Euroscepticism means that, although a Frexit referendum is no longer in her manifesto, she would still like to see an end to the EU in its current form at some point and will be a troublesome partner for other, more pro-European heads of state.

She is anti-devolution for French territories, wants to build more prisons and to extend the presidential term of office from five to seven years. She remains hardline to the extreme regarding crime and punishment measures – proposing short terms in adult prisons for minors. She also favours restrictive medical rights for women – limiting access to abortions – and making it practically impossible to prosecute police for inappropriate violence. There are also proposals to privatise state-run television and radio channels.

Predictably, Le Pen also has a raft of radical measures proposed for immigration. Her manifesto commitments concerning immigration include, but are not limited to:

Ordinarily, under these rules, Ukrainians currently suffering untold torments, would be forbidden entry, although Le Pen has added a caveat to exclude them from these draconian measures. Inconsistent – certainly. Populist – definitely. 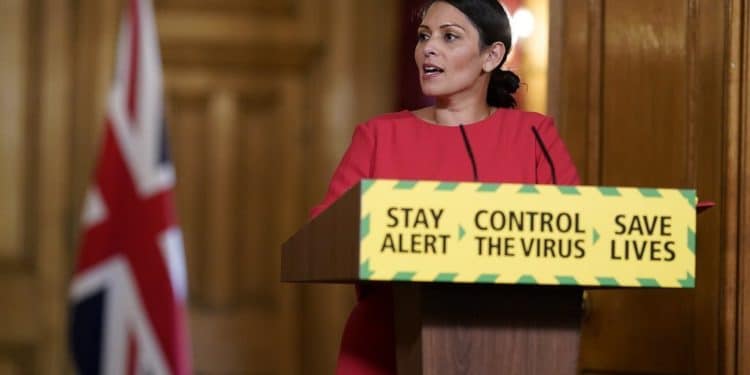 A mirror image in Brexit Britain

It is, perhaps, alarming to observe how far to the right the Overton window has drifted in the UK since 2016 – practically all of Le Pen’s manifesto pledges are mirrored in Patel’s nationality and borders bill, currently bouncing back and forth between our Houses of Parliament.

However, even Le Pen wouldn’t dare to insist that Ukrainians somehow obtain visas whilst fleeing genocide in their home country. Even she wouldn’t make them spend hours completing lengthy forms needing to be translated into English and mandatorily backed up by utility bills as they were fleeing burning homes with nowhere safe to go and just a mobile phone to hand.

Furthermore, despite her best efforts, Le Pen couldn’t make it as expensive as the current British government has done to obtain citizenship even through legal means. When the Conservatives took office, the cost of an application for British citizenship was between £460 and £690, depending on whether the applicants were individuals or families with children. According to BritishCitizenship.org cost, by 2019 this had risen to between £1,330 and £4,725.99 per person and £1,040 for each child. If your application is unsuccessful there is no refund.

In stark contrast, French citizenship is currently €55 for adults and free for children (€110 for a family of four), easily affordable for a single mother such as myself, and my children, after Brexit made it necessary for us to apply.

Le Pen can currently only dream of getting away with what this government has already set in place.

Until very recently Le Pen was suffering in the polls. The new far right political upstart Eric Zemmour had split the vote on the extreme right and Macron has been generally praised for his management of the numerous crises that have beset his time in office. He has had to deal with the gilets jaunes, Covid and the energy crisis – especially the rising fuel costs – and is seen by the populace as having been relatively successful in confronting these.

But France assumed the presidency of the Council of the European Union in January of this year, just as tensions between Russia and Ukraine were escalating to a crisis point and culminating in the most devastating and geopolitically perilous war on the continent since 1939. This initially played well for Macron but it has meant that he has been totally absent from the campaign. As a result of the war, petrol prices have rocketed and this has given Le Pen an opportunity to present herself as the voice of the everyday person on the street.

The left is split into factions, each regarding the other as either too radical or too bourgeois. The traditional right is in tatters after a disastrous series of financial scandals that resulted in former president Nicolas Sarkozy being sentenced to a year of house arrest for financial irregularities during his 2012 re-election campaign.

Le Pen hopes to fill the void for some and counts on high levels of abstention from others. If she makes it to the second round on Sunday, the landscape of this election has the potential to echo the twin shocks of Donald Trump’s election victory in the USA and Vote Leave’s tumultuous EU referendum victory in the UK.

Whatever political shocks may be on the horizon, one thing seems very clear. Madame Le Pen would find herself very much at home in the current Conservative Party.