Perhaps it is not surprising that Putin is now trying to rewrite the history of the Second World War, and that a Tver prosecutor claims there is no documented evidence of the massacres. 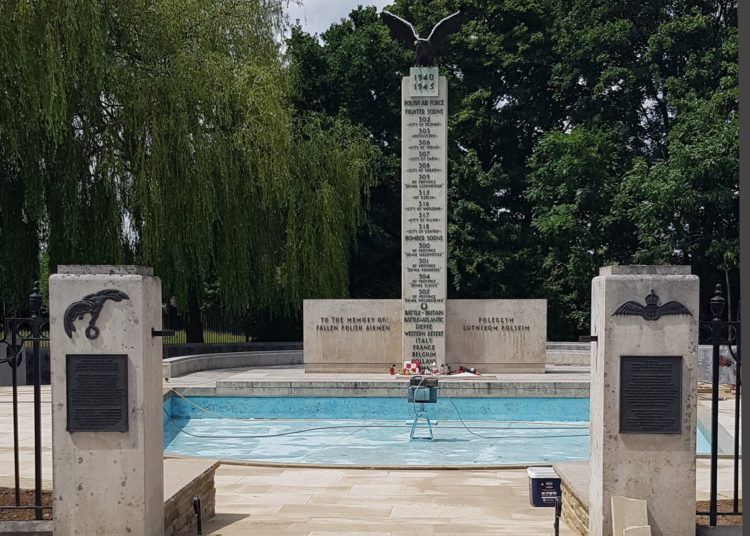 On 7 May, a plaque to the victims of the Katyn massacres was removed from the wall of the former NKVD building (People’s Commissariat for Internal Affairs) in Tver, a city 110 miles northeast of Moscow. Victims’ families protested and the Polish community in the UK wrote to the Russian ambassador in London, but there was silence from Poland’s wartime allies – who are also Poland’s leading allies in NATO today – Britain and America.

Older Brits remember gratefully the Polish armed forces that fought for Britain during the Second World War – the Polish navy that helped sink the Bismarck; the army that fought at Tobruk, Monte Cassino and the Battle of the Bulge; and the air force that helped win the Battle of Britain. They had escaped the invasion of Poland and their descendants are still living in the UK today.

Most Polish forces were not so lucky. In 1939, after fighting bravely, they were eventually taken as prisoners-of-war (POWs) by Germans invading from the west, or by their allies the Russians, who invaded from the east. The Russians met the Germans in the middle, where Hitler and Stalin agreed to divide Poland in two.

When my cousin Teresa was born, her father, my uncle Marceli, was already a Russian POW. He never saw his youngest daughter, because after selection by the NKVD (the predecessor of the KGB), he, fourteen generals, an admiral and thousands of other officers in the prison at Tver (then known as Kalinin), the Katyn camp and elsewhere, were shot in the back of the head one by one on Stalin’s orders – 6,287 at Tver.

The officers were mostly Catholic, but about 8 per cent were Jewish and included Baruch Steinberg, chief rabbi of the Polish army. The Russians had also been arresting the Polish elite, so the victims included border guards, police, landowners and even Wiktor Chajes, the Jewish deputy mayor of the leading Polish city Lwów. Stalin then began deporting the general Polish population to Siberia – ethnic cleansing to make space for an imported population.

In June 1941, Hitler suddenly attacked his ally Stalin, interrupting the deportations. The Russians released the Polish POWs and deportees to form a new Polish army to fight the Germans. But it soon became obvious to the Poles that there were hardly any officers, and that the Russians must have done something to them.

German troops carried on into Russia and discovered the first mass grave in a forest near Katyn. Goebbels arranged for the ‘discovery’ of 3,000 bodies of officers, piled up in 12 layers, to be broadcast to the world on 13 April 1943, so that in the middle of this horrific news less attention would be paid to the final German attack on the Warsaw Ghetto a few days later, on 19 April. This propaganda tactic worked. The Polish government protested vigorously and called for an International Red Cross investigation. Stalin then broke off diplomatic relations.

The Germans took some of their own Polish POWs to see trees growing above the mass grave. They also showed them personal diaries, all ending at the same time, proving that the massacre was perpetrated during the earlier Russian occupation and not by the Germans. Shattered skulls were exhumed and taken back for forensic examination. One was that of a woman. It took over 50 years and the fall of communism before it was proven to be that of Janina Lewandowska, daughter of a leading Polish general. She had been in a flying club before the war. When her colleagues fought in the Battle of Britain, her brain had already been blown apart on Stalin’s orders in Russia.

To placate Stalin, Churchill tried to cover up the crime and stop the Red Cross investigation. The British and American governments handed Poland over to communist rule under Stalin after the war, banned Poles who had fought for Britain from participating in the Allied victory parades, and continued the pretence that the Katyn massacres were a Nazi crime. They even agreed to prosecute Germans at the Nuremberg trials, but this failed due to lack of evidence.

The pretence continued well into the Cold War. Opposed by the Russian and British governments, the Polish community only erected a Katyn memorial in Gunnersbury Cemetery in 1976 (see section “Katyn: insufficient evidence” below). Many young Poles including myself remember being told by influential British politicians that Poland must “accept its fate” as a member of the Russian Empire – until eventually Poles took the matter into their own hands under solidarity.

After communism fell in Poland in 1989, everything changed. Western governments had to accept that Katyn was a Russian crime, because Russian leader Gorbachev, in the spirit of Glasnost, admitted it himself. A Russian human rights group erected the plaque in Tver.

In 1992, President Yeltsin brought secret NKVD documents to Poland confirming that 25,700 had been executed on Stalin’s orders. One NKVD officer personally shot 7,000. Teresa, who was born on 12 April 1940, learnt that her father was on the execution list approved on 16 April. When he was held by NKVD thugs over a ditch and shot in the back of the head in a remote Russian forest on 17 April, he had no idea that a lovely daughter had been born to him far away in German occupied Poland just five days earlier.

Now, everything has changed again. One struggles to remember any statement by Trump or Boris, “leaders of the Free World”, that was actually true. Catherine Belton was told by a Russian banker that “the whole of US politics is for sale”. FBI director Mueller reported that Russia interfered to support Trump in the presidential election.

But Boris has successfully covered up a report on Russian interference in UK democracy. While Brexiter politicians rail against “Nazis, Stalinists and gauleiters” running EU countries that are supposed to be our allies, neither Boris nor Trump seems able to find an unkind word to say about Putin, who has been given Syria and has thousands of nuclear warheads pointed at London, New York and Washington.

Perhaps it is not surprising that Putin is now trying to rewrite the history of the Second World War, and that a Tver prosecutor claims there is no documented evidence of the massacres.

Katyn: “insufficient evidence” according to the Foreign Office

No-one under 55 today can remember the controversy surrounding the unveiling of the Gunnersbury Cemetery memorial on 18 September 1976, which was covered extensively by The Times and other papers at the time.

The Polish community had been battling for at least five years to find a site acceptable to an extremely reluctant British government. Two days before the unveiling, the Foreign Office said it did not have “firm evidence” that the Russians were responsible for the massacre and refused to take part in the ceremony. Whereas the US government was represented, British serving officers were ordered to stay away. Only Air Chief Marshal Sir Walter Merton, retired, was present and only at the last minute did the Royal British Legion decide to send a representative.

Wholehearted supporters of the Polish cause included Lord St Oswald, who called the government’s attitude “shocking and degrading”, and Airey Neave, Conservative MP. He criticised the “craven” attitude of the Labour government, because “we should honour the dead whatever the political circumstances of the day”, but added, rather interestingly, “no matter who did it”.

The Times declared that Churchill had a valid argument for refusing to discuss the facts during the war, but enough evidence had since emerged that the massacre occurred in 1940 when the area was under Russian control. One of the most famous journalists of the day, Bernard Levin, reported that many attended “to demonstrate their contempt for such creepy little things as the British Government and the Church of England, who had fought so hard to prevent the truth about the massacre being enshrined in a tangible memorial”.

At that time Poles still thought that 14,500 had been killed in the massacres. It was Russian leader Gorbachev who updated the number to 25,700 years later.

The controversy lingers today.  For example the Imperial War Museum’s website has this beautiful photograph of the memorial:

Yet it says underneath, perhaps because it also sent no representative, that who attended the ceremony is “unknown”.

In 1976 the Labour government was granting loans to the Russian government. Today it is the Russians who are suspected of helping to fund the Brexit campaign and the Conservative Party.