Is the path to a Middle East initiative through Israel-Palestine bilateral economic agreements, at the sacrifice of a Palestinian homeland and perhaps Israeli security? Or will a favoured two-state political solution, brokered by the Quartet, bring about a lasting peace? 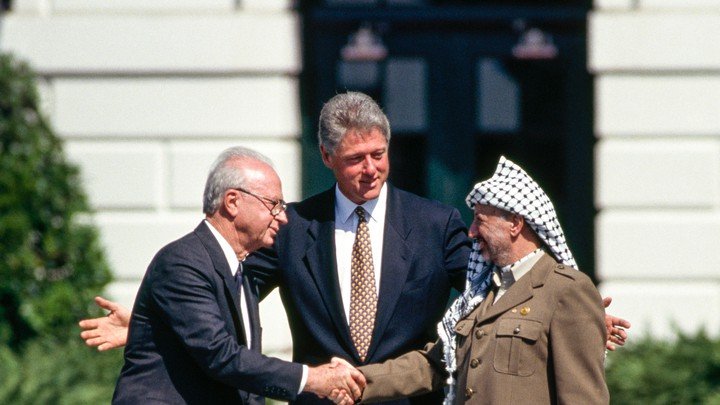 Bill Clinton with Yitzhak Rabin and Yasser Arafat at the White House in 1993.LARRY DOWNING / GETTY – the Atlantic

The welcomed ceasefire, as of this writing, comes on the heels of what some media outlets are calling the 11-day war. Another number to associate with the dead, the wounded and economic consequences.

In retrospect, it’s just another suspension of hostilities, a breather, in a war of attrition that has been raging far too long. Civilians on the receiving end of Israeli bombs or Hamas rockets have little say in the affairs of the state. They can only hope this ceasefire is not another wasted opportunity for a lasting peace.

Israelis and Palestinians are intrinsically entwined in pagan prophecy, religious fervour and historical mistrust. Yet both share a kinship, a love and passion for a land that in ancient times was called Palestine, Israel, the West Bank and the Gaza strip. To put land area into perspective, it is only 150 square miles less than Yorkshire, Durham, Northumberland and Cumbria combined.

Peace through weapons and trade

In the latter months of the Trump presidency, the United States brokered the normalisation of relations and, more importantly to the players, opened economic and trade ties between Israel and four Arab nations. Egypt and Jordan signed peace treaties in 1979 and 1994, respectively.

However these economic and trade agreements may involve a quid pro quo of the dangerous sort.

The uber bonus is access to Israeli markets and technology. Normalisation may be the path to diplomatic recognition but market availability is the crown jewel.

The Washington Post’s Fareed Zakara wrote that the Israeli economy is:

“…strong, diversified and advanced. Its trade and technology ties to countries have grown by leaps and bounds in the past two decades; countries such as Russia and India, once wary of Israel, now eagerly court the country and its tech industry. The reason that Arab countries such as the United Arab Emirates and Bahrain normalized relations with Israel has much to do with economic opportunities.”

A crack in Arab solidarity

Previously, Arab nations refused to discuss any political or economic agreements until Israel:

Considering the recent normalisation and trade agreements is there a crack in Arab solidarity? Is it a setback in the Palestinian fight for a homeland?

The 11-day war has been declared a victory by both sides. Not much of a surprise there. But is it safe to say Hamas in Gaza has boasting rights? It did take on the mighty Israeli military. Hamas:

However, the leadership of Hamas are, one would hope, realist. They survived a battle in a protracted war. Supporters around the globe who think Hamas, even allied with Hezbollah, Syria, Iran and a legion of foreign volunteers, can defeat the Israeli military are ill informed. Israel deployed only a minute portion of its military resources against Gaza.

In training, tactics and equipment alone, the military comparison is heavily in favour of Israel. It has a sizeable defence budget that is greater than any of its enemies, and vast air superiority. As a final resort Israel has its Sword of Gideon, an estimated 100 nuclear warheads.

Failed peace plans and rebirth of the Quartet

Peace talks with Israel cannot go ahead until the fractured Palestinian government gets its house in order. That aside, since the 1967 Six Day War there have been numerous Middle East peace initiatives tabled and dismissed by either or both sides for ideological, security or practical reasons.

Most governments and international organisations have championed the two state solution; Israel returning to its pre-1967 borders with an independent Palestinian state alongside with guarantees of peace and security.

Since 2014 there has been little movement in addressing the key issues of the Middle East peace process. In the US under President Joe Biden there is a perceived tectonic shift in policy to treat all actors into this Shakespearean tragedy as equals and re-engage the Quartet in backing a two state initiative.

Whether the US, UN, Russia and the EU can themselves agree to jointly mediate has yet to be seen. Since the UK is no longer an EU member it is yet to be determined whether or not Westminster will have a role in the peace process let alone have a seat at the negotiating table.

Public support for a two-state initiative in Israel, the West Bank and Gaza is varied. As with most polls the results depend on who has commissioned it and how the question is phrased.

Most rational people understand that something has to be done to stop the cycle of war, to stop the mutual distrust and find a common ground albeit not pleasing to everyone. The Quartet needs to make every effort to mediate, initiate, monitor and guarantee the peace.

There’s no doubt most people victimised by Israeli bombs and Palestinian rockets want something to change before the next time. Perhaps American humourist Will Rogers said it best. “Last year they said, ‘Things can’t go on like this’, and they didn’t. They got worse.”