the man credited with returning stability to the USSR’s successor state, the Russian Federation, appears in increasing trouble. 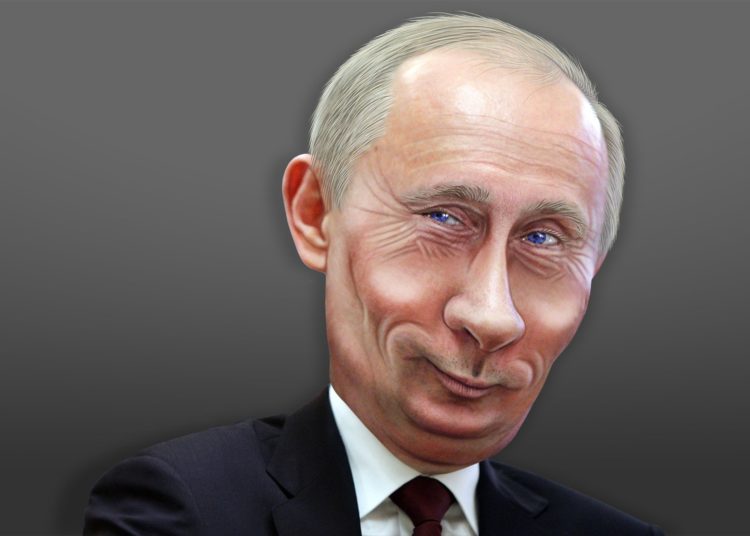 Vladimir Putin – Caricature by DonkeyHotey is licensed under CC BY 2.0

The end of the USSR in 1991 came as a surprise to most western observers and even to the majority of Soviet citizens. Now, nearly three decades later, the man credited with returning stability to the USSR’s successor state, the Russian Federation, appears in increasing trouble.

In power since January 2000, Vladimir Putin has technically solved the constitutional barrier to serving a third consecutive term as president, by changing the constitution. Amendments were approved by 77.9 per cent of voters on 1 July 2020, thus in theory allowing Putin to remain in power until 2036. This does not mean, however that he will do so. The ability to run again simply stops him becoming a lame-duck president and prevents the emergence of Putinite rivals in addition to opposition figures.

Putin’s popularity has been on a constant decline for many years. According to the respected independent polling organisation, the Levada-Center, his approval rating is currently on 60 per cent, down some 25 per cent from his early days as president; while the approval rating for the activities of the Russian government in March 2020 was a mere 48 per cent.

The apparently high endorsement of the constitutional amendments earlier this month does not disprove this. Turnout was only 65 per cent, despite voters being offered the opportunity to win valuable prizes. And certain amendments were clearly aimed at attracting specific interest groups: the indexation of pensions; the provision for the minimum wage to be no lower than subsistence level; the prohibition of same-sex marriage; and the development of respectful treatment of animals. All this along with references to Russians’ faith in God and the protection of Russia’s historical reputation (as interpreted by the State, of course) was meant to ensure populist plaudits.

Golos, an independent election-monitoring group, has severely criticised the vote, pointing out that monitors were appointed by the government and that opposition to the amendments could not be voiced in the government-controlled media. Since the vote, a campaign by the ‘NET!’ (no!) campaign to nullify the result has begun online and in flash-mob street-protests in Moscow and St Petersburg on 15 July. Despite arrests and the threat of heavy fines, protesters from a cross-section of society, not just hardened opposition figures, appear to be digging in for further confrontation with the authorities in the courts at the beginning of August. Further street protests are planned in provincial cities as well as protest votes at future elections.

Meanwhile, in the far-east city of Khabarovsk, unsanctioned street protests have been going on for over a week following the arrest of the region’s popular governor, Sergey Furgal. Furgal, a former businessman, was accused of involvement in multiple murders from before he was first elected to the Khabarovsk regional assembly in 2005. In 2018, Furgal unexpectedly beat the Kremlin’s incumbent candidate in the run-off for governor, due to his reputation for efficiency and caring about his region. Though he was standing for the Liberal Democratic Party of Russia, an ultra-patriotic movement with links to Germany’s NPD and France’s Rassemblement National, he was supported by a wide spectrum of voters, on the basis that he would put Khabarovsk first and shake up the system.

On 9 July 2020, Furgal was arrested and taken to Moscow where he is shortly due to be tried. The protesters simply do not believe the reason for his arrest can be anything other than the Kremlin’s nervousness at the popularity and success of a man who does not answer to Putin and who might one day rival him. So far, the police have held off from arresting any of the tens of thousands of protesters, though they are all technically guilty of breaking the law, as demonstrations of this kind are illegal without approval from the authorities.

The crowd’s placards tell the story: ‘Return Furgal to us’, ‘I am Furgal’, ‘Freedom for Furgal’ and ‘Furgal – our choice’. More troubling perhaps for the Kremlin is the carrying of the regional flag, since separatist threats, implied or otherwise, are unconstitutional. But the sentiment of Furgal’s supporters is clear: the Kremlin decides everything, but does nothing for us, and we have just had enough.

Exactly how Putin solves the current discontent remains to be seen. With the economy damaged by the impact of coronavirus and a collapse in the price of oil, he has little to promise to boost his falling support. Memories of the August Coup of 1991 may not let him sleep easy.