The governing PiS party in Poland is stoking nationalist rhetoric for political and electioneering reasons, with talks of 'Polexit' 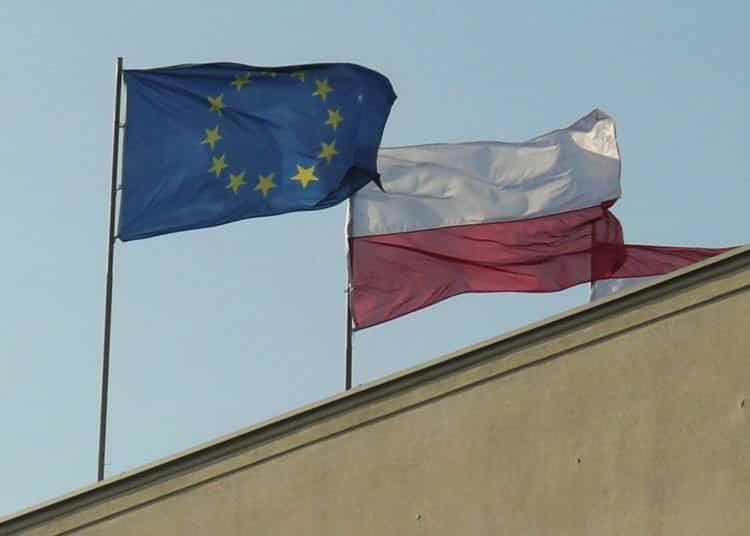 Flags of Poland and EU by MOs810 is licensed under the Creative Commons Attribution-Share Alike 4.0 International license

Poland joined the EU in 2004 (then still the European Community) with the hope that membership would finally bring security and freedom. In the first ten years of joining, Poland was indeed viewed enthusiastically as the model success story of the European Union’s eastward expansion. Most of its political leadership emanated from the much-admired Solidarity resistance movement. Since joining, it has shown steady economic growth year after year and was the only European country to survive the financial crisis of 2008 without suffering a recession. So why is every European journal writing articles now about a possible ‘Polexit’?

When the Law and Justice Party (PiS), under the leadership of Jarosław Kaczynski, won both the presidential election and the subsequent parliamentary elections in 2015, it brought in an economic programme based on direct monetary handouts to all Polish families with children and to farmers, and increased corporation tax, especially for foreign-owned companies. This pleased the rural population.

PiS also proclaimed a nationalist agenda to challenge foreign liberal cultural influences in Poland’s history and in education. It showed great zeal in pushing this agenda by seeking to monopolise control of the media and to subordinate the judiciary, so that its anti-liberal agenda would not be challenged in the courts.

The main state television TVP became a crude dispenser of government propaganda and a consistent critic of Western European values. Catholic media were given generous subsidies, while the opposition TV station TVN and independent newspapers are deliberately being starved of advertising revenue from state owned companies.

Poland in conflict with the EU

Where Poland has come into conflict with the EU is with the unconstitutional decisions by PiS over issues such the declaration of LGTB-free zones by some local authorities, or its threat to independent media. But above all, it was because of the reforms that undermined an independent judiciary.

Unable to fully dismiss all independent judges in the supreme court, the zealous justice minister, Zygmunt Ziobro, set up unconstitutional judicial bodies, such as the national justice board, or the disciplinary chamber that was supposed to punish judges that made decisions of which Ziobro did not approve. He also packed the constitutional tribunal with political appointees.

Tussles over the illegality of these bodies have caused the Court of Justice of the European Union (CJEU) to issue judgments demanding changes, but over a given period. The Polish government and its tame judiciary run rings around this – seemingly retreating, and then attacking on another front.

Polish defiance of the European court

A recent example was their temporary suspension of the disciplinary chamber, which Poland had been ordered to abolish as late as June 2022. Seemingly, it was a step back. But Prime Minister Mateusz Morawiecki, at Chairman Kaczynski’s instigation, then submitted a motion to the constitutional tribunal to declare that courts in Poland were in breach of the Polish constitution when subordinating their decisions solely to EU law,

So, the European court would not be allowed now to challenge the legality of how judges are appointed, or to support independent judges who refuse to work alongside the ones appointed unconstitutionally.

Furthermore, the tribunal warned if the “progressive activism of CJEU does not stop”, the European court’s rulings would be removed from the Polish legal order. In a public statement, Julia Przyłębska, the court president, declared that, “Organs of the European Union were carrying out a coup against Poland’s sovereignty”. This was seen both at home and abroad as a declaration of war against the European Union.

Is this a move towards ‘Polexit’?

In Poland, it caused mass protests with at least 100,000 marching in Warsaw, and other marches in over 100 towns and cities. The court decision was described as ‘Polexit’, a sort of Polish version of Brexit.

The foreign media worldwide also used the term ‘Polexit’. The German and French governments expressed their support of any measures that the European Commission may want to take, and the Dutch parliament called for withholding Poland’s €57bn share of the EU Covid-19 recovery plan. This was based on the agreement that any distribution of these funds would only be approved by the European Commission if a country’s national spending plan complied with criteria set out in EU law.

Morawiecki has called all talk of ‘Polexit’ fake news. He blamed the opposition for fanning this concept to cause unrest. But the government is taking an enormous gamble, as the latest opinion poll shows that 44 percent of Poles consider the tribunal decision wrong and only 28 percent were in favour.

Also, 80 percent of those surveyed want to stay in the EU. But only two months ago that figure was 87 percent, and although 42 percent of Poles now think that Poland could leave the EU, in September only 30 percent thought so. Opinion is slowly shifting.

For the PiS leadership this is a dangerous form of brinkmanship to ensure that they retain power at the next election, which is probably next year. They must maintain their anti-European stance to prevent right-wing nationalist support drifting to other right-wing parties, but must also retain support of the pro-EU countryside vote.

They do not want to lose massive EU funding, but they cannot lose face by stepping away from their challenge to the EU courts. They hope that the European Commission and the CJEU will be slow in their response and set deadlines for Poland a year in advance. By that time, the next election may have taken place and they could have secured re-election without losing any EU funding.

But matters could still slip out of control. An exasperated EU could still expel Poland; a confused electorate could still vote to leave in a referendum.

Yet the aim of PiS leaders is not to leave Europe, but to convert it. They want Europe to consist of 27 nationalist Christian states, just like Poland, thereby reversing the liberal agenda and challenging an exaggerated Muslim threat. It has to be remembered that a few days after he was appointed prime minister two years ago, Morawiecki told a Catholic TV station that the aim of his ministry was “the rechristianisation of Europe”.

He was not bluffing.