Last Friday Regan Russell, an activist who’s been campaigning for animal rights since 1977, died when she was hit by a lorry transporting pigs to slaughter. 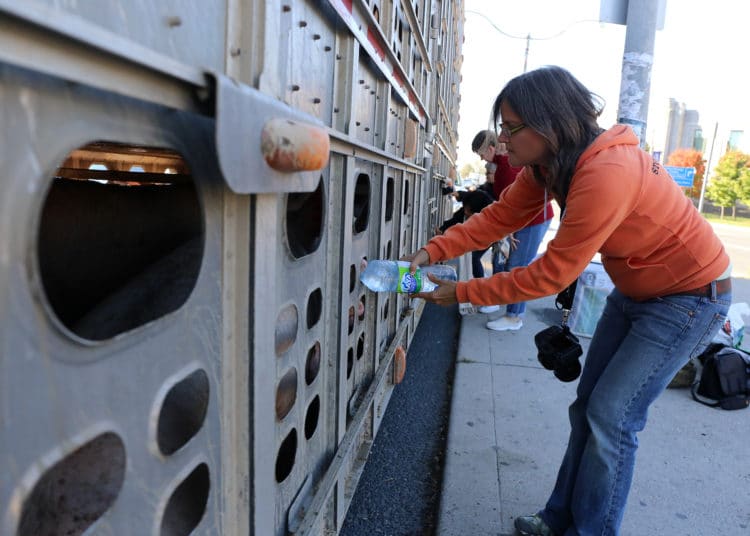 Last Friday Regan Russell, an activist who’s been campaigning for animal rights since 1977, died when she was hit by a lorry transporting pigs to slaughter.

It was a searing hot day and, like countless times before, she’d been feeding the terrified animals water through the slats in the side of the lorry trailer as it stopped on its approach to a slaughterhouse in Ontario, Canada. It was probably their first and last experience of human kindness and for Russell it was to be her final act.

Described by fellow campaigners as kind, elegant, intelligent and courageous, she devoted her adult life to exposing animal cruelty, including abuse of sled dogs and captive whales and dolphins. She had been arrested 11 times. She also helped rally demonstrators against an appearance by American comedian and sex predator Bill Cosby and recently joined in Black Lives Matter protests.

But her campaigning zeal focused on the plight of the thousands of pigs transported every day to her local slaughterhouse near Toronto at the end of their short and brutish lives on factory farms. Toronto Pig Save organises weekly vigils outside the slaughterhouse and its tactics have been copied by animal rights activists the world over.

The most effective protests always provoke a backlash. In a celebrated case, Toronto Pig Save’s founder Anita Krajnc was charged with ‘criminal mischief’ for doing exactly as Russell had – administering water to panting, distressed pigs on a hot day. The charge against Krajnc was eventually dismissed but a new Canadian law will soon make it illegal to “interfere” with animals in transit.

Such measures are unlikely to achieve their objective and will probably make campaigners even more determined. As Russell herself said when caught on camera on a mass protest outside a zoo for marine mammals “people say we’re breaking the law … how do you think women got the right (to vote)? How do you think slavery was abolished?”

Here in the UK the suffragettes would not have achieved the attention they deserved had they not been prepared to break the law and in the United States the 1793 Fugitive Slave Act, which required escaped slaves to be returned to their owners, sparked a campaign of civil disobedience which helped fire the nascent abolitionist movement.

Since the shocking public murder of George Floyd we’ve learnt more about the horrors of the slave trade than many of us ever learned in school. For example, we’ve learned the fact that up to 20 per cent of slaves died en route from Africa to the Caribbean, with dead or live slaves thrown overboard so frequently that the ships were often followed by schools of sharks.

Like 19th century human slaves, modern-day farm animals are tightly packed together to save space – and many die in transit from exhaustion, heat exposure or suffocation. This at least spares them the terror of the slaughterhouse. But before their final journey most pigs and chickens will have endured a pitiful existence, crammed together in concentration camps pervaded by the stink of their own urine and excrement, unable to express their natural behaviour and never knowing the feel of the sun on their backs.

Emancipating African slaves was a long, hard process because it suited the white establishment in the UK, America and elsewhere to play down or ignore their suffering and treat ‘negroes’ as inferior and less deserving. In the West Indies, missionaries preaching freedom for slaves were tarred and feathered.

Today the animal rights movement is pushing against an establishment that condones enslavement of billions of farm animals to satisfy the human appetite for meat. Activists who have never harmed anyone are subject to the same degree of state surveillance as suicide bombers. And last week, a Canadian woman who died trying to give water to a dehydrated pig was described as a “terrorist” on a newspaper website.

Gandhi said the greatness of a nation and its moral progress can be judged by the way its animals are treated. One day, humans will look back in disgust at the way we treat fellow sentient beings, with the same sense of collective guilt that white people now feel about black African slaves.