Kerry Pearson explains the history behind International Women's Day (IWD) and the significance of it across the globe. She also draws light to some inspiring female voices. 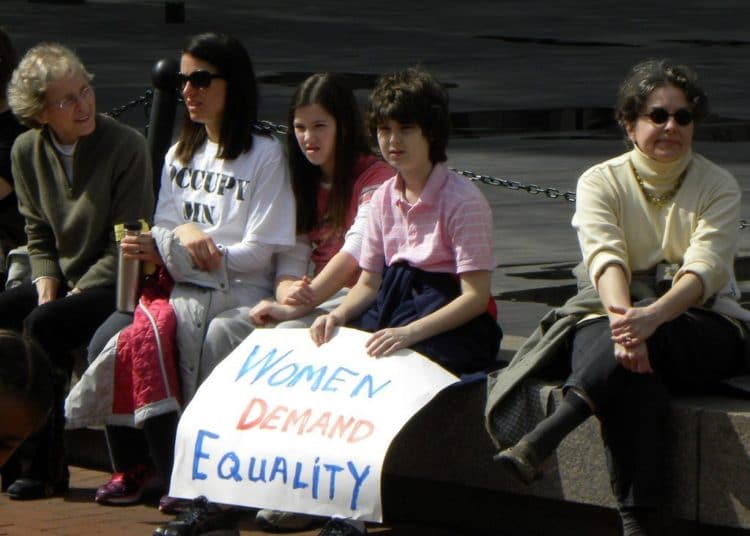 "Occupy Women's Rights - A rally to honor the many struggles for women's liberty" by Fibonacci Blue is licensed under CC BY 2.0

International Women’s Day (IWD), officially recognised by the United Nations in 1975, is the dedicated day to celebrating the social, economic, cultural, and political achievements of women around the globe, and to reiterate women’s plight.

Every day, every person is responsible for their own thoughts and actions, and we should all choose to challenge and call out gender bias. This year, the #ChooseToChallenge campaign on social media, aims to encourage people to commit to questioning stereotypes and challenging inequality. As Gloria Steinem, a world-renowned feminist, said, “the story of women’s struggle for equality belongs to no single feminist, nor to any one organisation, but to the collective efforts of all who care about human rights”.

So today, claim IWD as your day, and do your part to make the world a more inclusive place.

The history (or herstory!) of IWD

Since the early 1900s, women’s rights have been observed with IWD. The 20th century was not just a time for change in the industrialised world, but for gender rights too; women began protesting, demanding voting rights, shorter hours, and better pay. In 1911, IWD was honoured for the first time, when more than one million men and women rallied for an end to gender discrimination.

WWI then acted as a catalyst for women’s rights, and in 1914, women across Europe held rallies to campaign against the war and, in London, to support women’s suffrage. In 1917, on the first day of the Russian Revolution, which was also IWD (March 8), tens of thousands of women congregated with banners, demanding “bread and peace”. The strike continued until four days later, when the Czar was forced to abdicate, and women were granted the right to vote. It wasn’t however, until 1975 when IWD was celebrated for the first time by the UN.

Women’s rights are as important now as they were in 1914, and this year, the theme for IWD is ‘women in leadership: achieving an equal future in a Covid-19 world’. The campaign strives to draw attention to the ongoing role that women have played in recovery from the pandemic.

Jacinda Ardern, prime minister of New Zealand, has been acknowledged as one of the most effective leaders during the pandemic. Ardern’s brains and compassionate leadership have helped sustain productivity gains and keep the number of Covid-19 deaths in the country – with a population of 5 million – to just 26.

Other countries with female leaders have also experienced lower death rates than their neighbours, including Germany under the leadership of Angela Merkel. And yet, revealed by the UN secretary-general, women are still underrepresented in decision making in public life: women are heads of state in just 22 countries, and make up just 15 percent of FTSE 100 finance directors.

Closing the gender gap for women and girls is urgent across the globe. In Kenya and South Africa, where there are progressive legal frameworks in place to ensure every citizen can access education, women still encounter obstacles to higher education. They struggle to succeed in STEM courses and the social conditions they live under (cultural gender bias and sexism), stunt their academic growth.

According to the World Economic Forum, more than 12 million underage girls across the world are forced to marry every year – that’s about 30,000 every day. And women are also disproportionately affected by climate change-related disasters storms, floods and droughts kill more women than men due to the “unequal division of power and resources between men and women”. Thus, the fight for gender equality must continue.

Most, if not all of us, have women in our lives who inspire us and empower us. For me, and for many, this is my mother. But household names like Emeline Pankhurst, Betty Friedan, and Malala Yousafzai, are also recognised as some of the most inspirational women. And I want to use this opportunity as a chance to mention some other contemporary female role models, such as Amal Clooney, a human rights lawyer, and Nadia Murad, a Yazidi refugee. Both are paradigmatic examples of awe-inspiring women.

Clooney is Murad’s lawyer, and together they are working to bring the leaders of IS before an international court, for the genocide they inflicted on the Yazidis in 2014. Men were killed, women were raped, and children were torn from their families. Given that Amal Clooney is married to a film star and wears ‘nice clothes’, people are quick to underestimate her intelligence and commitment to her work. In fact, Clooney has always been hugely impressive; she speaks both French and Arabic, has worked for the UN tribunal, and continues to fight for human rights. When addressing the Security Council about the Yazidi Genocide, Clooney said:

“This is … the first time I have had a chance to address an audience in front of the UN secretary-general. I wish I could say that I was proud to be here. But I am not … I am ashamed … that states are failing to prevent or even punish genocide, because they find that their own interests get in the way … I am ashamed, as a woman, that girls like Nadia can have their bodies sold and used as battlefields. I am ashamed as a human being that we ignore their cries for help”.

Do we still need IWD?

Sadly, according to the World Economic Forum, none of us will see gender parity in our lifetimes. It’s possible that you do not see gender inequality or experience gender bias. But that doesn’t mean women elsewhere don’t experience it. As the world pulls itself out of a pandemic, women must be recognised and lifted to decision-making positions.

Today, let the women in your life know why they inspire you. “Every time a woman stands up for herself, without knowing it possibly, she stands up for all women” – Maya Angelou.