Tearing down the statue to Edward Colston is an historic moment for Bristol and a much needed history lesson about the British Empire for the rest of the UK. 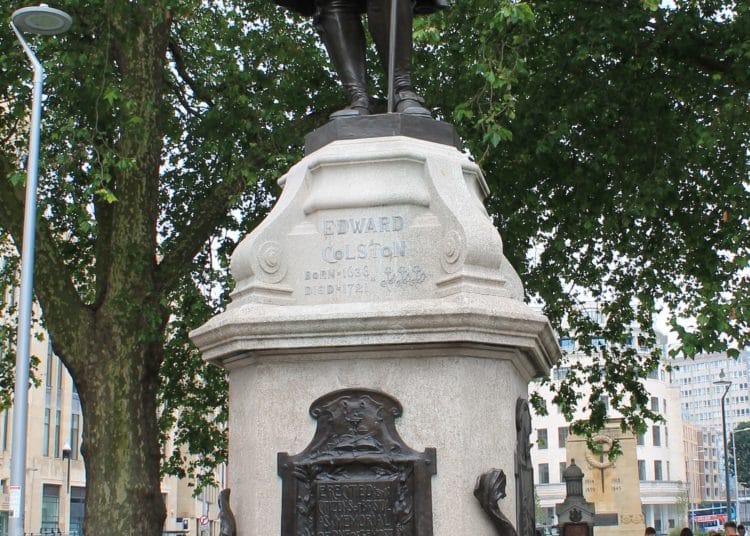 Tearing down the statue to Edward Colston is an historic moment for Bristol and a much needed history lesson about the British Empire for the rest of the UK.

The video clip of the toppling of his statue has demonstrated to us all how aggrieved members of the black community, and many other people, feel towards their city. A city that celebrates a native son who profited from slavery: from the subjugation of West African peoples. To get some insight into why a statue erected in 1895 can arouse such strong feelings, we need to examine the career of the man.

Edward Colston (1693–1721), a native of Bristol, rose to be a governor of the Royal African Company (RAC), which traded in gold and slaves from West Africa. Between 1672 and 1689 it is believed that Colston’s company sold 80,000 men, women and children into slavery in the Caribbean and the Americas. The RAC physically branded their slaves, including women and children, with its initials on their chests.

The RAC was formally headed by The Duke of York, brother of King Charles II, who later took the throne as King James II. At that time, the British establishment was immersed in the creation of empire. Following a bequest to the city of his birth, Edward Colston has an independent school, a concert hall, a high-rise office block, a street and an avenue name after him, as well as the statue that is now in the bottom of the harbour.

The good people of Bristol have tried to remove Colston’s statue by more conventional means. An online petition calling for removal of the statue had amassed thousands of signatures before last Saturday’s demonstration. The petition reads:

‘‘Edward Colston was a Bristol-born English slave trader, merchant and Member of Parliament. Much of his wealth was acquired through the trade and exploitation of slaves.’’

It goes on to say:

‘‘Whilst history shouldn’t be forgotten, these people who benefitted from the enslavement of individuals do not deserve the honour of a statue. This should be reserved for those who bring about positive change and who fight for peace, equality and social unity. We hereby encourage Bristol City Council to remove the Edward Colston statue. He does not represent our diverse and multicultural city.’’

No action was taken by Bristol City Council.

It is said that the British Empire came into being through British exceptionalism, based on ideas about racial superiority espoused by Cecil Rhodes among others. In his ‘‘Confession of Faith” which he wrote when he was 23 years old, he urged:

‘‘Why should we not form a secret society with but one object, the furtherance of the British Empire and the bringing of the whole world under British rule, for the recovery of the United States, for making the Anglo Saxon race but one Empire? What a dream, but yet it is probable, it is possible.”

The reality of the empire was that it was built on brutality and theft, boosting British national wealth while destroying local cultures. Establishing this empire also boosted the wealth of the individual men who created it, men like Rhodes and Colston among many others. Since 1833, when the British involvement in slavery ended with the Slavery Abolition Act, our role has remained largely hidden. As the Guardian said in this excellent article from 2015:

“The word slavery is more likely to conjure up images of Alabama cotton fields and whitewashed plantation houses, of Roots, Gone With The Wind and 12 Years A Slave, than images of Jamaica or Barbados in the 18th century. This is not an accident.”

Even today, people attempt to rewrite history to show the British as the good guys. See this Tweet from Leave.EU:

The reality is that 46,000 slave owners in the UK received a portion of what amounted to £13bn in today’s money. The slaves received nothing. The owners were compensated for their loss in freeing the slaves, because the slaves were considered property. Consider the Zong Massacre of 1781 where the slave owners murdered 132 Africans by throwing them overboard the slave ship Zong – our solicitor general found in favour of the slave owners, concluding that the slaves were not human beings, but “chattels or goods. Blacks are goods and property”.

The demonstration at the weekend was policed by Avon and Somerset Police. Chief Constable Andy Marsh has justified the actions of his officers on the ground during the tearing down of the statue. He pointed out that if his officers had defended the statue against the mob, we would now be contemplating images of the British police defending a renowned British slaver against local townspeople who wanted to dump his statue in the harbour. Perhaps not the image of modern policing that the government wants to convey.

There are however, voices in government who want to pursue this matter further. Home Secretary Priti Patel says the UK police have her “full backing” and the criminal minority will “face justice”. The prime minister likewise in his address last night said he would not “support or indulge those who break the law” and reiterated that he would not “support those who flout the rules on social distancing”.

No such similar statements were made when white people flooded the beaches for the bank holiday weekends, or when people crammed onto Westminster Bridge each Thursday night to clap for carers. By highlighting the disorder of the protests the government is distracting from the grievance of the protesters. It is seeking to dilute the message, and the message is that people have had enough of the racism that pervades British society.

When young people look for role models in the adult world, it is important that they see people that look like them, people living lives that they are inspired by and can aspire to. For too many young black, Asian and minority ethnic (BAME) people in the UK today, when they look at the adult world the people that look like them are cleaners, canteen workers, security and care workers. They do not see black chief executives, managers, entrepreneurs and holders of the high offices of state. See this excellent article from Hugh Goulbourne in Yorkshire Bylines yesterday.

This has to change.

In state secondary schools over 25 per cent of pupils are BAME. If we want to change our society going forward, and there are many that do, we would do well to cut the thread of racism that quietly permeates 300 years of British history.

Bristol could fish the Colston statue out of the harbour and put it in a museum: yesterday’s man, yesterday’s ideas. They could then ask the people of that great city who they think should be honoured with a statue in place of Colston.

That is the least the protesters deserve.