"The human family is standing on the beach watching a tsunami approaching. The big issue is … can we do anything to stop it? 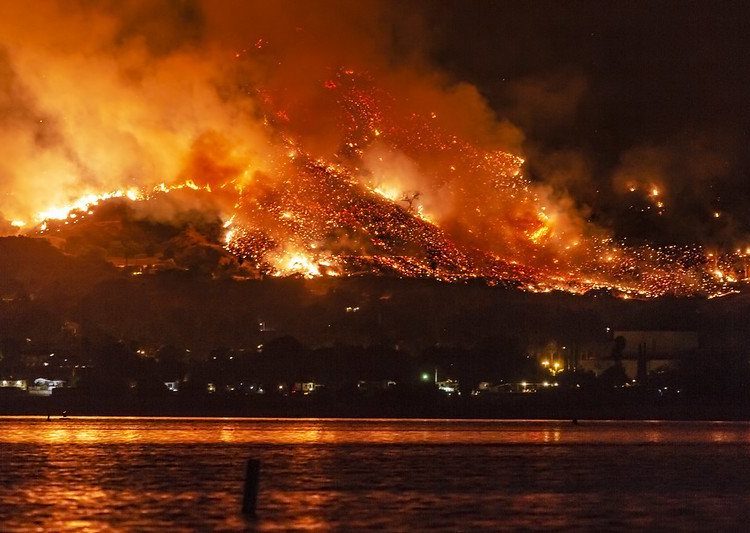 "California Wildfires: The Holy Fire At Lake Elsinore On August 9, 2018" by slworking2 is licensed under CC BY-NC-SA 2.0

The human family is standing on the beach watching a tsunami approaching. The big issue is … can we do anything to stop it?

The big climate science news is that 2020 was the joint hottest year on record. The importance of the COP26 conference in Glasgow has just shot to the top of world governments’ to do lists. Climate science and scientists tell us that global heating continues unabated despite the near collapse of the world economy due to Covid-19.

Matthias Petschke, director for space at the European Commission’s Directorate-General for Defence Industry and Space, said recently: “The extraordinary climate events of 2020 and the [C3S] data show us that we have no time to lose.

This data indicates the scale of the challenge we face if we are to restrict global warming and give ourselves a chance to mitigate its effects.

COP26, the international conference being hosted in Glasgow in November and chaired by the UK, is now a crucial moment for the world’s response to climate change and global warming. This is both a huge challenge and an opportunity for the UK government to demonstrate that it can use the current scientific evidence to achieve a major change in the direction of travel in the world’s society and economy.

News of record Arctic wildfires in the summer of 2020, 29 Atlantic tropical storms, and four million acres of California being lost to wildfires in 2020 brings a sobering reminder that the latest climate science data continues to give cause for concern. The news is more worrying coming on the back of a 7 percent drop in fossil fuel burning in 2020 as, despite this, the average surface temperature across the planet was 1.25°C higher than in the pre-industrial period 1850–1900. Climate change scientists think that to avoid the worst impacts of climate change, the rise in surface temperature must be limited to 1.5°C.

Evidence from the European Union Copernicus Climate Change Centre (C3S) indicates that the past six years have been the hottest on record. Europe had its hottest year in 2020, 1.6°C higher than the long-term average, with Western Europe experiencing a heatwave in late July/early August.

“2020 stands out for its exceptional warmth in the Arctic. It is no surprise that the last decade was the warmest on record, and is another reminder of the urgency of ambitious emissions reductions to prevent adverse climate impacts”.

“Despite the absence of the cyclical boost of El Niño to global temperatures [we are] getting dangerously close to the 1.5°C limit. Covid lockdowns around the world may have caused a slight dip in emissions, but the CO2 accumulating in the atmosphere is still going up fast. Unless the global economic recovery from the nightmares of 2020 is a green one, the future of many millions of people around the world looks black indeed”.

A temperature rise above 1.5°C could make large parts of the globe too hot for human habitation. This would lead to food shortages, competition for diminishing supplies of fresh water and agricultural land, and large-scale migration to cooler regions of the planet. Preventing this dystopian future drives the Paris climate agreement and COP26. The scientific message is clear. To borrow perhaps the most famous quote from the NASA programme, “Houston we have a problem”. The challenge for our government is … what can we do about it?

The good news for politicians is that scientists do not confine themselves to researching problems; they also enjoy proposing solutions, and are usually only too eager to share their solutions and visons of the future with anyone who cares to listen.

Ending our dependency on fossil fuels

Governments can speed this up by banning petrol and diesel cars as a priority, incentivising the sale of hybrid and electric vehicles and taxing travel within and between countries to reduce carbon emissions. Climate-friendly reforms might include taxing car owners for the distance they travel rather than a one-off annual road tax. Air travel could be limited to one journey per year, with anything extra taxed heavily or banned. And the sale of new petrol and diesel cars could be banned from 2025 and second-hand cars from 2030.

Investing in upgrading the country’s infrastructure

We are in the middle of a major housebuilding programme. Buildings account for fully 33 percent of carbon emissions. New builds do not appear to be embracing a zero-carbon future. They still have driveways for fossil-fuelled vehicles; surely they should have charging points for electric vehicles as standard. They are still heated by fossil fuels – this needs to change rapidly to ground source or air source heating.

The materials being used to build these new houses seldom embrace low-carbon solutions such as the use of wood, which is a natural carbon sink and can be made as strong as the more carbon-intensive steel and cement. This would create a bigger market for wood, which we could satisfy in the long term by funding reforestation as part of our new, post-Brexit, agriculture support to farmers. We could also ban the use of wood sourced from endangered forests of the world. ‘Global Britain’ could set the standard for this and fund replanting schemes at home and overseas as part of a global climate recovery strategy.

In the most developed Western economies, having children hugely enlarges your carbon footprint. We have to discuss world population growth. This can be a highly contentious issue both within the UK and abroad, and population size as an issue varies across the globe. The countries with the youngest, potentially most dynamic populations are all in Africa. The issue in the more developed Western economies is a lack of young people, with the UK having an aging population. This is good news for citizens who enjoy a longer life expectancy, but it does create the need for our country to attract younger citizens to serve the needs of an older, less physically able population.

In many less-developed economies, the priority has to be access to family planning services for those who want it. This goes hand in hand with access to education, especially for girls’. This comes on the back of the UK government reducing the overseas aid budget. We need to discuss prioritising admissions to young people to the UK who may wish to come here to work and make their lives here. This will boost our economy and help us care for our ageing population. Our immigration policy is fully in our own hands. We should use it to address long-term structural issues in the economy.

There is good news too on the international front. With the USA emerging from a dark period of isolation and abdication of global interest and responsibility with the election of President Biden and Vice President Harris, we can look forward to welcoming American drive and scientific knowledge adding to the success of COP26. President Biden has committed the USA to re-joining the Paris Climate Agreement on day one of his administration. That will add impetus to scientific search for global solutions to this challenge.

The UK must lead in taking ownership of climate change, work with others to mitigate its effects and forge a new and more productive relationship with our scientific community. The rhetoric we hear from ministers that they will be led by the science. Michael Gove famously claimed that ‘we have had enough of experts’. This raises the fundamental question, is this UK government going to be led by the science or not?

The human family has to act and act fast. The UK government finds itself in a unique position through its hosting of COP26 to exert a truly great effect on world history. We have a prime minister who has one eye on his place in history.

Now is his moment.