German elections reveal that support for the CDU is shrinking; and with Angela Merkel stepping down, who will be next to lead? 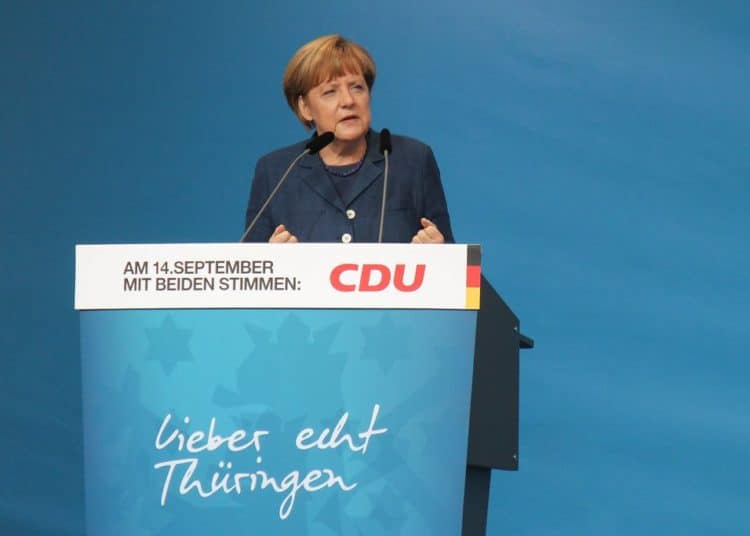 "Rede von Angela Merkel" by indeedous is licensed under CC BY 2.0

The cracks in the German body politic have now become fissures, as the country once praised for its handling of the covid pandemic, now lurches into confusion and recrimination. Angela Merkel has dominated the political scene for 16 years and her nickname ‘Mutti’ (mummy) is used with affectionate respect. The prospect of her long reign as chancellor drawing ominously to an end is bringing unease to a country that is a byword for political and economic stability.

Germans love their stability. Since the Federal Republic of Germany was founded in 1949, it has had eight heads of government, (chancellors), whereas Britain has had fifteen prime ministers in the same period.

In those 72 years, three chancellors (all conservatives – CDU/CSU)[1], Adenauer, Kohl and Merkel, have clocked over 40 years in office between them.

Only Willi Brandt’s victory for the Social Democrats (SPD) in 1969 was achieved on a wave of a promised change. Stability is what German voters seek.

That desire for stability is enshrined in Germany’s proportional representation (PR) system of voting. It is deliberately designed to ensure coalition governments, but to avoid fragmentation, with a minimum five percent of the votes required to get seats.

The German national elections under PR are held under a mixed system, with half the seats allocated on the basis of regional party lists and first past the post, but with a proportional top up. Voters can place one vote for an MP and one vote for a party list (where the party then assigns MPs based on its share of the vote). Significantly, even when the CDU/CSU achieved an overall majority of seats in 1957, Chancellor Adenauer chose to include the minority liberal party (FDP) in a coalition government.

(The FDP usually referred to as Liberals in the UK, but is the party of small business, minus the liberal social policies of the Lib Dems here.)

All German governments have been, and will remain, coalitions, so voters are keenly aware not only of their favoured party but also of the permutations of any eventual coalition government. Indeed, voters can allocate their two votes in the elections between different parties.

This situation pertains also to the regional elections. Germany is a Federal Republic where the regions (Lander) are ruled by coalitions. The recent regional elections in Rhineland/Pfalz and Baden Wurttemberg neatly illustrate the complexities of choice.

CDU to lose their leading role after German elections

The fall in the CDU vote means that the CDU are likely to lose their leading role in the Black/Green ruling coalition in Baden Wurttemberg (the CDU are known as the ‘blacks’, an indication of their religious affiliations). Whereas the Greens will most likely continue in the coalition with the Reds (SPD) in Rhineland Pfalz.

The two major parties in Germany, CDU and SPD, have been haemorrhaging votes and are no longer the grand all-embracing coalitions, on the right and left respectively, they once were.

The rise of the anti-immigration party AfD (Alternative for Germany) has eaten into votes on the right, whereas the rise of the Greens and the residue of left votes in the former Eastern Germany for the Left Party (Die Linke) has sapped the SPD. In addition, the SPD has lost its cutting edge by joining the national grand coalition under Merkel.

A traffic lights coalition is the best the SPD can hope for in the general election and amazingly only as the junior partner to the Greens.

It is still unclear who will succeed Merkel as the CDU/CSU candidate for chancellor. Merkel has failed to nurture and promote a successor. For a while, Ursula van der Leyen looked the part, but errors of judgment as minister of defence meant she was shunted off to Brussels.

Who will lead CDU next?

The CDU party has a lacklustre new head, Armin Laschet, but significantly he has not been endorsed as the CDU’s candidate for chancellor. A serious frontrunner is Markus Soeder, minister president of Bavaria and leader of the CSU, the CDU’s junior partner. However, having the chancellor candidate come from the junior, regional and more right-wing partner would be quite would be quite a shift.

In addition, the CDU is struggling reputationally, as two of its MPs have had to resign because of having made personal gain from the award of covid-related contracts. Public confidence in the government’s handling of the covid crisis has plummeted from (self) satisfaction to near panic.

Much now depends on whether Merkel can use the rest of her time in office to render service to her party.

The latest polls after the regional elections indicate just how fractured German politics has become.

A national coalition government of three parties now looks inevitable, and such a coalition seems destined to include the Greens.

The Greens have been in national coalition before (1998–2005 with the SPD) but come September, after the German elections, Europe could see a seismic change with the Greens as the major party in a traffic lights coalition.

The origins of the German Greens began with the late sixties commitment to the “long march through the institutions”. Come September the Greens may reach the pinnacle of the German political state.

Michael Hindley is a former MEP who studied in West Berlin and lectured at the German universities of Greifswald and Gottingen.