The stand-off between Lukashenko’s administration and the opposition continues, with hundreds of thousands attending demonstrations. 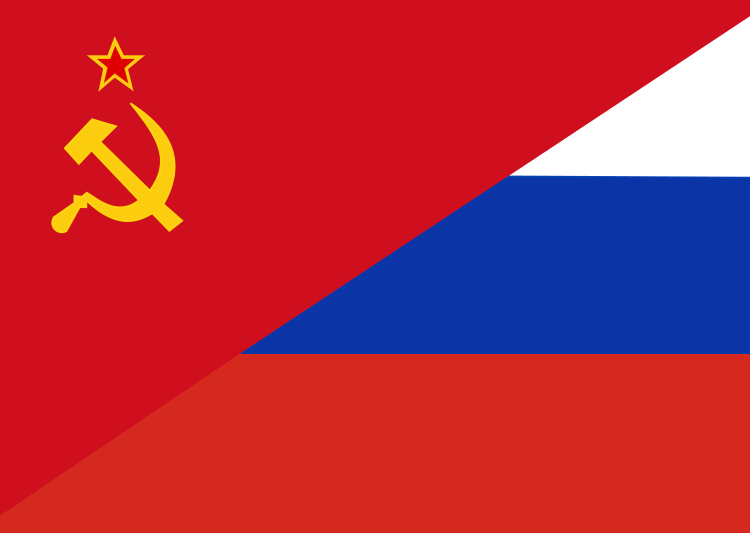 Flag of the Soviet Union and Russia by Elborgo is licensed under CC BY-SA 3.0

If we in the West seem currently beset by terrible problems, spare a thought for those inhabiting post-Soviet space where currently social tensions, political conflicts and outright war exist in at least seven of the 15 former Soviet republics.

In Belarus, the stand-off between Lukashenko’s increasingly thuggish administration and the opposition continues, with hundreds of thousands attending weekend demonstrations in Minsk and other cities and the continued arrests of activists regardless of age, sex or state of health. The masked special forces have now sunk to the level of beating up pregnant women and roughing up elderly ladies.

Since Lukashenko’s secret inauguration on 23 September, sanctions have been imposed on Belarusian officials by the West, first of all by the UK and Canada and finally by the EU after Cyprus removed its veto, having obtained a satisfactory EU response to Turkey and its drilling in the Mediterranean Sea as well as its role in the conflicts in Syria and Libya. As many as 40 officials are targeted for their roles in vote-rigging and repressive measures, though not Lukashenko who heads the British and Canadian list. After this, the US also imposed asset freezes and travel bans on eight officials.

Retaliatory sanctions have been imposed by Belarus. With more than 12,000 people arrested and all significant opposition leaders in exile or prison, it remains to be seen how the battle will pan out. But the demonstrations keep on happening as well as numerous acts of creative protest such as the painting of park benches in the colours of the opposition or the daubing of walls with anti-Lukashenko graffiti.

More serious damage to the regime has been done by Cyber Partisans of Belarus, who have successfully compromised a number of the country’s IT systems, revealing the names and addresses of a number of serving officials in the Ministry of the Interior, causing the payments system of the Belarusian National bank to crash and paralysing systems of the tax office, the state lottery and the stock exchange. Lukashenko was even briefly added to the police wanted list.

After Sunday’s elections in Kyrgyzstan in which only four of the 16 contesting parties appeared to have won enough votes to enter parliament, protesters gathered on Monday, 5 October, and went on to storm government buildings and parliament itself. Not one of the genuine opposition parties won a seat and on Monday in a joint declaration, they refused to accept the results as free and fair.

By Tuesday morning (6 October), prominent opposition figures had been sprung from prison, and the Central Electoral Commission had declared the results null and void. By 7 October, according to the authorities, at least 900 had been injured and one person had died in the chaos on the streets as politicians attempted in a newly formed Coordination Council to find a successor to Prime Minister Kubatbek Boronov who has resigned. The pro-Russian President Sooronbay Jeenbekov fears he too is under threat and has appealed to opposition leaders to calm their supporters.

In Russia, there are continued repercussions from the poisoning of Alexey Navalny and the limited gains by opposition parties in the local and regional elections of last month. The Kremlin has accused Navalny, now recovering from Novichok-poisoning in Berlin, of working for the CIA. Navalny has alleged Putin is behind his poisoning and, as a result, is likely to be refused re-entry to his homeland where his smart-voting app would be used to oust as many United Russia deputies from the State Duma when elections are held in September next year.

In a tragic turn of events on 2 October, Irina Slavina, editor-in-chief of the independent Koza Press website set herself on fire in front of an office of the Ministry of the Interior in Nizhny Novgorod. The journalist had been harassed for some time by the authorities because of her links to Open Russia, the organisation advocating democracy and human rights founded by exiled oligarch Mikhail Khodorkovsky. Earlier, she had written on Facebook that people should blame the Russian Federation for her death.

In a different kind of protest, on 7 October, members of the activist collective Pussy Riot succeeded in attaching LGBT+ flags to a number of buildings in Moscow, including those of the FSB (Security Agency), Supreme Court, Office of the President, and the Ministry of Culture. Pussy Riot claim these were birthday-presents for Putin, symbols of “the lack of love and freedom” in Russia. The group is calling on the president to investigate the abduction and murder of gay people in Chechnya and for a halt to discrimination in law and in society.

The most serious development in the region in recent days has been the eruption of armed conflict between Armenia and Azerbaijan over the disputed territory of Nagorno-Karabakh, a mountainous enclave inhabited mainly by Armenians deep inside neighbouring Azerbaijan. For 12 days now, shelling and gunfire have resulted in the destruction of buildings and many casualties inside the territory. Russia is an OSCE mediator (Organization for Security and Co-operation in Europe) and might appear to want to stay ‘neutral’. It has to defend Armenia because they are both in the Collective Security Treaty Organization (CSTO). Meanwhile Turkey is giving heavy support to their friends in Azerbaijan.

The dispute is not new and in recent years has been ‘smouldering’, with frequent deaths across the line of contact and a significant flare up in 2016. Azerbaijan is promising to cease military action if Armenian troops withdraw from occupied territories around Nagorno-Karabakh, while Armenia says it will make concessions but only if Azerbaijan does too. There is a danger that this conflict will escalate into a full-scale regional war.

In Ukraine, sporadic fighting continues in the Donbass area between Ukrainian and occupying Russian forces, while Georgia remains unable to recover its lost territories of Abkhazia and South Ossetia which pose as independent states recognised only by Russia and its client states.

With coronavirus cases rising throughout the area, citizens of these countries are truly having a terrible time. However, those campaigning for social change, democracy, the defence of their homeland or, conversely, its liberation all seem determined to succeed, even if success lies some way off. Observers will be watching closely how these fascinating, yet often tragic struggles, progress in the months to come.