One week after the election that, according to the regime, saw Aleksandr Lukashenko re-elected for a sixth term, the political crisis continues to escalate. 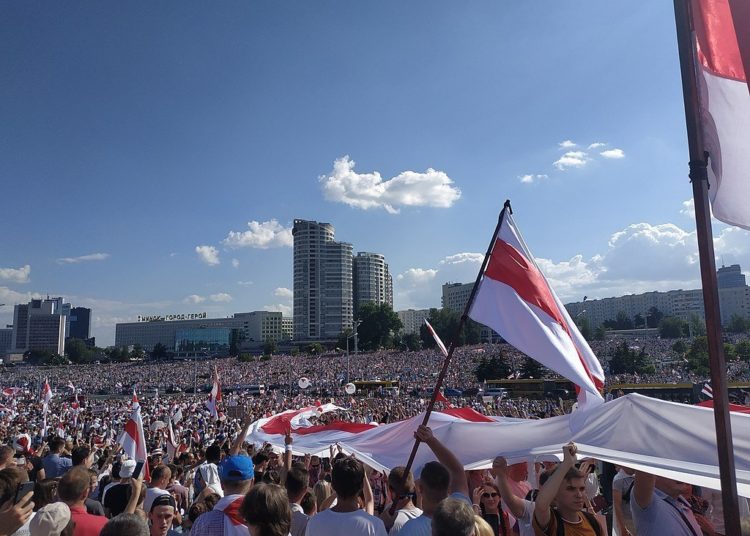 One week after the election that, according to the regime, saw Aleksandr Lukashenko re-elected for a sixth term, the political crisis continues to escalate.

On the morning after last Sunday’s vote, the main opposition candidate, Svetlana Tikhanovskaya, lodged a complaint at the offices of the Central Electoral Commission in Minsk, challenging the result which gave her a mere 10 percent and citing ballot-rigging and other forms of electoral fraud. Tikhanovskaya was detained and escorted into exile in neighbouring Lithuania along with her campaign manager, Maria Moroz, who was arrested on the Friday before the election.

In a YouTube post, recorded while in custody in Minsk, the 37-year-old ex-teacher said she had overestimated her strength, but had turned out to be the same weak woman she always was. This stands out as a continuation of Lukashenko’s misogynist narrative used in his election campaign against her. She also implied she had given up the fight to replace the unpopular incumbent due to threats made against her children. Gradually, over the course of the week, protests grew throughout the country as well as in foreign capitals where a disgruntled diaspora could protest without fear of the unprecedented violence and intimidation that was unleashed on protesters in Belarus itself.

The authorities attempted to stop the opposition organising by cutting off the internet and interfering with telephone links. By Saturday, 7,000 had been arrested, many brutally beaten and held in inhuman conditions reminiscent of the worst excesses of Stalinist or Nazi oppression. Though many have now been released, it is at the cost of promising to give up their protests and struggle for justice and change. At least two protesters have died, including 25-year-old Alyaksandr Taraykouski, who was apparently shot, though the authorities claim an explosive device went off in his hands during a protest near Pushkinskaya metro-station on Monday last.

The authorities’ tactics and violence have been resolutely condemned by leading political and cultural figures inside Belarus and beyond. The country’s renowned Nobel prize-winning oral historian and essayist, Svetlana Alexievich, who has chronicled the horrors of twentieth-century Soviet and post-Soviet suffering, called in an interview on 12 August with Radio Free Europe / Radio Liberty, for Lukashenko to go to avoid a bloody civil war. Alexievich suggested the riot police used in Minsk had been brought in from Moscow. While those in provincial cities had largely refrained from beating the crowds and some had actually joined them, those in Minsk were cruelly beating peaceful protesters. It seemed to her that “their guys would not be capable of beating their own mothers and sisters in this way”.

On Saturday, Belarus’ ambassador to Slovakia, Igor Leshchenya voiced his support for the protests in a video posted by the weekly Nasha Niva. In it, he says he, “stands in solidarity with those who came out on the streets with peaceful marches so that their voice could be heard”. CSKA Moscow’s centre-forward, Ilya Shkurin, also announced on Instagram that he would refuse to play for his country until Lukashenko steps down. EU foreign ministers have agreed to impose sanctions targeting those responsible for the brutal crackdown, and the White House has said it is “deeply concerned” by the violence.

On Friday, Tikhanovskaya appeared to gain new heart as she called for a weekend of peaceful rallies. These culminated with more than 400,000 turning out in central Minsk on Sunday, according to Nasha Niva. The crowd was predominantly young and impassioned, contrasting strongly with the older generations which made up the few thousands of Lukashenko supporters who listened to the president’s rant about foreign puppet-masters controlling the protesters, whom he called “rats who would soon crawl out of their burrows again even if pacified for a while”. It was reported by the independent website Tut.by that, in true Soviet fashion, workers from state enterprises had been instructed to turn up to Lukashenko’s rally or face the sack. For Lukashenko, the threats were that the western borders of the country could be moved closer to Minsk and their pre-World-War-2 positions, and that the security of the Union State (of Belarus and the Russian Federation) was imperilled.

Putin has promised in telephone calls with Lukashenko that Russia will offer help in accordance with the Union State treaty. This will perhaps be telling, for Belarus is not, in fact, being threatened by external powers. There were no EU flags amid the sea of red-white-red nationalist flags and symbols at the weekend and no calls to join NATO from the opposition. Even before the vote, the Russian veteran nationalist politician Vladimir Zhirinovsky was calling for Lukashenko to step down. It could just be that instead of tanks, Putin offers his erstwhile ally a retirement dacha.