Jeffrey Epstein was not the first monster in Ghislaine Maxwell’s life. That ‘accolade’ goes to her late father Robert Maxwell 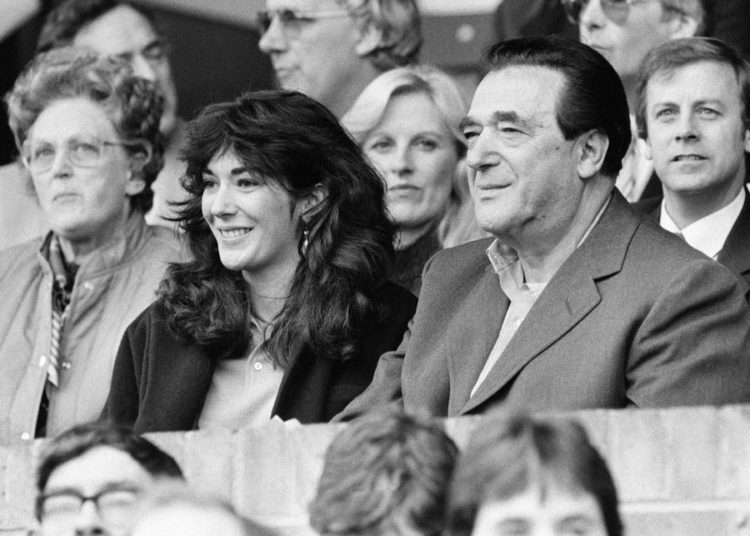 Robert and Ghislaine Maxwell at an Oxford United v Brighton game in 1984. He bought Oxford United and made his daughter a director. Staff / Mirrorpix / Getty Images

Jeffrey Epstein was not the first monster in Ghislaine Maxwell’s life. That ‘accolade’ goes to her late father Robert Maxwell, newspaper proprietor and one-time Labour MP, described by those who knew him as a confidence trickster, cheat and bully, who bamboozled corporate Britain in the late 1980s and early 1990s and swindled his way to a fortune.

Like Epstein, a multi-millionaire hedge fund manager, he used his wealth to control and manipulate people. Like Epstein, Maxwell is believed to have taken his own life to avoid his crimes. Rather than the indignity of a prison cell, ‘Captain Bob’ preferred to drown off the dark waters of the Canary Islands, his floating body quickly transferred to a cemetery at the Mount of Olives, fuelling much ‘did he jump or was he pushed’ speculation.

Maxwell had been on a cruise on his private yacht when he was said to have received a fax informing him that the game was up: he was the No.1 suspect in the biggest fraud in British corporate history – the theft of £460m from the Daily Mirror’s pension fund. His elaborate web of lies and fake businesses was unravelling; which makes the suicide theory more likely, according to former Mirror editor Roy Greenslade.

The yacht itself yielded no clues. But its name links father and daughter forever: the Lady Ghislaine.

Ghislaine was born in 1961 – the youngest of nine children. Her mother, Elisabeth, a quiet academic, appears to have been the calm centre of the storm of Captain Bob’s explosive temper and violent nature. Not so his employees, or the children, bar one that is: the baby of the family, Ghislaine.

Daddy’s Girl could do no wrong. The price, though, was tyrannical control: boyfriends, or at least visible ones, were forbidden. Ghislaine spent a lot of time alone with Maxwell on the yacht and later became his trusted confidante and emissary. But she was not obviously embedded in the business, so in the end it was two brothers, Kevin and Ian, who took the flak.

After covering her father’s tracks on a swift visit to the yacht, and while outrage was mounting over his crimes, Ghislaine quit town, flying Concorde to America.

Settling in New York was not hard: a £80,000-a-year trust fund set up by her father, out of the reach of a string of furious creditors, certainly helped. Plenty of time for parties, and in between selling real estate, she moved in the ‘smartest’ circles, winning over the rich and powerful, just like she charmed her dad.

A young Donald Trump was part of that scene, as was Harvey Weinstein, according to the New York Magazine. But it was in Jeffrey Epstein she found her sugar daddy. Even after their romantic relationship faded, she continued to manage his mansions and, as the New York Times drily puts it, his “insatiable appetite for massages”.

Court papers in Florida are said to shed more light on her role as Epstein’s procuress of underage girls, one of whom, Virginia Giuffre (née Roberts), is famously pictured virtually in flagrante delicto with Prince Andrew – Maxwell herself smirking on.

The women likely to testify include the Farmer sisters. In a 1996 civil case, Maria claimed Epstein sexually assaulted her and later went on to grope her 15-year-old sister Annie. In the same case, Sarah Ransome was explicit about the role Maxwell allegedly played as madam to the young girls in her charge and in actively sex trafficking. This case, and one other, was settled out of court.

In 2016, the net closing in on her, Maxwell went to ground, only returning to the spotlight last year after the arrest and death of her mentor, and following her friend Prince Andrew’s notorious Newsnight interview.

For the press the hunt for her, said the New Yorker, was a game of ‘Where’s Waldo?’ – the US equivalent of our Where’s Wally? The Sun even offered a £10,000 reward for details of her whereabouts. Last August a picture came to light of her seated outside a hamburger bar with half-eaten burger and fries. Was it designed to throw the press and investigators off her trail? One post on Twitter joked “Ghislaine Maxwell spotted … wearing a ‘Not involved in human trafficking’ T-shirt.”

This year her final bolthole was a remote New Hampshire property dubbed Tuckedaway. Not tucked away enough though: tracked down by the FBI and facing her day in court, Maxwell is said to have sobbed down the phone, “Why is this happening? How could this happen?”

Careless of the young lives she ruined, convinced for so long she would get away with it, this was the authentic voice of an entitled, spoilt woman finally coming to terms with reality. Both her father, and the man she is said to have loved, avoided that reckoning. For 58-year-old Ghislaine Maxwell, now languishing in a Brooklyn detention centre awaiting trial, there is a lot more agony to come. And plenty of time to reflect on a life where the whims of powerful men were all that mattered and the lives of her own sex hardly mattered at all.