Putin’s expansionist mindset threatens Ukraine’s sovereignty, and is acting as a distraction from Boris Johnson’s lies and sleaze. d 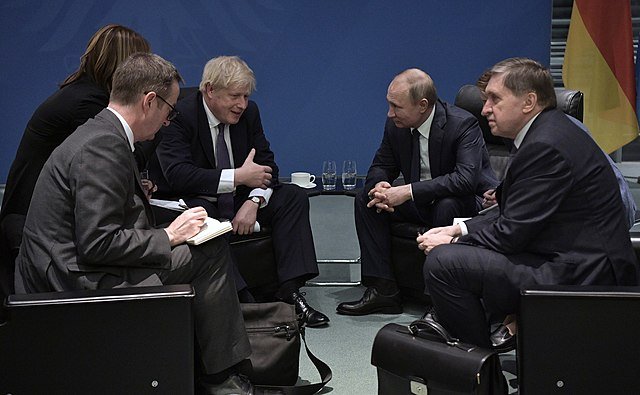 Johnson and Putin; kremlin.ru, CC BY 4.0

The most important cause of what is happening in the Ukraine right now is the mindset of Vladimir Putin. It isn’t particularly hard to figure out what that is. He has said often enough that he thinks the collapse of the old Soviet Union was one of the great tragedies of history and has a track record of expanding Russian territory whenever he can. In such circumstances, when satellites spot a hundred thousand troops and their equipment approaching the borders of Ukraine it would be naïve in the extreme to think that there was no danger of an attempted annexation of some territory.

The most likely objective for Putin is to try and take the north-eastern part of Ukraine. A very high proportion of Russian people would back this because they don’t really believe that Ukraine should have a different future to Russia.

Putin would love to bring the part of eastern Ukraine where more people speak Russian than Ukrainian inside Russian borders. Indeed, it is possible that significant parts of the population of this area might genuinely prefer to be under Russian control. Some of the behaviour of the most extreme Ukrainian nationalists over their right to speak the language of their choice has played a big part in encouraging them in that direction.

If Putin chooses to invade that part of Ukraine he will have little difficulty in selling to the Russian people the message that his big heart won’t let him ignore the plight of those Russian speakers any longer and they must be brought back within the family whatever the price.

One huge problem with this is that Putin’s regime isn’t exactly a model of fairness, honesty and focus on the wellbeing of the ordinary citizen. He runs a brutal regime that routinely murders or jails opponents such as Alexei Navalny who has now been in jail for over a year for daring to complain over being deliberately poisoned after he released a video about the luxury palaces occupied by Putin’s oligarch friends.

The other big problem is that Putin doesn’t exactly have a great track record of looking after the best interests of neighbouring states that fall under his control. Belorussia may be nominally independent, but its authoritarian regime is utterly dependant on support from Putin who helped to put down the recent popular uprising.

Any part of Ukrainian territory that is placed under the direction of Putin’s chosen puppet leader, is not going to enjoy freedom of speech and the right to make choices about their own future. It is going to be subject to the same far right exploitative regime that is currently sucking everything it can out of Russian territory and squirrelling much of it away in London.

Putin is out to capture Ukrainian territory not Ukrainian hearts and minds. He is interested in his own aggrandisement and in distracting Russian citizens from asking awkward questions about why there is so much despair, drug use, environmental damage and economic misery in a country that is extracting enormous quantities of valuable natural resources every year.

Nationalism is a very effective way of distracting some people from the real source of their problems.

Which is where Boris Johnson comes in. The crisis on Ukraine’s borders is real and is not of his making. Yet it is incredibly convenient for him. What better way of taking people’s minds off his lying, cheating incompetence than to try and turn himself into the great statesman and ask the British nation to get behind him at a time of national crisis?

The truth is that Britain simply has no military force capable of providing any significant assistance to Ukrainian forces trying to hold back a Russian attempt to annex territory. The only thing Johnson does possess is the ability to utter bombastic phrases that can be used by Russian TV to convince people that the invasion needs to take place.

How (not) to deal with Putin’s Russia

The most effective ways of dealing with Putin are to reduce consumption of his oil and gas and to exert proper control over the foreign bank accounts that are lodged in places with weak legislation like Britain. That takes time, patience and determination.

The most ineffective way is to make empty threats that can’t be backed up. Johnson has proved excellent at speaking loudly and carrying a small stick. Whilst failing totally to act on dodgy Russian finances housed in London.

The Ukrainian people have endured one of the harshest and most dramatic histories of anywhere in the world. Kyiv was a city of sophisticated Christian scholarship and of golden domed architecture when Moscow was a tiny village in a swamp.

Much of that was ruined by the invasion of Mongol forces in 1240 when over 95 percent of the population was wiped out. It was only under Catherine the Great in the late 18th century that it released itself from the heritage of cruel authoritarian control and extraction of tribute that the successors of the Mongols inflicted and only then that it came under Russian control.

Since then it has experienced Tsarist rule that copied far too many of those authoritarian controls; a German occupation towards the end of the First World War; a civil war in which nationalists, imperialists, republicans, well-organised anarchists and communists fought for control; an aggressive nationalisation and collectivisation of its land that generated a horrible famine that killed millions; invasion by Nazis from Germany, Rumania and Italy; re-occupation by Soviet troops that involved many brave Ukrainian and Russian fighters who were then close and important allies of the United Kingdom; the removal of its bravest and boldest citizens to die in the gulags; the incompetent chaos of Gorbachev; and then corrupt oligarchs stealing everything they could.

After that set of experiences, the people of Ukraine deserve the right to a period of peace, prosperity and stability in which they can rebuild their proud traditions and make the most of some of the most fertile land on the planet.

We must all hope that the huge risks involved in this adventure eventually sober up the self-interested politicians and the Ukrainian people can get on with their lives without fear of invasion on a trumped-up pretext.

The token effort that is levelling up