Michael Hindley writes about the history of Council of Europe (which is often confused with the EU); Churchill was ardently in favour of its creation. Out of the Council came the European Convention on Human Rights (later the ECHR) which was essential at the time of the collapse of the USSR. 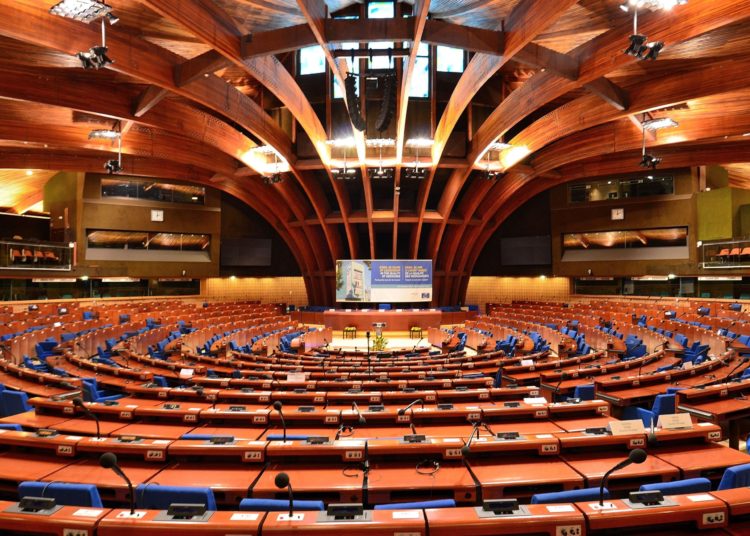 “File:Plenary chamber of the Council of Europe’s Palace of Europe 2014 01.JPG” by Adrian Grycuk is licensed under CC BY-SA 3.0

The annual celebration of Europe Day (9 May) commemorates the 1950 Schuman Declaration (Robert Schuman was the French Foreign Minister). The declaration is seen as the beginning of the integration of Western Europe that eventually became the European Union (EU). The declaration called for “peace, solidarity, diversity and unity in Europe”. The hostilities of the Cold War meant that the cooperation was confined to Western Europe until the fall of the Berlin Wall in 1989.

This aspiration for a united Europe gave rise to the Council of Europe, which is still largely unknown in the UK. However, it remains a forum for European cooperation where the UK can have a positive impact. Although the UK is no longer a member of the EU, we are still members of the Council of Europe.

The Council of Europe and the EU are frequently confused and, in the case of the British anti-European movement, deliberately so.

The Council of Europe: a history

In fact, the Council of Europe predates the EU. It was set up with much the same idealism as the United Nations (UN) had been in October 1945. The Cold War was freezing over by the time the Council of Europe was established in 1949, and so it remained a largely Western European institution until the era of détente and the eventual collapse of the Soviet bloc.

Ironically, given the UK’s subsequent hesitations about membership of the European common market, our involvement was absolutely essential to the founding of the Council of Europe. Churchill’s oft-quoted call for European union, in a speech in 1943, was in favour of a ‘council of Europe’, and not as some like to believe a ‘common market’.

The founding principles were agreed at the Congress of Europe in The Hague in 1948. This established an ‘intergovernmental’ arrangement, not a federal one – made up of a Committee of Ministers and a consultative assembly of parliamentarians, the Parliamentary Assembly of the Council of Europe (PACE).

The actual Council of Europe came into existence through the Treaty of London in May 1949. It is ironic that hostility exists towards the “interference” of an institution that owed its very existence and inspiration to our country.

The European Convention on Human Rights

The inspiration was the UN’s Universal Declaration of Human Rights of 1948. The application of a similar set of principles for Europe was a direct consequence of lessons learned from the suppression of rights by the Nazis, and the desire to have a higher legal and moral authority than the policies of governments. Many miscreants offered the excuse of “only doing my duty”, because Nazi law was the law.

The ECHR makes judgment based on the European Convention, which includes the prohibition of torture and forced labour, and enshrines the right to a fair trial. In effect, it is a Supreme Court for Europe. Government can bring cases, as can citizens.

The principles of the ECHR were a useful democratic road map for the countries of the former Soviet bloc. And having access to the ECHR for citizens there, has been an important guarantee of human rights.

The guarantees in the ECHR are minimum standards; any state can extend rights beyond these standards.

Parliamentary Assembly of the Council of Europe

The other important part of the Council of Europe – the PACE – is made up of delegates from member states and, in the case of the UK, Members of Parliament. Readers may wish to find out if their local MP is a delegate and find out what they do in Strasbourg, through the UK parliament website

The PACE has been rightly criticised for its hesitancy over holding member states to account, for example on questions of press and political freedom in Poland and Hungary. The PACE is somewhat hampered by its desire to keep all members on board where they can be subjected to persuasion, rather than be subject to sanctions or even expulsion.

There have been notable successes of the pressure the Council of Europe can bring to bear. For example, the threat expulsion of Greece (1969) was a decisive step in the building of international condemnation of the military junta which has seized power in 1967.

The PACE writes and publishes reports that make an important contribution to the influencing of political decisions. For example, PACE’s  report on CIA detentions and rendition flights were an acute embarrassment to those countries  who were complicit. Political change in international affairs is a matter of persuasion by the accumulation of evidence especially when that evidence comes from an international body that governments themselves are part of.

In addition, the reports are a great but underused resource for journalists and researchers.

The day I signed off as an MEP in summer 1999, I signed on as a researcher for PACE to write background papers on international politics. It was new and enjoyable to exchange making speeches for doing the research so that others could deliver the speeches instead.