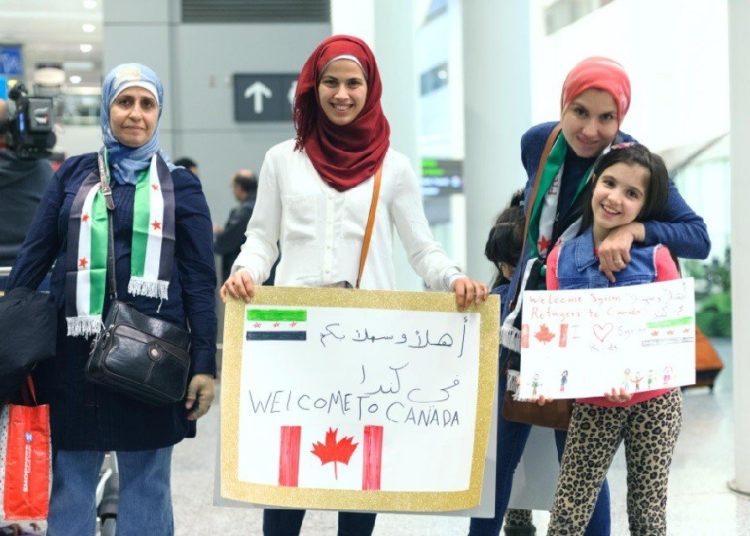 Marya, 8, holds her hand-drawn sign. Along with her family she welcomes the the Syrian refugee flight at Toronto’s Pearson International Airport, 10 December 2015 Image credit: Shutterstock

Weather conditions were ideal for the anticipated arrival. The 10 December 2015 night sky was almost clear. A light but crisp southerly breeze whisked a few passing clouds across a waning moon. However, the atmosphere in the rarely used inland terminal of Toronto’s sprawling Pearson International Airport was another matter. Lost in his own thoughts, perhaps taking in the historical significance of the moment, Canada’s 23rd prime minister, Justin Trudeau, waited alongside representatives of government and private agencies, the media, and politicians from all levels of government.

Minutes from the airport a carpet of lights blanketing the country’s largest city swept under the wings of the Royal Canadian Air Force (RCAF) CC-150 Polaris transport, the Canadian military designation for the civilian wide-body Airbus A310. When the main landing gear touched the threshold of one of Pearson’s parallel runways, it marked the end of a more than 6,000 mile journey from Beirut’s Rafic Hariri International Airport, and the beginning of a new future for 163 sponsored Syrian refugees.

Vanig Garabedian, a 47-year-old Syrian gynaecologist recalled, “People were applauding when the plane landed. There was a feeling that finally we are away from the war. Finally we are safe”.

Operation Provision, the Canadian Armed Forces’ contribution to the government’s initiative to bring tens of thousands of Syrian refugees to Canada in less than three months, had just kicked off. Another airlift from Beirut to Montreal’s Pierre Elliott Trudeau International Airport would happen two days later.

Three months before that inaugural flight, Canada was in the midst of a federal election. In office since 2006, Conservative prime minister Stephen Harper was seeking a fourth mandate. Harper’s campaign focused on two issues: the economy and security. The Syrian civil war and the plight of roughly three million refugees were scarcely mentioned, even though Canadian air and ground forces were active in the American-led coalition against the Islamic State of Iraq and the Levant (ISIL). The conflicts in Syria and Iraq were two continents away. Bread and butter issues seemed more important.

The Harper government’s refugee policy was not very welcoming, adamant that Syrian refugees might pose a security threat. Meanwhile, his ministers pointed to the large number of immigrants that had settled in Canada since 2006. Critics countered that the vast majority were economic immigrants who had jobs waiting or needn’t rely on social assistance. Less than 10 percent were refugees.

The lifeless body of a child washed ashore on a Turkish beach brought the refugee crisis to the forefront.

The heart-breaking images of three-year-old Alan Kurdi flashed around the world. His mother and older brother also perished trying to cross the Aegean Sea from Turkey to Greece. Compounding this tragedy was a report that Alan’s aunt, Tima Kurdi, lived in Vancouver, British Columbia. The family was desperate to reach Europe and seek asylum in Canada. It redefined the election and put Harper on the back foot.

Comparisons were made between Alan Kurdi and a 1972 photograph of nine-year-old Phan Thi Kim Phuc, a Vietnamese girl running along the road, severely burned by napalm from a South Vietnamese aircraft. In 1992, Canada granted Kim Phuc and her husband political asylum.

Delivering on a campaign promise

Canada’s electorate gave Trudeau’s Liberals an overwhelming parliamentary majority. Sworn into office on 4 November 2015 it only took only five days for Trudeau to honour a campaign pledge and welcome 25,000 Syrian refugees. The new PM said the refugees would all arrive by the end of the year, but logically it was too much of a challenge. However, the new target of 29 February 2016 was still daunting.

The Canadian government commenced Operation Syrian Refugees (OSR) in cooperation with the United Nations High Commissioner for Refugees and private sponsors from all provinces and territories. OSR was delivered in five phases:

To call OSR a challenge would have been a gross understatement. There were just 112 days from the time of Trudeau’s announcement to organise and execute, and a mere 81 days from the first flight on 10 December 2015. As a Canadian colleague based in Newfoundland and Labrador dryly observed, “It’s fortunate this February falls in a leap year”.

Canada’s Private Sponsorship of Refugees Program is not a new initiative. It’s been a fixture for more than 40 years. Since 1979, citizens and permanent residents have privately sponsored more than 325,000 refugees. The numbers are staggering.

So, where have these new permanent residents settled? In every province and territory: from Yellowknife, Northwest Territories, to Canada’s southernmost city, Windsor, Ontario, and from Newfoundland and Labrador on the Atlantic Ocean, to the Pacific’s British Columbia.

No camps or internment centres, no applying and waiting for documentation for medical coverage, to find work or for a child to go to school. It’s Canadian and provincial government policy that refugees enter Canada as permanent residents. They are provided with Social Insurance numbers (the Canadian equivalent of National Insurance), health cards (Canada also has universal healthcare), and all the opportunities to become full citizens.

A writer can spin words about the apprehension, the uncertainties and excitement of that first flight of Syrian refugees to an unknown strange land. Many had been driven from their homes, had seen communities bombed, been moved from camp to camp under deplorable inhumane conditions.

Then an opportunity for something better, a flight away from war. To better appreciate the personal and emotional experiences of those who accomplished what seemed to be the impossible, and the refugees on board the inaugural RCAF flight, read their own words. How are some faring today?

On the 10 December night, waiting for the Syrians to exit the RCAF CC-150, Justin Trudeau was accompanied by the federal ministers of immigration, health and defence. He also invited Toronto mayor John Tory, Ontario premier Kathleen Wynn, and all opposition party immigration critics (or shadow ministers, as they are known in the UK) and the national media. The prime minister had beforehand offered his personal thanks to the staff and volunteers helping to welcome and support the 163 refugees.

The first family to be welcomed was Kevork Jamkossian, his wife Georgina Ziresand their 16-month-old daughter, Madeleine.

“You are home”, the prime minister responded. “Welcome to your new home.”