Sue Wilson explains the impact that Brexit is having on Brits abroad and EU citizens living in the UK; the European Affairs Committee met (virtually) to discuss citizens' rights. 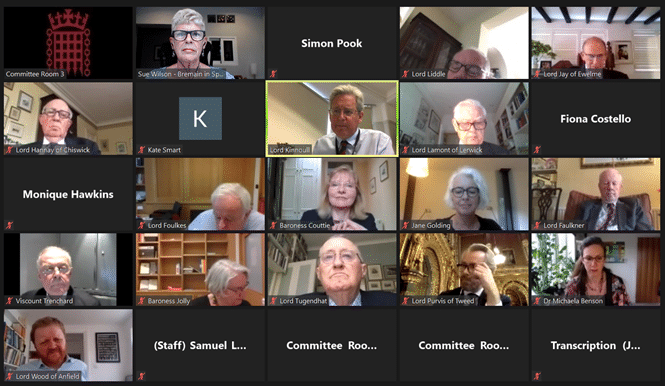 On Tuesday 25 May, the newly formed House of Lords European affairs committee met to discuss citizens’ rights, post-Brexit. With the exception of an evidence gathering session last week with Lord David Frost, the chief Brexit negotiator, this was the first meeting of the new committee. It was therefore encouraging news that the first topic on the committee’s agenda was the rights of EU citizens in the UK and UK citizens in the EU.

Despite being new, the committee members showed considerable knowledge on the subject of Brexit, and its impact on the rights of citizens in both the UK and the EU. Most of the members, including the chair, Lord Kinnoull, were previously members of the now-defunct House of Lords EU select committee, so Brexit is a topic they have been following closely for some time.

Bremain in Spain: testimonies and surveys

Over recent weeks, members of Bremain in Spain’s lobby group had been maintaining their usual contact with many members of the House of Lords. Lisa Ryan Burton, Bremain’s vice chair, had been in regular contact with the committee’s chair, and some of its members, with regard to a report we were compiling on the back of a recent members’ survey.

The survey, put together and analysed by the ‘Brexit Impact on Brits Abroad’ working group (BIBA), took over 600 testimonies from UK nationals in Spain. We asked our members to comment on their Brexit-related concerns, how Brexit had affected their lives, and what still kept them awake at night.

The 27-page report that followed was able to concentrate on topics that were of special interest, including residency, employment, families and health. And we added a topic of our own – the one that was raised the most often by our members – a lack of trust and confidence in the UK government. We submitted our report ahead of the meeting.

I believe it was thanks to those early discussions, before the committee had even met for the first time, that I was invited to give evidence at the meeting on Tuesday.

The committee was keen to understand how citizens’ rights provisions were being implemented across EU member states, and where there were gaps or failings. The committee asked about the true numbers of UK nationals resident in the EU – whether with or without residency documentation – but this remains a question without a definitive answer.

More UK nationals now in Spain than before Brexit

In Spain, the numbers of registered UK nationals now stands at over 380,000 – a 24 percent increase since the Brexit referendum. In 2020 alone, 20,000 more British citizens became legal residents, but the numbers still wishing to do so are, as they have been for some time, difficult to quantity. The accepted wisdom has always been that the true number of Brits living in Spain – whether registered or not – was two or three times the official numbers – perhaps as many as a million in total.

Understandably, the committee was keen to know how many of those people were at risk of falling through the residency cracks. Without knowing how many Britons actually live in Spain, or the wider EU, we can only guess. As five EU countries approach the deadlines for residency applications, this lack of knowledge of the potential scale of the problem is worrying. But no more so than for those trying their best to do what is required, but being failed by the system or by delays created by covid, or the sheer level of demand.

Vulnerable Brits abroad at risk of being labelled ‘undocumented migrants’

The committee asked about vulnerable people, the issues they face and the support that is available. The government-funded UK national support fund (UKNSF) does provide guidance and assistance, but not in all EU countries, and not in all regions. Vulnerable groups include those unable to meet third-country national residency criteria.

Many of these people are elderly, digitally excluded, isolated and without access to health cover. They may have lived in the EU for decades, have no links to the UK, and no desire to return. The EU is, after all, their home. Their status could soon become that of an undocumented migrant, yet we still have no real idea of how many there are. Only that there has been a “sharp increase” in numbers of UK nationals who are deemed not to fall under the Withdrawal Agreement (source: Age in Spain).

“Yesterday’s evidence session was an important step in registering the progress to date of the implementation of citizens’ rights for British citizens in the EU. To my mind, the take-away message is that however successful the implementation is, there will be a proportion of people who fall through the gaps and become undocumented in the process, with serious implications for their lives that may start to come to light later.

“Just as for EU citizens in the UK, the implementation is only the start of this process. Any fallout will likely have a long tail, and we will need to be alert to any fallout for years and decades to come.”

As news of the committee meeting spread, we are already seeing a backlash against Brits in the EU. Whilst not new, taunts of “you all voted for Brexit” from Remainers to “you chose to leave the country, what’s the UK got to do with you?” from Brexiters are certainly unwelcome. And inaccurate.

Brits abroad did not all vote for Brexit. In fact, as far as we can tell for sure, only 25–30 percent of (excuse my French) “expats” that cast a vote in the referendum, voted for Brexit – a far lower percentage than did so in the UK. That’s those that still have the democratic right to vote, that is.

As for the Brexiter taunts, even the UK government (finally) accepts that we have strong connections to the UK, whether that’s through our history, our friends and families, our work, taxes or pensions. We might even come back to the UK to live, in the future – whether we want to or not.

I’m one of the lucky ones. I’m retired, so have no Brexit-related concerns about future employment. I’m financially secure, so can manage any small wobbles in the exchange rate. I have my healthcare funded for life, and my residency signed, sealed and delivered, so no residency or healthcare fears. Unlike so many others.

But like the majority of our survey respondents, I also don’t trust my own government to honour their promises or be straight with me. Let’s hope that, as well as organisations like Bremain in Spain, British in Europe and Brexit Brits Abroad, the European affairs committee will also keep a watchful eye on our government and our rights.