The EU has made it clear that it does not accept the argument that the aim of the draft UKIM bill is to protect the Good Friday (Belfast) agreement. In fact, the EU claims it does just the opposite. 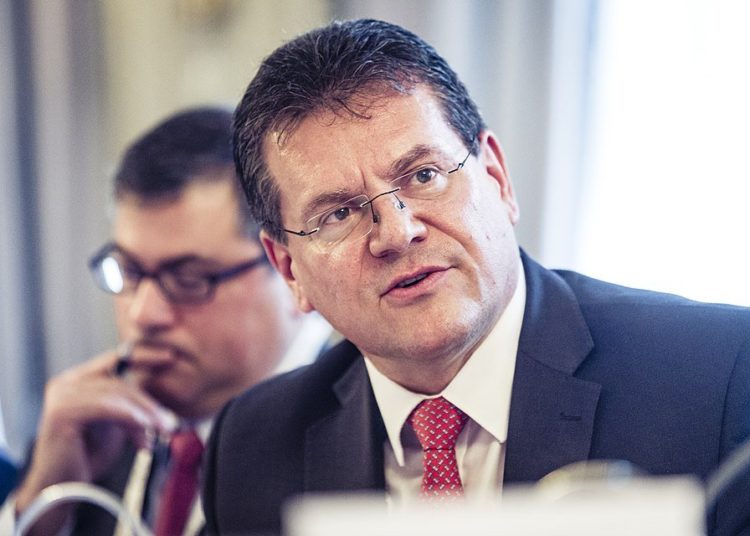 Following hard on the heels of the government’s announcement on Tuesday that it intends to break international law by allowing the UK internal market bill (UKIM) to supersede parts of the withdrawal agreement, EU Vice President Maroš Šefčovič flew to London earlier today. In a meeting with Michael Gove, he read him the diplomatic equivalent of the Riot Act.

A strongly worded statement appeared soon afterwards on the EU website, which included this:

The Vice-President stated, in no uncertain terms, that the timely and full implementation of the Withdrawal Agreement, including the Protocol on Ireland / Northern Ireland – which Prime Minister Boris Johnson and his government agreed to, and which the UK Houses of Parliament ratified, less than a year ago – is a legal obligation. The European Union expects the letter and spirit of this Agreement to be fully respected. Violating the terms of the Withdrawal Agreement would break international law, undermine trust and put at risk the ongoing future relationship negotiations.

The EU has made it clear that it does not accept the argument that the aim of the draft UKIM bill is to protect the Good Friday (Belfast) agreement. In fact, the EU claims it does just the opposite.

Šefčovič called on the UK government to withdraw the measures that seek to override the withdrawal agreement from the draft bill “in the shortest time possible and in any case by the end of the month”.

It sounds rather like an ultimatum and the VP added that by putting forward the bill, the UK has “seriously damaged trust between the EU and the UK”. He put the onus firmly on the UK government to re-establish that trust.

He reminded the UK government that the withdrawal agreement contains a number of mechanisms and legal remedies to address violations of the legal obligations contained in the text – which the European Union “will not be shy in using.”

Reuters claims that the UK government is still intending to press on and has published the attorney general’s legal opinion, which says Britain is acting within its rights to pass such a law because parliament is sovereign. But Mark Elliot, a professor of public law and chair of the faculty of law at the University of Cambridge, has described Suella Braverman’s statement as “utterly risible”.

The future relationship talks ended today with no progress and a gloomy statement from Michel Barnier:

The stage is now set for a showdown and potentially for a breakdown of trade talks by the end of the month.