There were no surprises in yesterday’s presidential election in Belarus with the ‘resounding victory’ of the incumbent, Aleksandr Lukashenko, who has been elected for the sixth time to the office of president of the former Soviet republic. 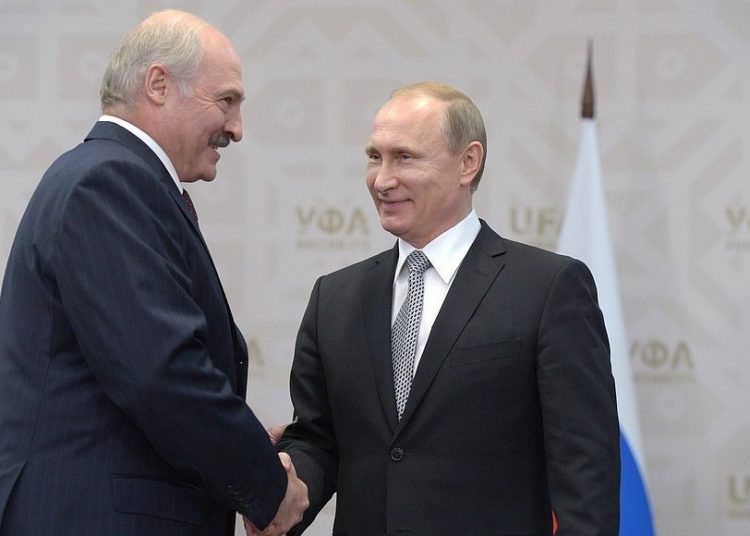 There were no surprises in yesterday’s presidential election in Belarus with the ‘resounding victory’ of the incumbent, Aleksandr Lukashenko, who has been elected for the sixth time to the office of president of the former Soviet republic. While none of his previous victories could have been described as ‘free and fair’ by western standards, this time the degree of fraud and intimidation has exceeded all bounds.

With the main opposition figures in prison or forced into exile in fear of their lives, the principal alternative candidate to ‘Europe’s last dictator’ was 37-year-old former-teacher Svetlana Tikhanovskaya, wife of the dissident, YouTube-blogger and pro-democracy activist, Sergei Tikhanovsky. He has been held on trumped-up charges of ‘organising a grave breach of public order’ since the end of May. Surprisingly, his wife’s candidacy was accepted as valid by the State Electoral Commission, probably because the regime felt the 7 million voters would be unlikely to choose a woman as president.

In his campaign, Lukashenko frequently made disparaging remarks about women as politicians, suggesting ‘the poor things’ were not up to the task and certainly completely unsuitable for the role of president. The fact that neighbouring Lithuania enjoyed increasing influence in the EU and on the world stage with Dalia Grybauskaite as president between 2009 and 2019 seemed to have escaped him. Tikhanovskaya’s campaign went from strength to strength, and she attracted crowds sometimes larger than 50,000, despite the government snatch-squads, which in broad daylight forcibly removed some of her supporters to loud and co-ordinated cries of ‘shame on you’ from those remaining.

When polls closed last night at 8pm, the official newspaper of the presidential administration began quoting an exit poll which claimed that Lukashenko had won with 79.7 percent of the vote, while Tikhanovskaya was runner-up with a mere 6.8 percent. Opposition media were at the same time warning the public that police vehicles of various kinds were being stationed in public places where protesters, angry at the apparent ‘landslide’ for the man dubbed ‘Sasha 3%’ during the campaign, might gather.

Belarussian voters are simply fed-up with more of the same from their leader, who has failed to boost the economy and has consistently denied the seriousness of Covid-19, advocating saunas and vodka as a cure and failing to provide medical services with adequate PPE. Such has been the crisis in the health service that medics have been forced to seek crowd-funding to provide basics.

Tikhanovskaya repeatedly warned her supporters to guard against provocation, assuring them that legal challenges would follow if there were irregularities of any kind in the electoral process. Nevertheless, angry crowds soon began gathering in the centre of Minsk and other cities. By midnight in the capital, barricades were being constructed from dustbins. Riot squads responded with rubber bullets, water cannon, teargas and stun-grenades.

Shortly after midnight, Tikhanovskaya announced that people had finally overcome their fear, but there was still much to be done. “I consider that we have already won because we have conquered our fear, political indifference and apathy. These were the most important victories of all.” By half past midnight, shots were being fired on the streets and a large police van rammed a crowd of protestors. By 1am, riot squads had succeeded in splitting the crowd into small groups and dispersing them.

As protesters were being dragged away, Tikhanaovskaya reminded police and soldiers that they also were part of the people and called on her supporters not to give cause for the authorities to use violence against them. “I know that Belarussians tomorrow will already wake up in a new country.” Protests quickly spread to other parts of the country where the reaction of the security forces varied. Shortly before 2am, for example, in the town of Kobryn near Brest, protesters cheered and applauded security forces who were refusing to carry out orders. Around the same time, the sound of approaching helicopters could be heard in the centre of Minsk. At Tikhanovskaya’s HQ, they began to barricade themselves in, fearing imminent arrest.

The morning after the election, with the official result now announced, Lukashenko has 80.23 percent of the vote and Tikhanovskaya 9.9 percent. But Tikhanovskaya believes the figures are the other way round and has restated her intention to dispute not only the result, but the entire electoral process in the courts. On Twitter photographic and video evidence is emerging that appears to support this belief:

Meanwhile, President Putin of Russia has congratulated Lukashenko on his victory, while the Polish PM, Mateusz Morawiecki, has called for a special EU summit to discuss the tricky political situation on the EU’s border, which is simply not going to go away. With one person already killed by riot police, tensions are set to continue in the hot August nights.