Trevor Fisher investigates the international spread of conspiracies during the pandemic which may hinder us getting out of it. 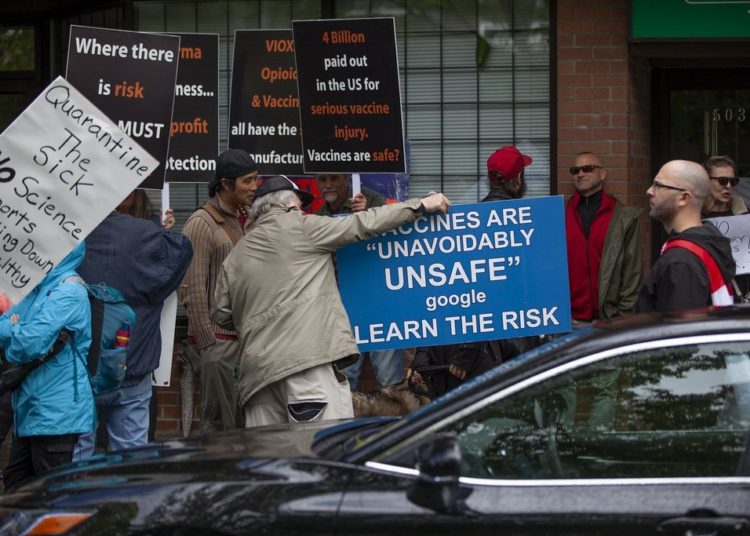 Image by GoToVan for Creative Commons

The coronavirus pandemic has brought out conspiracy theorists, opposing lockdown measures and facemasks. But some have more sinister politics.

Conspiracy theories and ‘alternative facts’ are the stock in trade of fascist groups. And myths around and generated by Hitler’s Nazis have never gone away, as Richard Evans argues in a new book, The Hitler Conspiracies.

In recent years however, a new wave of conspiracies and allegations of plots by shadowy but powerful elites have developed. The fascist and far-right populist surge that we now see in many countries in Europe and elsewhere is fuelled by these developments, many of which do not appear fascist at first sight.

Over the summer, the coronavirus disaster brought many of these conspiracy theories into the open. A raft of cults emerged, united by the belief that there was no pandemic – merely a hoax invented by powerful elites to develop a surveillance state or, alternatively, a mild outbreak of something like flu, developed by those elites to put us under control.

Demonstrations against lockdown restrictions emerged in many parts of the US, supporting Donald Trump’s presidential election campaign, as well as in Australian cities and in Europe.

Rome, Berlin and London have all seen such protests.

Within the overall belief that the pandemic is a hoax there have been several major strands. The one that has had most publicity is a well-developed anti-vaccination theory, holding that vaccination is a way to infect and control people. Advocates of this conspiracy theory have attracted media attention because of the implications for attempts to develop and administer a vaccine against Covid-19.

In Berlin, one of these demos featured broad political alliances. It was large – with an estimated 20,000 to 40,000 attending – and gave oxygen to openly fascist groups who afterwards attacked the Reichstag parliament building, an ultra-right target since the days of Hitler.

One prominent speaker was Robert F Kennedy, nephew of the assassinated US president John F Kennedy. He reportedly laid into 5G phone networks – the subject of another widespread conspiracy theory – and warned against the supposed building of a surveillance state by the shadowy elite. He also complimented Berlin for being on the frontline against totalitarianism.

The major threat in Britain, however, is the anti-mask movement. Demonstrators pointedly do not wear facemasks. Those at a series of substantial demos in London’s Trafalgar Square have made no attempt at social distancing – the numbers alone would make this difficult – forcing police to clear the square. Subsequent violence left demonstrators and police officers needing treatment.

In Stafford, in the West Midlands, graffiti around the town mocks a slogan of the Black Lives Matter movement, saying, “We can’t breathe, say no to masks”.

While social media is the main channel through which the cults organise and disseminate their views, there is at least one sophisticated free paper – The Light, a 16-page tabloid – going beyond anti-masks and vaccination publicity. The September 2020 issue included claims of shadowy paedophile elites, that the government uses behaviour modification techniques – brainwashing, in effect – and that the medical profession colludes in the elite’s machinations. The November edition had a two page spread highlighting Robert F Kennedy and attacking the 5G phone network.

These are indeed bare-faced extremists and their refusal to wear facemasks is a visible sign of rejecting mainstream advice in favour of conspiracy theories. The rapid spread of these theories and the way they boost actual fascist activities make the “Scamdemic” movement a dangerous threat.

Trevor is a Labour Party member, veteran campaigner. He is co-author of the book 'Warwick University Ltd' and student of the editor, E P Thompson. Trevor is active in the anti-fascist group NORSCARF in North Staffordshire and in various organisations that oppose Brexit in the West Midlands. Formerly a teacher, he is now retired and an author of historical books on nineteenth century and Tudor history.