A tale of two countries: a comparison of Trump and Johnson’s pandemic policies

ADVERTISEMENTTwo political power heads, one ideology – both politicians possess a naïve and passive understanding of Covid-19, while testing and PPE issues have plagued both countries. Luckily, many state governors, as well as the first ministers of Scotland, Wales, and Northern Ireland, have had more freedom to enact their own policies that contradict their top […] 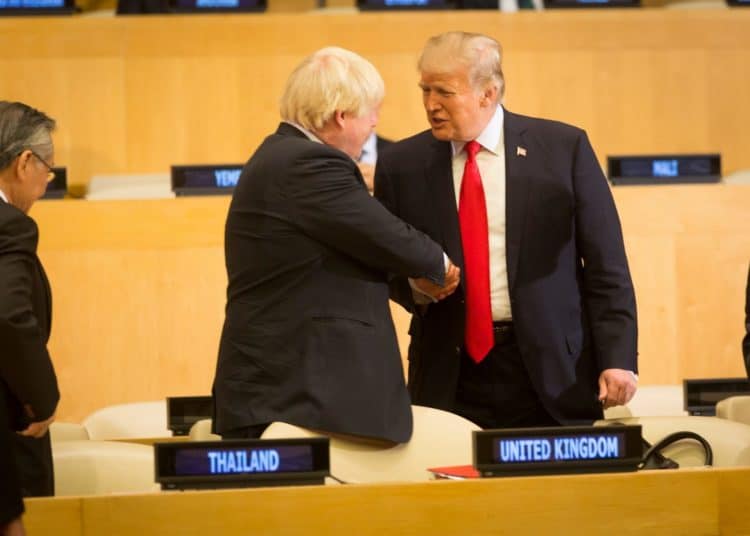 Image by the White House is marked by CC PDM 1.0

Two political power heads, one ideology – both politicians possess a naïve and passive understanding of Covid-19, while testing and PPE issues have plagued both countries. Luckily, many state governors, as well as the first ministers of Scotland, Wales, and Northern Ireland, have had more freedom to enact their own policies that contradict their top officials’ recommendations.

One cannot analyse these two leaders without recognising their strikingly similar backgrounds. Both Donald Trump and Boris Johnson have had privileged upbringings and were able to attend prestigious academic institutions. Their tumultuous relationships with women have been noted in multiple tabloids throughout the years. Trump is currently on his third marriage, with a history of apparent extra-marital affairs and sexual assault allegations. Similarly, Johnson is now planning his third marriage and has just had his sixth child with his fiancé, while more and more sexist and racist statements come to light. But Johnson and Trump’s rocky relationships with women are not the only relationships they have jeopardised as they both face criticism over their current coronavirus policies from citizens.

Currently, the prime minister of the UK is facing a backlash for tightening Covid-19 restrictions to groups of six and raising the alert level to four. Some believe Johnson’s policies to be too little too late and the faster a lockdown is put in place, the better. Experts like David King, chair of the independent scientific advisory group for emergencies, have claimed that Johnson’s early inaction is responsible for the spread of the virus. The allegation is that Johnson deliberately ignored public health reports so as to sustain the British economy. Unsurprisingly, the UK is seeing a spike in cases and the R-rate for transmission is now 1.2–1.5 (anything above 1 is worrying as it means infection numbers are climbing). Yorkshire’s R-rate is estimated to be 1.7as parts of the county are entering into local lockdowns.

The US presidential election is merely a month away and the pandemic has taken a backseat to Trump’s last-minute campaign efforts. In an attempt to prove his control over the coronavirus, President Trump claimed a vaccine would be approved before the 3 November election day and that the White House could overrule the US Food and Drug Association’s (FDA’s) necessary authorisation of the vaccine. These statements come after claims the FDA will impose new rules to check the safety of the coronavirus vaccine.

Trump’s downplaying and politicising of the pandemic is not news though, as he recently called the 200,000 American deaths to the virus a “shame” while still hosting campaign rallies. These rallies are often in defiance of state restrictions on crowd sizes and mask mandates. Trump addressed the nation on 11 March stating, “[For] the vast majority of Americans, the risk is very, very low”, though we now understand he had received intelligence to the effect that the opposite was true and the risk was very high. Bob Woodward’s latest book, RAGE, gained understandable attention recently as it highlights an interview with Trump on 19 March where he states, “I wanted to always play it down. I still like playing it down, because I don’t want to create a panic.” The United States now leads the world in coronavirus cases at 7.2 million total cases.

However, some lesser-known political figureheads have been able to prove why they were chosen to lead. The governor of Ohio, Mike DeWine, an unremarkable career Republican in a sleepy state, gained over-night attention for his early foresight in shutting schools, pushing for universal absentee voting, and implementing a state-wide mask mandate. “Mike DeWine’s performance contrasted with Trump’s performance shows you what character and experience mean”, said Sherrod Brown, Ohio’s senior senator and a Democrat, who continued, “The mini-Trump governors in Georgia, Texas and Florida, they’re going to do whatever Trump wants. But DeWine’s not going to do that. He cares about his legacy. He cares about the next generation”.

Similarly, Scotland’s first minister Nicola Sturgeon, Northern Ireland’s Arlene Foster, and Wales’ Mark Drakeford established that they would do what was best for their citizens rather than simply siding with Westminster. Each country imposed strict border lockdowns in the early stages of the pandemic. These leaders also defied Westminster by sticking with the “Stay home, protect the NHS, save lives” until late June instead of following Britain’s relaxed slogan “Stay Alert”.

In recent days, the UK has seen new restrictions to social gatherings. Residents in Leeds, Wigan, Stockport and Blackpool are now banned from mixing with other households and there are warnings that another full lockdown may be coming in October. New mask mandates are also being implemented to include retail and hospitality staff. But some still oppose the use of masks despite the UK and US’s government guidelines, with certain right-leaning individuals seeing masks as a breach to their “freedom”. Even the mostly in-person Republic National Convention held in the White House’s rose garden saw crowds of GOP members sitting close together without face coverings.

So, what is it about a face mask that symbolises the collapse of democracy to UK and US conservatives?

Psychologist Dr Seth Gillihan claims that masks are seen to symbolise a political loyalty: to not wear them means you side with the politicians who are playing the disease down and who are focusing more on the strength of the economy. To wear a mask symbolises your liberal beliefs and concern for spreading the disease to others. His advice to all is to, “Wear it with pride as you hold onto your liberties.” An August MIT study found that if the US had implemented a national, mandatory mask mandate for employees and patrons of public-facing businesses on 1 April, the death rate would likely have been 40 percent lower by 1 June.

While some political leaders may be favouring inaction over action on policies, we are each able to take individual measures to stop the spread. The US’s case numbers are still comparable to those back in late April and new mandates are being left to local leaders just as the UK is witnessing similar local breakouts as we head into the colder months. The more we learn about this virus, the more signs point to the effective use of masks. Johnson’s newest policies on masks are a step in the right direction but time will tell if they were “too little, too late”.

It is hard to decipher what the future holds for our two nations but with a fiery US presidential election less than five weeks away and greater opposition building to Johnson’s leadership, at least we’ll have something to watch if we’re all back in quarantine.