Kerry Pearson writes about the Pinochet-era dictatorship in Chile and how protests have helped bring it down. 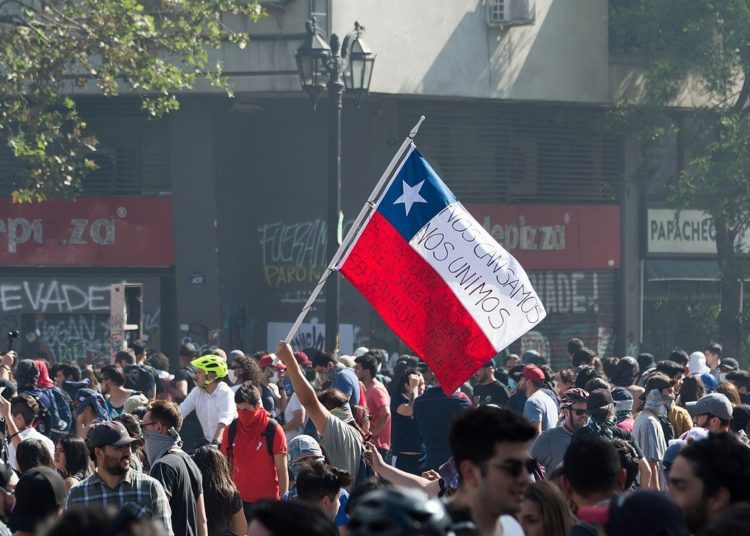 One of the last legacies of the period of military dictatorship in Chile is about to disappear. Last week, in a landslide referendum victory, 78 percent of Chileans voted to rewrite the Pinochet-era constitution.

Protests in Chile against the dictatorship

This comes a year after the outbreak of mass protests, sparked off by demonstrations in Santiago against rising public transport fares. More than 30 people died and many more were seriously injured as a result of what Amnesty International described as “unnecessary and excessive force” on the part of security officers, as, across the country, tens of thousands of Chileans came out to protest against years of hardship and inequality, determined to overturn what they saw as the country’s illegitimate constitution.

The referendum, agreed to by President Piñera in response to the protests, represents the first time in the South American nation’s history that they have been able to voice their opinion through a vote on whether or not they approve of their constitution – and Chileans have overwhelmingly voted against the restrictive, dictatorship-era charter.

What was the problem with Pinochet’s legislation?

The constitution was widely regarded as having no legitimacy, as it was crafted under the military dictatorship of American-backed Augusto Pinochet, and controversially approved by voters in 1980 in a fraudulently conducted plebiscite. It enshrined the anti-democratic, authoritarian principles of the regime, and a neoliberal approach to the economy that ensured low taxes for the wealthy, private sector control of public services, and minimal state intervention, leading to widespread inequality and poverty.

Political power was concentrated on the right, tightly controlled by Pinochet, and underpinned by the creation of the secret police, the DINA, or ‘Pinochet’s Gestapo’ in 1974. Although the constitution initially acknowledged human rights, the DINA had the power to detain any individual so long as there was a declared state of emergency; unsurprisingly, Pinochet deemed Chile to be in such a state until the final days of his rule.

After becoming a democracy in 1990, Chile attracted heavy foreign investment and poverty rates eased, but the gap between rich and poor grew wider. In the words of Margaret Atwood, “better never means better for everyone”. Changes have been made to the original constitution but Chileans have continued to suffer from ‘two-tier health care’ that benefits the wealthy, and from poor quality state schools.

In 2019, the United Nations Economic Commission for Latin America concluded that nearly a quarter of total income goes to 1 percent of Chile’s population. Hence, critics of the constitution (seemingly 78 percent of Chile) regard the charter as not only ‘neoliberal’ but ‘hyperpresidential’ too, meaning that the president can force policies into congress and thus into law.

What is the significance of this referendum result?

The overwhelming approval of the need for a modernised constitution in the referendum is a very significant victory for its advocates. On the further question as to how the new constitution should be written, 79 percent opted for a “Constitutional Convention”, all members of which will be democratically elected in 2021. Furthermore, half of the seats on the Convention will be allocated to women, meaning it will be the world’s first constitution to be created under gender parity.

Once there is a draft of the new constitution, another referendum will be held to see if Chileans agree with the legislation. Protesters will be hopeful for major political and economic changes and the assembly is also likely to acknowledge indigenous Chileans (9 percent of the population) who have hitherto been brushed aside. The president will doubtless lose some of his or her power, and there may be an adoption of a parliamentary system. Chileans hope a new constitution will render their country a more socially democratic one, with better, more affordable public services for everyone. And of course, human rights will be the sine qua non of the new constitution.

While opponents have argued that change endangers the basis of Chile’s economic success, it is hoped that a new constitution will now unite people. In a formal address, President Sebastián Piñera said, “Until now, the Constitution has divided us … As of today, we should all cooperate to make the new Constitution become one home for all of us”.

Ultimately, it was a banner carried in the huge crowd celebrating the result that summed up the significance of this referendum to Chilean people. Addressing itself to Pinochet, it proclaimed, “Erasing your legacy will be our legacy”.