ADVERTISEMENTBringing our buses into public control has been a key issue in the race to elect West Yorkshire’s first mayor, with coverage in the BBC election debate and many identifying it as a top priority. That’s thanks to local people who have made the case for change. Buses will be key to building back better […] 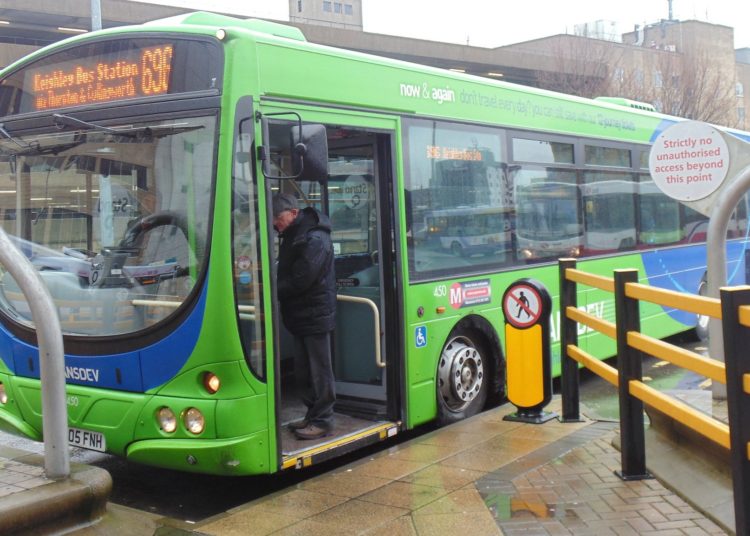 “bradford bus station feb 2014” by calumsphotos is licensed under CC BY 2.0

Bringing our buses into public control has been a key issue in the race to elect West Yorkshire’s first mayor, with coverage in the BBC election debate and many identifying it as a top priority. That’s thanks to local people who have made the case for change.

Buses will be key to building back better

We are living through difficult times. Covid-19 has exacerbated many of the challenges facing West Yorkshire, not least the issue of child poverty, the epidemic of loneliness and isolation, and the decline of our highstreets. In the background is the threat of climate change, with the potential to destabilise our lives further.

Improving the region’s buses could offer us a powerful tool to deal with these issues.

Transport costs are the biggest burden on most households – making our buses affordable could therefore help lift local people out of poverty. Publicly controlled buses also have a key role to play in helping local businesses recover – the Wakefield FreeCityBus, paid for by local government, has boosted spending in the town centre. And improving bus services is essential to helping people find employment, with 1 in 5 workers turning down a job due to poor quality bus services.

Reliable and accessible buses would make it much easier for the most isolated in our communities to visit family and friends, community events or even a hospital. And with 40 percent of local emissions coming from transport, reducing the number of cars on our roads will be key to tackling climate change.

Only public control can deliver the improvements we need

But we cannot achieve any of this with business as usual. Since 1986, our bus network has been run by and for private companies. They are free to set their own routes, fares and standards regardless of the costs to our communities.

As a result, passenger journeys in West Yorkshire have crashed to 40 percent of the level before deregulation. That’s even worse than in Manchester. Ticketing has become confusing and complicated, with over 100 different fares offered on just one transport corridor in Leeds. We have also lost many evening, weekend and rural services, as private companies cherry-pick only the most profitable routes. In 2019 alone, 54 local bus routes in our region were lost or reduced.

We all know that buses should be run as a co-ordinated public service for the benefit of its drivers and users. That’s why the Better Buses for West Yorkshire campaign is pushing for London-style public control to be brought in by West Yorkshire’s mayor. This would allow us to introduce simple, integrated ticketing that works, not just across all bus operators, but across trains too.

Only public control can offer this. It would also enable us to expand the network, with the mayor using fares from the most profitable routes to cross-subsidise evening, weekend and rural services. Finally, we would be able to introduce affordable ticketing – like London’s £1.50 hopper fare – so that everyone can get around cheaply.

Just a few weeks ago, Andy Burnham announced that Greater Manchester will use its powers to bring buses back into public control. We know that it will take time to reach that stage here in West Yorkshire. The first step towards winning that big improvement for our region would be for our new mayor to announce the first stage of the activation process for those public control powers, a so-called ‘statutory investigation’.

This investigation would recognise that there is a problem and that our buses need to change. It then would look at whether leaving the network in private control, or regulating it under the mayor’s office, would be the best solution for West Yorkshire’s communities.

The mayoral candidates entered the election race with a range of views about whether or not to bring our buses into public control. Lots of them may have just wanted to wait and see.

Last Thursday, we challenged them all to go further than they had so far. We asked them to pledge to start that investigation into public control in their first 100 days. The government has asked for a decision on whether West Yorkshire intends to pursue franchising by the end of June. So the clock is already ticking.

But the government’s deadline is not the only reason to move quickly on public control. Local bus users need that announcement as soon as possible. They know the transformative power of a well-run network and the challenges we face when buses are run solely for private gain.

That’s why our public meeting heard from six local bus users about their experiences on the region’s buses. They told us about the devastation that deregulation and cuts cause to rural communities. They described how poor bus services can cut people off from their family and friends. They moved us with stories of the difficulties involved in getting a large family about on the region’s expensive buses.

With the exception of the Conservative candidate, every politician at our recent public meeting gave a clear commitment to start the investigation into public control in their first 100 days. This was a massive win for the campaign and for the people of West Yorkshire.

However, the fight for better buses doesn’t stop there. While public control is popular in the region, indeed roughly 86 percent of those who have an opinion on public control are in favour of it, we cannot rely on local politicians to make good on their promises.

That is why after the election, the Better Buses for West Yorkshire coalition will continue to put pressure on the new mayor, and our council leaders, to announce the investigation before July. Sign our petition here – for more information, visit We Own It and join us.

Matthew is based in Ilkley and works as a campaigner with the Better Buses for West Yorkshire coalition. Alongside environmentalists, trade unionists, and local pensioners associations, Matthew organises to bring the region's buses into public control, so they work for people, not profit. Please contact him on matthew@betterbuseswestyorkshire.org.uk if you would like to get involved.