Matthew Topham writes about South Yorkshire's buses; from when Thatcher privatised transport, to now, when enhanced partnerships are a possibility. Regional mayors like Andy Burnham also have a huge influence over transport policy. 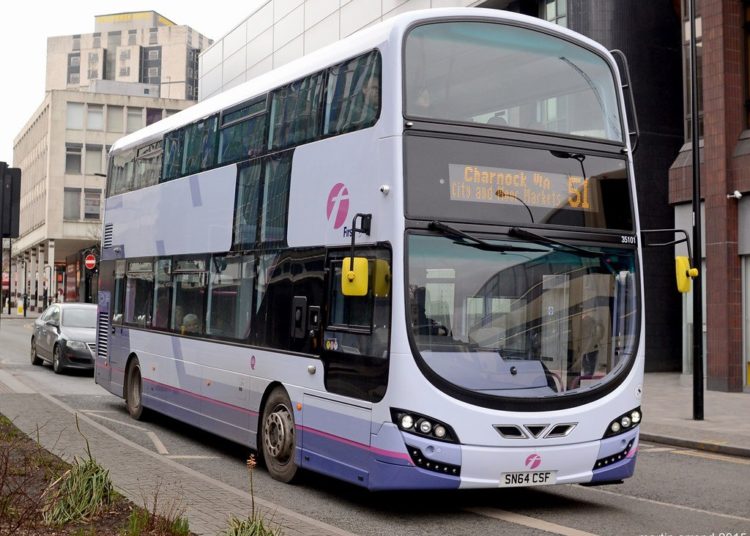 In the 1980s, South Yorkshire’s buses were the envy of the world. An eight-year fare freeze meant that the region was rapidly approaching the point where it would cost more to collect the fares than to charge them. Free bus travel for all was just around the corner.

Thatcher’s Transport Act and privatisation of the bus networks

But then came Thatcher’s 1984 Transport Act. This legislation deregulated the bus network, allowing private companies to set their own fares, routes, and standards. Almost overnight prices went up 300 percent.

Over the following 40 years, deregulation has decimated our transport networks, leaving communities all over South Yorkshire isolated, facing exploitative fares, and a skeletal service. All this because buses are run, not as a green, public service, but in the interests of private companies.

Take the experience of Doreen, 69, who spoke to the Yorkshire Pensioners Convention before the pandemic about her experience on our buses: “I regularly need to go into Barnsley at 9 o’clock for a meeting. The single fare costs me £3.40 for a five-mile journey.”

The power of regional authorities over bus routes

As a Mayoral Combined Authority, the Sheffield City Region has the power to change all that, once again becoming a world leader in bus transport. Look at Andy Burnham in Greater Manchester. He has shown that regional mayors have the power to bring buses back into public control, ending the Wild West free market that has been failing local people for decades.

However, the leaders of Sheffield City Region do not seem interested in repeating the success of their friends across the Pennines. At their annual general meeting on Monday, the Combined Authority leaders look set to prop up our failing deregulated system, using an ‘enhanced partnership scheme’, with no firm commitments to deliver the radical improvements the region sorely needs.

But here’s the catch – partnerships are just more of the same and any changes they promise will be cosmetic. Partnerships rely on local authorities investing public money in infrastructure like bus lanes, bumping up operator profits in the process, in return for minor improvements from private companies.

Those operators still control the network, leaving the mayor without power to regulate their fares, employment or environmental standards, or even what routes they run.

So why is Dan Jarvis settling for just an enhanced partnership? One reason is the advice given by the Sheffield City Region officers. This suggests that the region must commit to a partnership before the end of June, or risk losing access to the government’s essential bus support funding. That’s why they are recommending the Combined Authority votes to form a partnership at their meeting on Monday.

But the government’s rules are much more pliable than this suggests. For instance, Mayoral Combined Authorities can choose to investigate just public control, without risking access to funding as long as they are “actively following the franchising assessment process”. There is no need to have a partnership at all!

Many councillors argue that we need to pass through a partnership deal to make a better case for franchising, but we already know partnerships cannot deliver the dramatic change South Yorkshire needs.

Partnerships will leave private companies in the driving seat

For one thing, almost any part of the deal can be blocked by a “bus operator running 25 percent of regular service miles”. In a region with fewer than four major operators, that means the balance of power lies significantly with the private companies, not our elected representatives.

And then we come to the possible benefits a partnership might deliver. Compare these to public control and there is no competition. While fares can be made cheaper for some groups under partnerships (such as apprentices), only public control allows the mayor to reduce all fares. Again, it is London’s system of public control that allows its truly integrated ticketing system, without the need for single operator fares. That is something partnerships could never legally deliver.

What about restoring the evening, weekend, and rural services that have been axed by private companies? Under public control, the mayor can use cross-subsidy from the profitable commuter routes to fund essential services, like those linking our towns to hospitals.

Why wait for the economic benefits of public control?

As for the economic case, it’s worth noting that in Greater Manchester the economic benefit of the proposed franchising scheme (£234m), the technical name for public control, was nearly three times the size of the operator proposed partnership (£80m). There is no reason to expect a different trend in South Yorkshire.

Despite the overwhelming evidence that public control will deliver the bus services that South Yorkshire needs, the region’s politicians are likely to resist calls to go straight for public control. A compromise position is for the Sheffield City Region’s leaders to start looking into franchising right now while delivering a partnership in the meantime. At least that way local people would know that public control is coming, even if we must wait longer than our friends in other City Regions.

All that is needed to start the official process of establishing either public control or a partnership is for Dan Jarvis to release a statutory notice of intent. So, the message to our region’s leaders is this: show your ambition for our communities and vote to release both notices on Monday. That is how we can deliver better buses for South Yorkshire.

Matthew is based in Ilkley and works as a campaigner with the Better Buses for West Yorkshire coalition. Alongside environmentalists, trade unionists, and local pensioners associations, Matthew organises to bring the region's buses into public control, so they work for people, not profit. Please contact him on matthew@betterbuseswestyorkshire.org.uk if you would like to get involved.