The government’s new plan for immigration: the hostile environment is becoming more hostile

Dr Stella Perrott reviews the latest plans by the government to reform immigration: once again they ignore the actual failings of our immigration system and focus instead on a false narrative perpetrated by the Home Office. 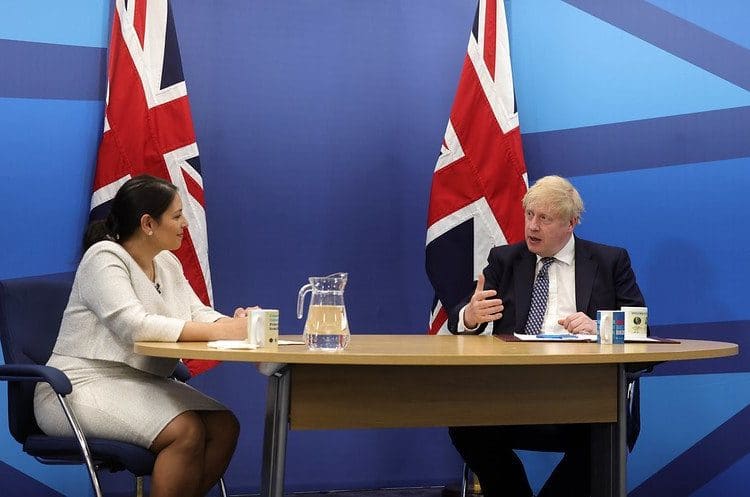 Boris Johnson Political Tour day across the UK by The Conservative Party is licensed under CC BY 2.0

The government’s plan for immigration is based on a working philosophy of punishment and deterrence. It signals pernicious and costly changes that will do nothing to address the problems of the immigration system.

The plan was issued on 24 March with a return date of 5 May, leaving just six weeks (instead of the customary 12) for people to respond. The government states that it intends to make immigration fairer, deter illegal entry into the UK and remove those without leave to remain more easily.

The points-based immigration system that came into force from 1 January deals with mainstream immigration. This new plan is primarily concerned with ‘irregular’ migration and people residing in the UK who cannot prove their right to be here.

A litany of problems with the immigration system

The problems with the asylum and immigration system are well documented

The plan includes a commitment to (but no plan for) re-establishing safe routes for refugees, and some tinkering around the edges of the system that may help streamline some procedures and enable quicker decision making. Mostly however, the plan is a summary of new measures (or reiteration of old measures) to try and prevent asylum seekers reaching UK shores and to deport them more quickly.

Making an even more hostile environment

In this plan, the government proposes (but has already put into effect) that applications made by refuges who have come through a third ‘safe’ country will not be considered until efforts to return them to that country have failed. This adds additional layers to the asylum process and further delays and costs. By necessity, it will require more lawyers to help asylum seekers navigate the process, and more administrative time to manage this additional layer. EU countries have already stated they will not accept returnees.

The plan also proposes to deport illegal immigrants more quickly by denying appeal applications. At present, a high number of asylum seekers win their cases on appeal, showing that Home Office initial decisions have been made in error or were unlawful, or outside the law.

The Home Office also fails in many deportation cases because, although denial of asylum was lawful, the decision did not take account of the persecution the person might experience as a returnee, or the ties and family relationships they’d already built in the UK.

Similarly, Home Office decisions to deport people who have committed fairly minor offences have been overturned on appeal due to the potential impact on the offender or their family’s right to family life, given the length of time the person has resided in the UK.

Deporting undocumented immigrants is complex and few are deported. Without documentation, it is difficult to identify which country they should be returned to, and some may even be stateless. Their country may still be at war, or there may be no infrastructure to enable a return. Those who’ve been in the UK a long time and who have British families will try and remain here and it’s likely that any attempts to deport them will be subject to appeals and legal challenges.

Attempting to increase the level of deportations is an ineffective but immensely cruel immigration strategy. Windrush victims were not deported because they were in the UK illegally, but because they lacked the documentation to prove their status. The government plans to extend these punitive measures to EU citizens after June, including children born in the UK, and is already deporting EU citizens who are homeless.

Misinformation from the Home Office

I have written previously about Home Office lies and misinformation. The consultation document is riddled with them, for example:

There is nothing positive in these proposals – no new schemes to offer more refugees asylum. No proposals to regularise the immigration status of people who have been in the UK for years or children who were born here. No proposals to improve access to good legal advice that would speed up the decision making process and no proposals to build a more humane system.

The document presupposes that the government’s views of the system’s problems are universally shared and that its goals are the correct ones. It seeks only views on how effective the measures might be at meeting the goals. It has ignored the research findings on the ‘push’ and ‘pull’ factors that lead to people refugees trying to enter the UK and so it will fail.

There has been no consultation with refugees or immigrants. The online response form is clunky to navigate. It requires a high level of English to understand and is not available in other languages. The Conservative government has been silencing refugee voices, and Conservative MPs have been campaigning for Priti Patel to ignore the views of those who might represent them.

The government’s stated intention is that these new cruelties will act as a deterrent to would-be immigrants and those who might assist or traffic them. Yet it will have no impact on arrivals, it will merely increase the number of people who cannot be deported – people who cannot work, have no access to public funds and cannot seek health care or accommodation. Inevitably, many of these migrants will be exploited in the shadow economy or will resort to crime.

The proposals are vindictive. They fail to address the problems of the immigration system and will increase delay, costs, and bureaucracy.

The closing date for responses is tomorrow – 5 May. A number of refugee groups are campaigning against the proposals and you can join the campaign here.