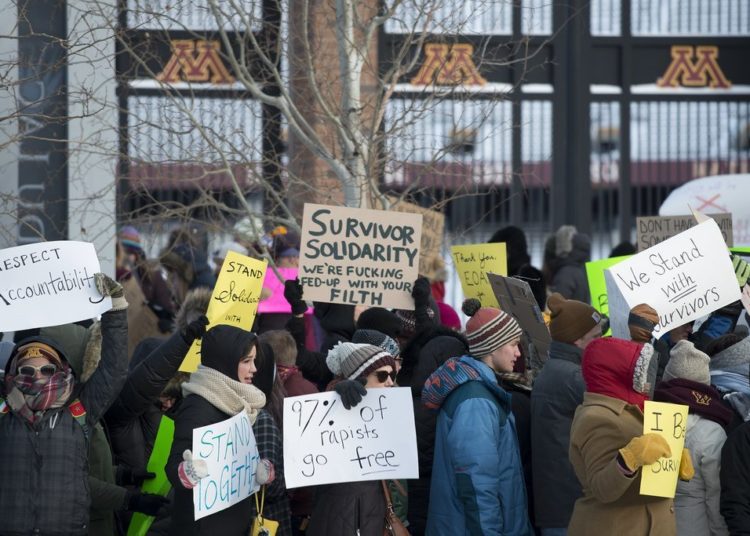 A new report, ‘The Decriminalisation of Rape: Why the justice system is failing rape survivors and what needs to change’, published on the 30 November 2020, sets out the reasons why the number of rape cases successfully prosecuted and convicted have plummeted in the past few years and makes recommendations for tackling the problem. The coalition of agencies publishing the report – End Violence Against Women, Imkaan and Rape Crisis England and Wales – have also written to the secretary of state for justice, Robert Buckland, demanding action.

Of the 55,259 rapes that were reported to the police in 2019, only 2,102 cases were prosecuted and of those only 1,439 resulted in a conviction. The number of cases forwarded by the police to the CPS for consideration has dropped from 6,611 in 2016 to 5,114 in 2019, while the charging rate has dropped from 55 percent to 34 percent. Fewer cases are going to the CPS for consideration and fewer cases are then being prosecuted.

The coalition estimates that there are about 100,000 rapes in England and Wales each year, of which 12,000 of the victims are men. Although reports to the police have tripled since 2012, only 20 percent of women who are raped report it. Three percent of reported cases result in a police charge and only 42 percent of those cases in a guilty verdict – 702 cases. This means that only 0.7 percent of all rape cases – which is just under 1.3 percent of reported cases – result in the offender being found guilty.

The decriminalisation of rape report cites the myth about women consenting to unwanted sex – which is believed by people from all layers and professionals within the criminal justice system – as a major factor in the low rate of convictions. It also notes other barriers, such as a lack of strong evidence and the absence of witnesses or CCTV coverage. Cuts to police budgets have led to investigations being less thorough and cases being closed early. The same is true in the Crown Prosecution Service (CPS), where resource constraints and conviction targets encourage them to close cases early, if a conviction looks unlikely.

The report writers found that recent ‘not guilty’ cases involving some high-profile entertainers accused of sexual assault, has led to a backlash against the presumption of believing victims when they report offences. The CPS now require much more victim information from their phones, computers and medical records before proceeding with a case, and this ‘risk averse’ approach is having a ‘trickledown effect’ on police information gathering.

According to one research study quoted in the decriminalisation of rape report, 77 percent of victims expect to have their (unrelated) sexual behaviour and history questioned in court, and this expectation can deter many from coming forward. Those interviewed felt that their lives, and information about their lives such as that held on their phones, was being used to construct a case against them rather than as a piece in the investigation jigsaw. The experience of those whose cases were investigated and who went to court was generally poor, but there were some exceptions. The work of skilled police liaison officers was noted as being particularly helpful.

Incidents of racism in the investigation process were noted in the report. In one case, an Asian woman was questioned about the risks of forced marriage, rather than the incident she had reported to the police. In another, a black woman who’d been raped by a white male felt her account was questioned on race grounds. Home Office scepticism about accounts of sexual violence was also evident when making asylum or leave to remain decisions.

In their letter to the justice minister Robert Buckland, the coalition summarises their findings:

“The criminal justice system, from police and prosecution service to the courts, is riddled with ‘rape myths’, is disempowering of and even harmful to victims, and sadly includes many leaders who lack professional curiosity as to why the outcomes are so bad and what might be done to change them. Rape survivors quoted in the report describe difficult and distressing experiences engaging with the criminal justice system, with black and minoritised survivors facing multiple barriers to accessing justice, due to institutional racism.”

It appears the coalition may already have had some influence on the criminal justice system, even before final publication of the decriminalisation of rape report. On 1 November, the CPS issued new interim guidance for prosecutors, following the plummeting recent rape prosecution figures. Chapter 4 of the report deals with myths and stereotypes and comprehensively rebuts dozens of myths that inform judgments along the criminal justice chain.

Fundamentally, it reiterates that anyone, male or female, has a right to withdraw consent to sex at any time and, additionally, a person drugged or drunk cannot give consent.