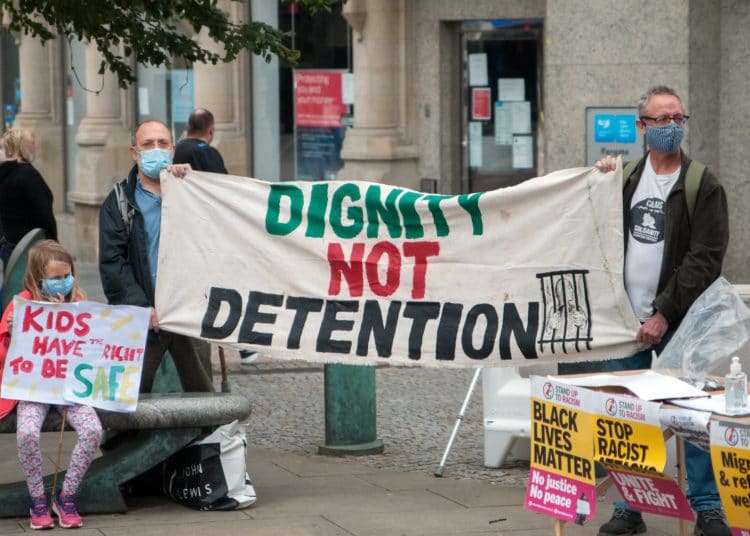 “Safe Passage For Refugees Protest” by Tim Dennell is licensed under CC BY-NC 2.0

The nationality and borders bill passed its second reading in the House of Commons on 20 July and now moves to the committee stage where it will be studied in greater detail. Yorkshire Bylines analysed the bill last week and discussed its likely impact. This piece explores the proposal to ‘off shore’ the asylum application process and the accommodation of those seeking asylum while their cases are being heard and prior to deportation.

I first wrote on the dangers of these proposals in December 2020 when the new immigration rules were published, which stated that refugees might be sent “not only to the particular third countries through which the applicant has travelled, but to any safe third country that might agree to receive them”. I foresaw the risk of an inter-country trade in asylum seekers developing. I was particularly concerned that the EU had already implemented a policy of paying Libya to accept asylum returnees, in spite of the cruelties and abuse inflicted on refugees there.

The bill proposes a number of measures that will prevent arrival and expedite departure from the UK’s shores. It will:

The bill was originally named the sovereign borders bill in the Queen’s speech, copying the title of the Australian sovereign borders policy. This was introduced in 2013 to disallow entry of any person into Australia without prior approval. Australia turns back any boat lacking permission to enter its territorial waters and this provided the model for the clandestine channel threat commander appointment of Dan O’Mahoney last year.

Pushing back boats into the waters of another sovereign country (Australia pushes them back into international waters) is in breach of international law. The government hopes to, “stop and divert vessels suspected of carrying illegal migrants to the UK and, subject to agreement with the relevant country such as France, return them to where their sea journey to the UK began”.

Australia operates a twin-track system whereby people who are given asylum (having applied from outside Australia) are supported for five years and can then apply for citizenship, while those who arrive without any prior application are detained, generally on islands. The conditions on the islands where people are held, sometimes for years, have received widespread condemnation, particularly by the United Nations. While some refugees who have come through unauthorised routes may be given leave to remain for three years, they have no right to settle in Australia. This is the model proposed in the UK bill.

The plans first came to light last September when leaked government papers found their way to the Financial Times and the Guardian when the British Overseas Territory of Ascension Island was being considered as a holding place for asylum applicants and those denied asylum who cannot be repatriated. It was also suggested that it would be introduced retrospectively and include people already in the UK whose cases were in the system but who had not yet been granted asylum.

Detaining those seeking asylum is in breach of the 1951 human rights convention and the courts may eventually decide that ‘accommodating’ refugees in another country while forever denying them an opportunity to leave or start a new life is a form of detention.

The bill intends to render ‘illegal’ and treat as a criminal, every person who arrives in the UK without prior approval. It will:

Anyone arriving by routes other than those supported by the UK government will be, automatically, in breach of asylum processes and it is likely (and intended) that bail will be refused. Automatic detention of asylum seekers is unlawful but the detention of ‘criminals’ seeking asylum is not.

By criminalising the means of entry, all refugees without prior permission to enter the UK will be liable to the criminal law, deportation and detention while their case is being heard – irrespective of the danger they pose, the likely outcome of their asylum application or the length of time they have been in the UK.

The bill will also permit all of those caught and considered to be ‘illegal’ to be immediately sent to any third country, with which we have made an arrangement to receive them – as detainees. Effectively, the UK is offering a trade in humans as a commodity from which other poorer developing countries might profit.

Either on shore or off shore, the government also intends to:

On the face of it, this is a sensible approach. Yorkshire Bylines has extensively covered the failings of the current asylum processing system. The cruelties of the system, the late appeals, wrongful deportation and the cost of the system are largely down to the Home Office’s poor management coupled with chaotic approaches and systems.

The pressure on staff to deny asylum claims leads to poor decision-making and inadequate enquiries. This, in turn, has led to more and more successful appeals but also long delays and huge costs. A ‘one stop shop’ that offered humane, safe and secure, short-term reception accommodation coupled with access to good legal and other advice, and swifter but improved decision-making, is much needed.

However, the government has had plenty of opportunities to improve on its performance and to ensure the current reception centres such as Napier Barracks function better. In June of this year, the accommodation at Napier Barracks was deemed ‘unlawful’ due to its poor state, overcrowding and lack of protection from covid, yet Priti Patel said that she was intent on its retention for receiving refugees. This was several months after the immigration inspectorate’s damning report on the barracks, since when the government has had plenty of time to improve conditions there.

If the government cannot bring reception centres up to a minimum standard when these are located in the UK with almost unlimited access to multi or dual-lingual staff who can be properly trained and supported, there is very little chance that it can ensure humane and effective conditions at a distance. Receptions centres would become like those in Australia and Libya: riddled with abuse. The proposals have been universally condemned by those working with or on behalf of asylum seekers.

The bill’s philosophy is entirely one of deterrence. Last week I outlined how Home Office research shows the futility of this approach. Not only is it ineffective in stopping the movement of people, but as the system becomes more difficult to navigate, the need for intermediaries (people smugglers) grows.

Criminalising asylum seekers will lead to greater use of detention for longer periods, a greater burden on an already overloaded system and a huge increase in costs. A humane policy of welcoming refugees would not only be the right thing to do, but the country would benefit hugely from refugees’ resourcefulness, resilience and likely commitment to the country that has given them sanctuary.