Immigration and asylum in 2020 was dominated by three themes – Brexit, the new immigration criteria and rules, and the rise in the number of refugees crossing the channel. 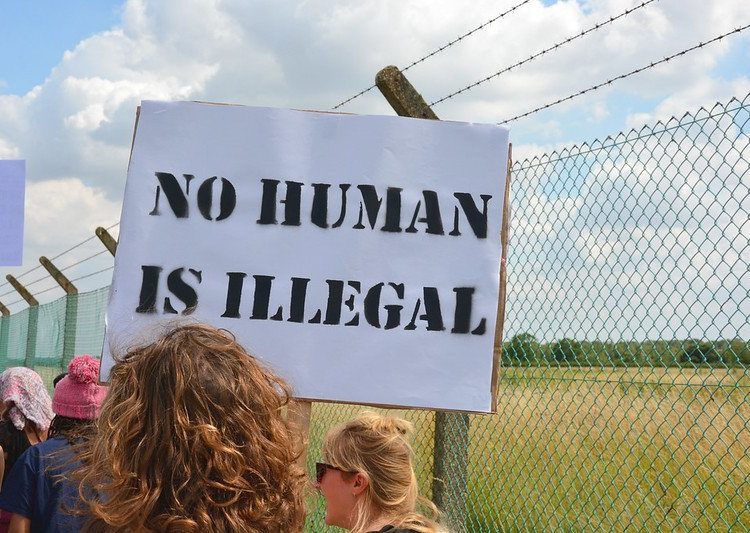 Immigration and asylum in 2020 was dominated by three themes – Brexit, the new immigration criteria and rules, and the rise in the number of refugees crossing the channel.

In January 2020, the government started the year as it meant to go on, by reneging on Theresa May’s promise to reunite unaccompanied child refugees living in the EU with family members in the UK after Brexit.

February was an exceptionally busy month. The Home Office denied immigration detainees access to contact with lawyers and their families before mass deportations to Jamaica, by issuing phones incapable of receiving a phone signal. Emergency court hearings prevented 50 deportations and the court ordered the rest to be suspended until the Home Office could demonstrate that the phones issued to refugees had a functioning sim card.

The first small boats of the year arrived on the Kent coast in February and the Home Office began ‘return’ flights to EU countries under the Dublin III regulations, whereby any EU country can return asylum seekers to the first safe EU country through which they have passed.

Also in February, there were major criticisms of the Windrush compensation scheme, as the press reported that only 36 people (3 percent of those harmed) had received compensation and Priti Patel promised to speed up the process. Allegations of bullying by Patel and tensions with the Home Office permanent secretary Philip Rutnam emerged. Shortly after, Rutnam resigned; he is now taking the government to an industrial tribunal.

The government announced the entry fees for the points-based immigration system, which came into effect on 1 January 2021. The Institute for Government estimated that it will cost a family of five, on a five-year visa, £21,000 before entry. In the same week, a 95-year-old Italian man called Antonio Finelli, was asked to prove 68 years of UK residency by the Home Office, despite having been in receipt of the state pension for 32 years.

Events in March fully revealed the inhumanity of the Home Office immigration system. An immigration detainee was left in a cell for four days with a broken ankle, as staff were “too busy” to take him to hospital. An inquest found that gross errors and neglect had led to the death of another immigration detainee: he died from hypothermia, dehydration and malnutrition. Wendy Williams’ report on the Home Office’s response to the Windrush scandal was also submitted to Patel in March. It found that the Home Office had “a culture of disbelief and carelessness when dealing with applications” and departmental attitudes were “consistent with some elements of the definition of institutional racism”.

By April, the full impact of coronavirus hit the UK. The nation began to understand its debt to immigrants, as the first four doctors who died from coronavirus were buried, all of them immigrants: Dr Alfa Saadu, 68, Amged el-Hawrani, 55, Adil El Tayar, 64 and Dr Habib Zaidi, 76. The government announced a 12-month, fee-free visa extension for NHS doctors, nurses and paramedics.

In May, the government extended visa rights to Hong Kong residents. Many hundreds of refugees continued to cross the channel in small boats, but deportations and return flights stopped, as air travel ground to a halt.

The National Audit Office found in June that the government was making life “intolerable” for people it suspected of being illegal immigrants, and the Home Office could provide no evidence to indicate this was effective in making people leave the country. Nor could the government provide an estimate of how many illegal immigrants there might be in the UK. Also in June, Public Health England published its report on the disproportionate impact of coronavirus on black, Asian and minority ethnic people.

In July, the country opened up following the coronavirus lockdown and by August Patel (and the Home Office) was back on full throttle in her anti-refugee crusade. Returns increased to EU countries at an unprecedented rate to make up for lost time and the approaching end to the transition period when this practice would have to end. Patel also vowed to make the channel route “unviable” for small boat crossings and appointed a ‘clandestine channel threat commander’ to implement this. The government considered deterrent measures, such as creating waves to push refugees back into French waters, or nets to snag motors.

As the numbers of refugees kept arriving with the better weather, Kent County Council announced it could not take any more child refugees, as all its accommodation was full. Norfolk County Council offered to take the children, and with much support from other agencies and volunteers has accommodated over 50 to date.

In September, the Commons public accounts committee reported that the Home Office immigration policy was based on “anecdote, assumption and prejudice”, was “unaware” of the damage and impact of its policies, and had no evidence of its effectiveness. It found the government was unwilling to learn from mistakes including the Windrush scandal. The government restarted its eviction of asylum seekers who had been denied leave to remain and housed during the early part of the pandemic.

At the Conservative Party conference in October, Patel attacked “do-gooders” and “lefty-lawyers”, accusing them of creating delays in the immigration. Her accusations led to attacks on immigration lawyers. In the same week, a Justice Inspectorates report on the detention centres for those arriving by small boats found that the arrangements were unsuitable, unsanitary and not covid compliant, and that a failure to ensure good access to legal advice and support services contributed to delays in cases being heard.

Also in October, Wendy Williams, author of the Windrush ‘lessons learned’ report, criticised the Home Office for insufficient progress on righting Windrush wrongs and implementing the report’s recommendations. The Home Office announced that foreign rough sleepers would be deported from the UK following Brexit.

In November, a judge ordered an immediate halt to evictions of people denied leave to remain in the UK and, subsequently, the Home Office suspended the timetable as the second national lockdown commenced. Alexandra Ankrah, a government adviser on the Windrush programme, resigned complaining about the Home Office’s “lack of humanity” toward victims.

Just in time for Christmas, the government published the new immigration rules, in which it states it will deny asylum applications from those who have passed through a safe country. The new rules also permit the UK to remove asylum seekers to any safe country that will accept them.

At the end of the year, a Guardian freedom of Information request revealed that 29 refugees had died in immigration detention during the year.

Yorkshire Bylines has written frequently about how the hostile environment is affecting refugees and those supporting them. There are a number of voluntary and statutory organisations working hard to minimise harm and to help those who arrive on our shores. A special mention must go to Kent Refugee Action Network, which has worked tirelessly over the year to welcome and support refugees arriving on the shingle in Kent and in local detention.

Closer to home, refugee organisations in Yorkshire continued to support refugees throughout 2020, sometimes in very difficult circumstances. One of those that could do with your support just now is Bradford Immigration and Asylum Seekers Support Network. While unable to continue with social, creative and fun activities, it has continued to provide food, individual support, language tuition, legal advice, clothing and furniture – all at a socially distanced two metres throughout the pandemic. The need is great and donations can be made here.

We would also recommend the work of the Refugee Council, among many other excellent organisations.