Over 150 protesters gathered outside Halifax Town Hall on Sunday to protest the nationality and borders bill. 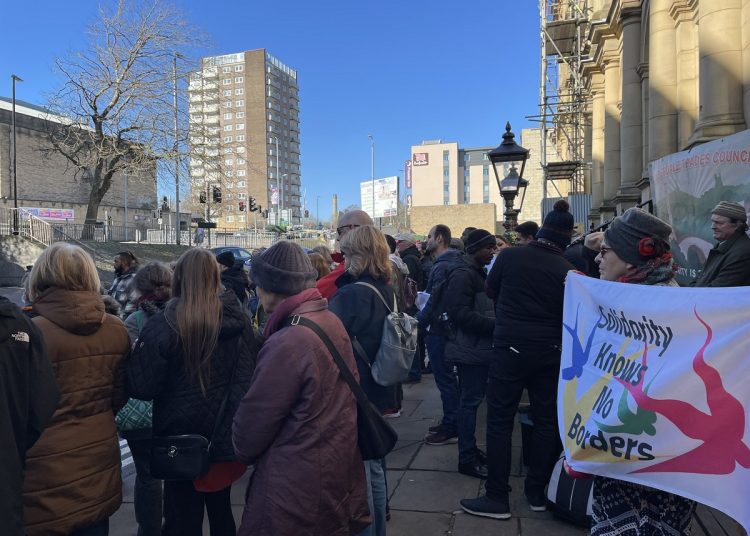 In Halifax on Sunday, over 150 protesters gathered outside the town hall to protest against Priti Patel’s unpopular and widely criticised nationality and borders bill. The MP for Halifax, Holly Lynch, spoke in opposition to the bill, as did deputy mayor of West Yorkshire Alison Lowe, on Mayor Tracy Brabin’s behalf.

The bill, which proposes major changes to UK asylum law, has successfully gone through the House of Commons and is now being debated in the House of Lords. Several of the bill’s clauses have been called into question by opposition parties, charities, voluntary organisations and the United Nations, with protesters saying it will create a hostile environment for refugees and asylum seekers.

Halifax protest against the nationality and borders bill

“I’m very aware of how difficult it is to be a refugee, and how unwelcoming sometimes we are as a country, although not here in Calderdale, I think Calderdale is one of the best regions I’ve heard about.”

Amber, another volunteer from the refugee centre said:

“The conflict in Ukraine illuminates the real problem with the nationality and borders bill, because there are no safe routes open. We have to make changes to this bill to make sure we can welcome people when conflict happens.”

Clause 9 of the bill will mean that the Secretary of State and Home Office can deprive dual nationals of their British citizenship without notice, if it is believed it’s in the interests of national security or otherwise in the public interest.

Clause 11 has the effect of creating two separate groups of refugee and asylum seekers – one legal, and one illegal. As a consequence, people in each group can be treated differently. The prison sentence for ‘unlawful’ entry into the UK will be increased from six months to four years.

The UN Refugee Agency has expressed concerns about the bill, particularly the two-tier approach:

“We recognise the need to improve some asylum procedures, but these plans threaten to create a discriminatory two-tier asylum system, undermining the 1951 Refugee Convention and longstanding global cooperation on refugee issues. It’s not too late for a rethink. We’re ready to work with the UK on alternative reforms.”

Clause 15 imposes the controversial ‘first safe country’ rule, where if someone has entered through a country prior to the UK where they could have claimed asylum, the UK does not need to grant that person asylum.

Clause 17, 18 and 25 will mean evidence provided after a claimant’s specific date will have less weight, and late provision will damage a claimant’s credibility.

Clause 19 states that those served with ‘priority removal notices’ can only receive a maximum seven hours of legal aid. This is considered unfair when taking into account how complex the UK immigration system is, being governed by 20 different statues.

Clause 26 covers accelerated detained appeals, in an attempt to fast-track the British immigration system and deal with the backlog of claims, possibly at the cost of fairness and proper handling of cases.

Clause 26 gives deciding authorities the power to certify claims as ‘clearly unfounded’ and remove the claimant’s right to appeal that decision.

Veecca Smith Uka, an organiser with These Walls Must Fall said: “These are just some of the draconian and racist aspects of the bill which if passed would create another Windrush Scandal on a much larger scale and breach a range of international human rights laws.”

The protest was organised by several action groups: These Walls Must Fall, Solidarity Knows No Borders, Leeds Anti-Raids and Migrants Organise, and members of these groups gave speeches throughout the protest.

Phoebe is a master's journalism student, who studied law at undergraduate level. Originally from Somerset, she has moved to Yorkshire to complete her studies.