Jack Walker picks apart the lunacy of the hashtag #NotAllMen, which attempts to make people aware that not all men harass women. He acknowledges the privilege that men possess in terms of safety, and urges men to do more by calling out misogyny. 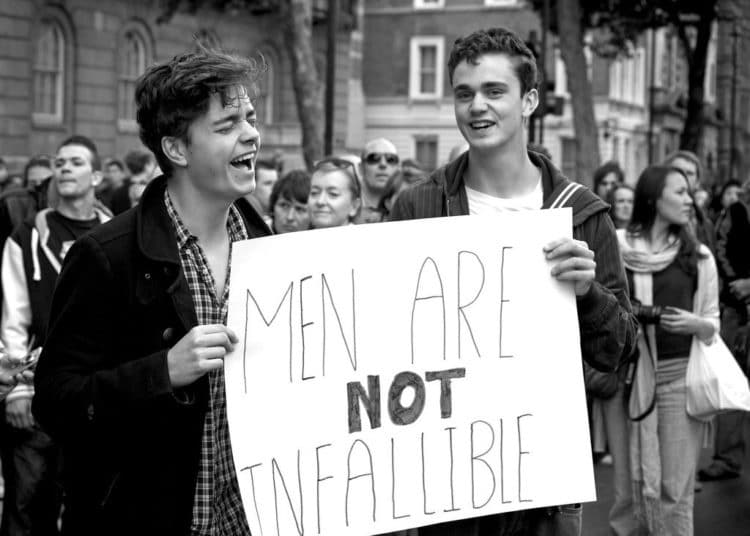 “Protest the Pope – 14 – Not Infallible” by lewishamdreamer is licensed under CC BY-NC 2.0

This article was particularly hard for me to write in light of the past few weeks, particularly as a man writing about women’s issues. However, I believe that men need to speak up more, partly in solidarity, partly in disgust for what has happened since Sarah Everard first went missing around the night of 3 March 2021.

Sarah Everard, a 33-year-old marketing executive, disappeared on her walk home through Clapham Common, London, after leaving a friend’s house on the evening of 3 March. On 10 March, her remains were discovered in a builder’s bag in woodlands near Ashford, Kent. A 48-year-old police officer has been charged with her murder.

The vigil for Sarah Everard and the reaction from police

On 13 March, a candlelight vigil was held on Clapham Common in an expression of solidarity for Everard’s death. The Metropolitan Police responded with a heavy-handed clampdown of the event, leading to four arrests for what the police described as a “breach of Covid-19 regulations”. Earlier in the day, the Duchess of Cambridge paid her respects at the vigil.

Alongside the in-person protests by large sections of society, demanding nothing more than the right for women to walk anywhere anytime in safety, without having to think about if they might be attacked or abused by a man, a very different kind of protest was brewing online.

The hashtag #NotAllMen went viral on Twitter, with scores of individual men keen to remind the world that they were not abusers or rapists or murderers, as if this somehow made the entire problem disappear.

Try as I might to resist arguing with people on social media, I have responded personally on more than one occasion to men – and on the rare occasion, women – who have used the hashtag. The general thinking behind the hashtag seems to be that men as a whole should not be blamed for the actions of a minority.

The lunacy of #NotAllMen

Except this argument is deeply flawed and frankly insulting to the 97 percent of women aged 18 to 24 who reported that they have been sexually harassed by men. Everyone knows that not every single man is not harassing women. That is not why there is so much outrage.

The point is that people who are not male do not know exactly which men are abusers and harassers. They have no choice but to be suspicious of all men out of fear of the unknown.

#NotAllMen focuses attention away from the fact that women are being harassed and assaulted, instead concentrating attention on men who are keen to remind the world that they are not harassing and assaulting women.

Women are the victims here. Sarah Everard is a victim. Men have murdered 30 other women in 2021 alone. These women are all victims. The fragile male ego, in its sheer haste to protect and defend itself at the slightest threat, is not the victim here.

For the record – before anyone says “what about the men?” – nobody is saying that female-on-male violence does not take place. Anyone who is a victim of violence deserves to be heard and believed.

Yet #NotAllMen would have you believe that only male victims deserve to be heard – when a woman is a victim, men simply shrink into their shells to remind the world that it wasn’t them. Case closed, problem solved.

Having spoken to several female friends while trying to find a way to translate my rage into cogent sentences, I was astonished and frankly appalled at the fact that men are still trying to make #NotAllMen work.

I, a man, can quite easily walk down Leeds high street at any time – day or night – with my headphones in, rarely having to consider my safety or security. When I said this to my female friends in text conversations while planning this article, I got the feeling that if I had been with them in person they would have laughed at me. Not one of them told me that they would feel safe replicating my actions, especially at night.

Male privilege can be hard for men to recognise, as we go through life not thinking about which man might sexually assault us. We don’t have to feel for our keys in our pocket as a last resort of self-defence if we are followed home.

The best thing we can do to recognise our privilege is to listen our non-male friends and relatives when they tell of us their experiences. Believe them. Empathise with them. Listen to them if they tell you of their experiences or confide in you.

Call out and educate your male friends or relatives, or even strangers if you hear or see misogyny or abuse taking place.

Women shouldn’t have to fear abuse, harassment or becoming the victim of an attack simply by walking down the street. Sarah Everard is just the latest in a long line of female victims who have suffered at the hands of men.