The government is selling off the NHS bit by bit; first it was dental care, then the primary care system, not to mention the covid contracts. 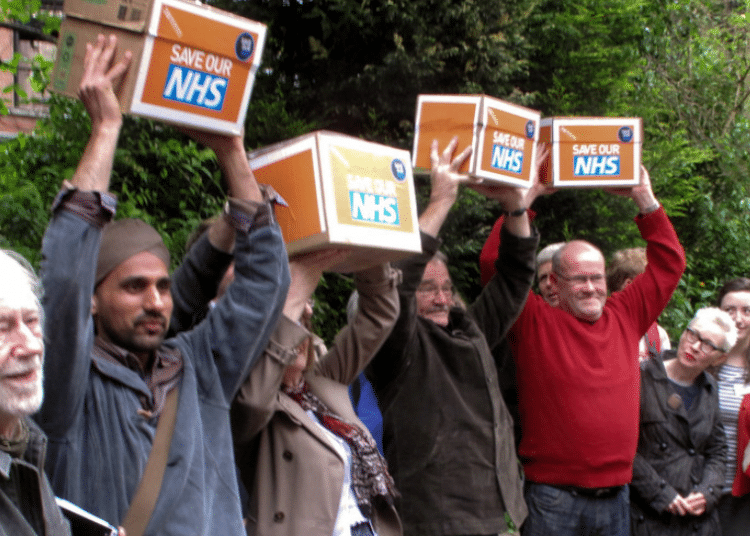 Selling off the NHS - former campaign to 'save the NHS' - "NHS Petition Hand-in: Nick Clegg" by 38 Degrees is licensed under CC BY 2.0

Listen to any Conservative politician talking about the NHS and it will not be long before you will hear them promise that it is safe in their hands. Which may be why it is in such peril.

There never will be a day when a government minister stands up and openly states that the intention is to privatise it. Instead, the change is happening gradually. Slowly, or not so very slowly, a service that the vast majority of voters value is being stripped down and losing its core purpose.

What has happened to dental services is a worrying example of what is currently happening to the rest of the NHS. Fifty years ago, anyone anywhere in the country could visit a national health dentist and be completely confident that they would be taken onto their books. It was free at the point of service and the dentists who delivered that service were usually personally responsible for the standard of work they performed.

Now, there are whole swathes of the country where it is impossible to obtain an NHS dentist. Large numbers of people routinely pay to go private and in many places the system that was once a source of national pride has become an empty promise of care for all. If available, the service is likely to be delivered by a chain of providers owned by some remote company who employs the actual dentists as jobbing labourers. If not available, your child may end up screaming in pain with toothache until you finally pay up.

Then consider the situation in primary care. That has already been almost completely privatised. It is extraordinarily rare to find an NHS practice which consists of a service provided by local doctors who can make their own decisions about how long they spend with each of their patients or whether they make a home visit.

Instead, almost all general practitioners are being told by a private employer that they must deal with every customer inside a 15-minute timeslot or via a quick phone call before moving on to the next business opportunity.

In recent years, worrying numbers of experienced doctors and nurses have simply given up under the pressure, with many reporting serious stress levels over the risks that over-quick checks will result in misdiagnosis. Sick patients have to battle with clogged-up phone lines to get an appointment several weeks from now if they want to see a doctor who is familiar with their case.

Across the NHS, simple services such as vaccinations have been progressively hived off so that they can be delivered by companies extracting a high degree of profit from providing a public service. Every needle that goes into every arm is a genuine help in the battle against covid. Almost every one also represents an improvement in the dividends paid to shareholders or partners.

Complex unprofitable work such as looking after a covid patient in an intensive care bed remains the province of the NHS. More straightforward work such as blood tests has increasingly been contracted out. Not because private services are one drop more efficient on such matters. Because there is a bigoted ideological conviction that people who work for the public can never do a job as efficiently as those who are working for profit.

NHS waiting lists and the option to jump the queue

Then there is the problem of waiting lists. If you are in daily pain because of a need for a hip operation and have the necessary funds, few people are prepared to resist the opportunity to get the work done quickly. Others might need to do the same for a cataract removal or for physiotherapy. Each year more people decide to go private. Each year the waiting lists for those who can’t afford it get longer and the pressure to join in those going private increases.

The trend line is heading in a disturbing direction. Those who are less well-off might have access to healthcare that is free at the point of use – but they will have to wait a long time to get it. And when it is provided, it will be done by over-stressed people working incredibly long hours asking themselves how long they can continue to dedicate themselves to an unequal struggle.

As fewer well-off people use the service, the pressure to improve it is likely to reduce. As those people pay for the bulk of their own health care and take out expensive insurance policies to pay for it, more and more of them will start to question why they need to pay taxes to fund a service that no one in their family would wish to use.

In such circumstances, fixing the NHS is no longer just a question of money, important as that is. It does not matter how much your pour into a jug if there is a hole in the bottom. In the States, they spend billions more than Britain each year on health care. Despite that, ill health remains one of the leading causes of bankruptcy amongst the middle classes and for skilled workers, and treatments cost much more than in Britain.

During covid there has been clear evidence that sloppy controls over contracting has resulted in huge quantities of public money being syphoned off to enrich people with good contacts in government. Instead of using money wisely and restoring proper controls Boris Johnson’s team are busily working on routinely reducing the controls over contracting out. Incredibly, new reforms mean that representatives of the privatised primary care organisations will sit on the bodies that make the decisions about how to use public health funding.

This is part of yet another top down re-organisation launched by a Conservative Party that came to office promising to put an end to them. Some aspects of the changes, such as the recognition that care and health are closely linked are welcome. An increase in contracting out and a reduction in the controls over it are not.

The NHS is NOT safe in their hands

This isn’t a case of keeping the NHS safe and responsibly reforming it. It is a case of a government deliberately hiding their intentions from the public as they create an American style of service that works to put money in the pocket of increasingly remote private providers but doesn’t work to help the public.

Throughout the pandemic we have been protected by the work of some extraordinarily dedicated people putting their own lives at risk because they care about helping others. Whilst they have been working flat out others have lined their own pocket. Now the government is seeking to make it easier for money to be sucked out of the system.

No wonder the country is suffering from an outbreak of mass cynicism.