No amount of media coverage of #Partygate can disguise the devastating effects on the NHS of a decade of Conservative privatisation and cuts. 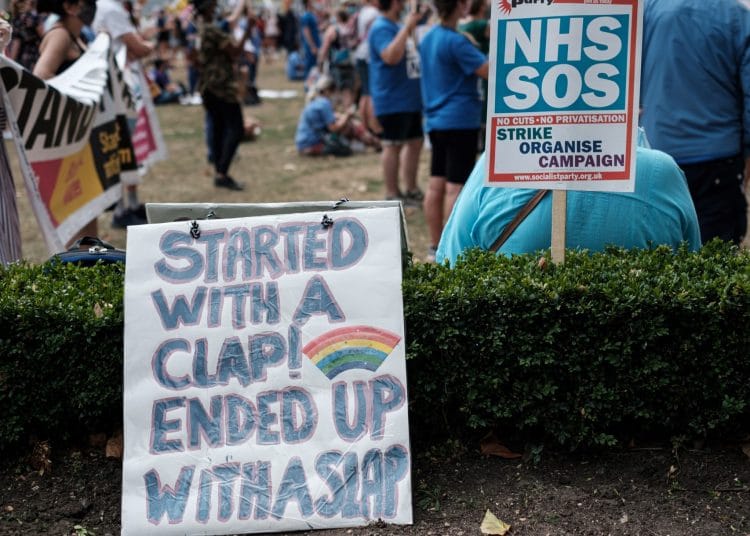 “The prime minister is trying to save his own skin in the wake of #partygate, but what he should actually be doing is concentrating on saving the NHS”, says CEO of EveryDoctor, Dr Julia Patterson. Head of policy, Dr Megan Smith confirms that the NHS is under the most intense pressure it has ever had to face:

“Every part of it is now close to the point of collapse: GPs are stretched to breaking point; ambulance waiting times are at record levels, A&Es are full with very long waiting times and there aren’t enough hospital ward beds or healthcare workers to staff them.”

This highlights the impact on patient healthcare of a decade of under-funding and privatisation, and the effect of staff leaving as Brexit ended freedom of movement.

GP Dr Kath Fielder explains that while everyone is trying to hold the NHS together, normal clinical decisions about referrals or emergency admissions are now subject to agonising over whether the referral will be rejected, whether they will be treated in time, patched up and sent home only to re-appear shortly again, and whether an ambulance will arrive in time.

An A&E doctor in the south of England said a 20-hour wait for a bed on a ward is not unusual:

“The system is broken and nobody seems to care… We want to do the best for our patients, but how can we?”

As Dr Patterson said: “The realities are terrifying. It will take years to deal with the backlog of patients,” warning that the NHS is unsafe and care has been unsafe for years. 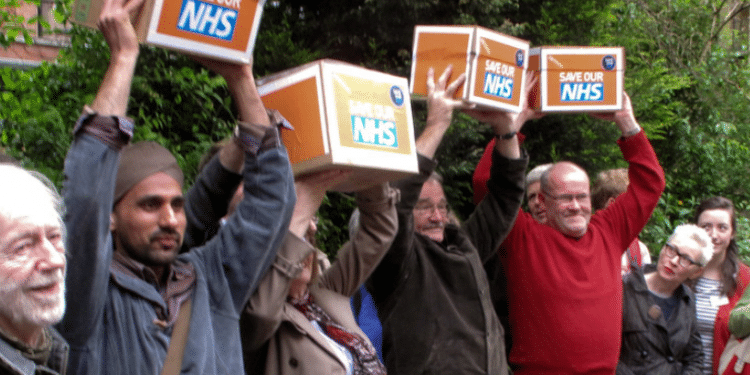 Adding to this is the mounting winter crisis, which is nothing new for the NHS, but is worse than usual. Omicron is “a very severe setback” as Professor John Edmunds, an epidemiologist at the London School of Hygiene and Tropical Medicine and member of the government’s Scientific Advisory Group for Emergencies made clear. The exponential increases in cases, he added, “will result in a large number of hospitalisations, and unfortunately …a large number of deaths”.

The Health Security Agency expects a million Omicron infections by the end of the month and there is as yet no firm evidence that Omicron will be milder than Delta. The NHS could be completely overwhelmed.

Preparing us for privatisation?

Hospital appointments have been repeatedly postponed; waiting lists grow; and people grumble about waiting for over a week for a telephone GP appointment and about pharmacies unable to get meds delivered on time. Is going private the only option?

A cynic might think this is exactly what we are supposed to be thinking – that we’re being softened up by the attrition of the NHS highlighted by EveryDoctor for what’s about to hit us in the form of the health and care bill.

The health and care bill: increasing privatisation of the NHS

The threat this bill poses to the NHS as we know it is well described in a chilling ‘Fact Pack’ report produced in September by the 99% Organisation NHS project team, which included former NHS consultants, management consultants, social workers and patients with extensive experience of the NHS.

It concluded that the bill threatens the efficiency, effectiveness and accessibility of the NHS as a universal health service free at the point of use. Why? Because the government is moving fast towards the US model – the worst performing health system in the developed world, where private shareholder and commercial interests dominate.

The bill’s aim to put power in the hands of ministers and the integrated care boards allows ministers to get round normal procurement rules and award contracts at will. So it builds in the cronyism and huge commercial money-making opportunities we saw regarding PPE contracts. And we all know how discriminatory healthcare is in the US and how bankruptcy and bills for ICU care are the norm. The health and care bill puts us on that slippery slope.

As Mark Thomas of the 99% Organisation states, “there is an enormous commercial incentive … to move the NHS towards the US system” and “without amendment, the bill poses a grave risk to the NHS itself and to UK taxpayers and patients”.

Stephen Fry calls the health and care bill “the greatest threat to the NHS since its foundation”. He begs us to “think about what it would mean for your family if we had a system like the US. Please read, sign the petition and share!”

NHS in the hands of an untrustworthy government

We see the decimation of the NHS all around us. We hear the warnings and pleas from GPs, professionals, social and healthcare workers and experts.

But our healthcare system is in the hands of a government who have lost our trust. They send out, at best, mixed messages and seemingly exempt themselves from following the rules. As former Speaker of the House of Commons, John Bercow, said, the reputational damage of #partygate is all pervasive. We have the worst prime minister “by a country mile”, who “stinks in the nostrils of decent people”.

Scapegoating the NHS and health and social care staff to try and cover up the “wilful dismantling of the NHS”, as Dr Patterson put it, sees desperate doctors speaking out about under-resourcing, under-staffing, staff breakdowns and “patients dying as a result”. Blaming GPs is a cheap trick to try to shift blame and responsibility.

The bill makes clear the government’s intention to end the system where we get free health care when we, and our families, need it regardless of whether or not we have taken out enough private health insurance to pay for it. Need for healthcare not capacity to pay for it is at the basis of the NHS.  It was founded in 1948 and dismantling and privatising it will affect us all.

What can we do? For the moment, we can put pressure on our MPs. We can ask them to explain how they are voting on sections of the bill. We can express our views. We can ask them to oppose the bill and vote against it. But we must also take personal responsibility for protecting the NHS and each other by masking up, resisting partying, ventilating classrooms and opening windows at home. We can also inform ourselves and require our MPs to justify what is happening and to back campaigns such as EveryDoctor and 99% to support professionals in their fight to retain the NHS’s fundamental principles.

Then, we have to hope for a political change in the weather to come in time.