While the rest of the country enjoyed the easing of lockdown across England on 4 July, Leicester remained closed following an announcement by the secretary of state for health, Matt Hancock on 27 June. 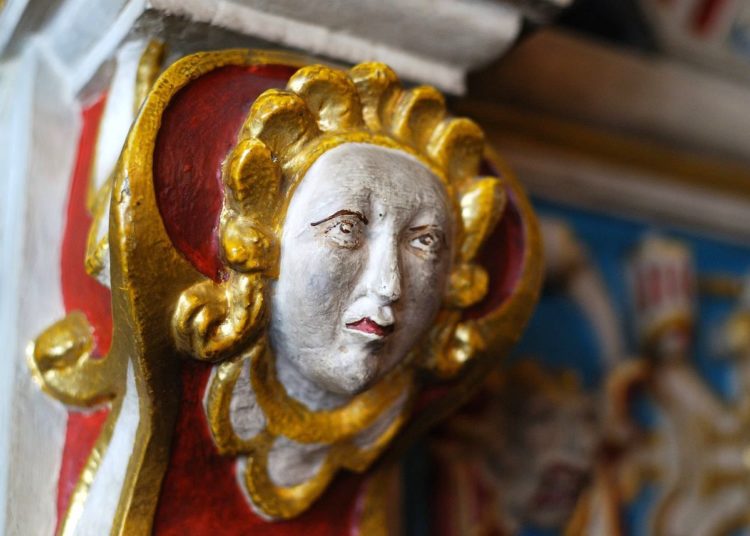 A painted angel on the ornate fireplace inside the mayor’s parlour at the Guildhall in Leicester Picture: Matt Neale, licensed under the Creative Commons Attribution 2.0 Generic license.

While the rest of the country enjoyed the easing of lockdown across England on 4 July, Leicester remained closed following an announcement by the secretary of state for health, Matt Hancock on 27 June. This followed a reported upsurge of cases with 658 being recorded in the week beginning 16 June, 10 per cent of the country’s total.

At prime minister’s questions on 1 July, Keir Starmer challenged Boris Johnson about the information that had been provided to the city’s authorities. Pillar one data – the number of cases identified through hospital testing, had been provided but not pillar two data, the results from testing undertaken by post or at community venues. Starmer said, “What that meant was that the local authority thought there were 80 positive tests in the last fortnight when the real figure was 944”.

Johnson replied that Leicester had been provided with both pillar one and pillar two data but was again corrected by Starmer who said he had spoken to the mayor that morning who said the information had not been received until a few days previously. Neither Johnson nor Starmer disagreed with the lockdown measures ordered.

Johnson, in defence of the government’s actions in closing down the city, stated that in Leicester there were difficulties in “implementing the advice and getting people to understand what was necessary to do” and that the “government has had to act … to protect the health of the entire country”. In one short statement, he managed to blame the people of Leicester and the local authority for putting the rest of the country at risk.

The mayor of Leicester, Peter Soulsby, issued a statement on 8 July, outlining the steps the city had taken to manage coronavirus with a chronology of events and what the testing data shows. In the statement he says that the city, prior to mid-June, had been relying on the death rate and hospital admission rates to gauge the level of infection across the city, noting:

“Since the launch of the test and trace system at the beginning May 2020 our Director of Public Health (DPH) repeatedly asked Public Health England (PHE) to allow us access to results data, preferably at postcode or LSOA [lower layer super output area] level, so that we could monitor our local picture. This data was not forthcoming to us or other councils. The reason given for this was that it wasn’t in a fit state to publish because it hadn’t been cleaned. This was the data feed from the test and trace system that the PM had launched as ‘world beating’.”

From 1 June, the DPH was provided with some information on pillar two infections but only at a citywide level. The figures in pillar one suggested Leicester was below the national average and the DPH advised that no change in policy was indicated. At that point, it was not clear to the DPH if the higher pillar two infections were because of increased levels of testing or increased levels of infection.

Public Health England confirmed that Leicester had a problem on 15 June, but added “we have not identified … an outbreak to date”. It recommended to the government that Leicester did not ease the restrictions in place including those on pubs and shops which were due to ease on 4 July. The government opted, instead to reintroduce a full lockdown.

Even after stating there had been an outbreak that warranted lockdown, only one additional mobile testing centre was sent to Leicester and only for one day (20 June). It was not until 25 June that pillar two data with postcodes was provided.

In the media, the Leicester increase had been attributed to a number of factors – food processing plants, garment factories that had ignored lockdown, the high number of inter-generational households and the high number of high-risk residents, particularly those from black and ethnic minority communities or those living in poverty. All of this was conjecture. Meanwhile, the city sought to understand better the source of infections and so prevent their spread.

Having finally got the data, the mayor’s office found that much of it was wrong and unusable for prevention purposes. Employment was often only recorded in respect of one member of a household – for example, an 8 year old is shown as being a health care worker – and ethnicity was not included in about half of the cases.

Soulsby, the mayor, explains why the data has been so ineffective:

“In the absence of analysis at street or LSOA level and without place of work or ethnicity the data gives no clue as to whether the speculation about workplace, schools or ethnicity may have any part in the prevalence of the virus. It has been convenient to blame these factors – but the truth is that none of us – the government, PHE or the council – know because they haven’t got the data.”

The council has still not been provided with information about the number of negative tests so it is still not clear if the high level of infections was a consequence of increased testing or a real spike in cases. Given that there is now more testing in Leicester, it is likely that the level of infections will continue to be disproportionately higher than elsewhere in the country. Nor does the data state how many people have been tested, only the number of positive tests, so the city still has very little idea of the proportion of people that have been infected.

The mayor sets out what the city needs from the government in order to better manage, locally, the infection. This includes more testing and the results of both positive and negative tests (people not only tests), accurate postcodes, ethnicity and workplace information, and random sampling and contact tracing data. He also says that towns and cities should know the level of infection that might trigger a lockdown and how it will be measured. He ends by querying if the lockdown has simply been “a gesture to warn the rest of the country”.