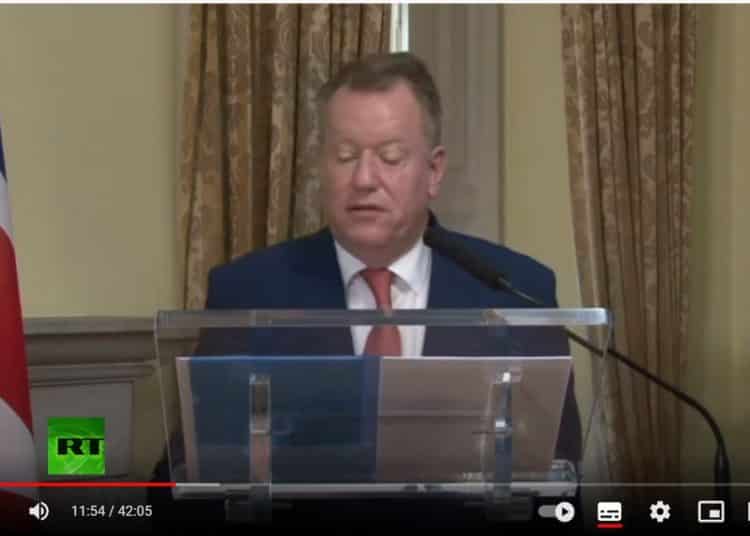 If the chances of the EU shifting its long-standing position and agreeing to Britain’s request to renegotiate the Northern Ireland protocol were always very low, Lord Frost’s bizarre speech at the British embassy in Lisbon yesterday put paid to them altogether.

It was as if the UK’s chief negotiator was deliberately trying to head off the last slight prospect of the EU offering what he was demanding.

The speech, peppered with digs at the EU and half-veiled threats, was a withered olive branch delivered with menace. Coming on the eve of the EU offering major concessions, it seemed designed to rile the EU27 and the Commission into hardening their position.

Frost appeared shifty and almost embarrassed throughout, as well he might be. The speech was grandly titled: Observations on the present state of the nation, delivered to widespread news coverage across Europe about the chaos and food and fuel shortages as the UK economy slowly sinks under the weight of Brexit contradictions.

It was like listening to a lecture on investment strategy given by the convicted fraudster Bernie Madoff in prison uniform.

Did the government ever intend to adhere to the Northern Ireland protocol?

Many commentators have suggested that Johnson never intended to stick to the terms of the protocol that he suggested, negotiated, signed and sold to the voters in 2019; that he had somehow negotiated with the EU27 in bad faith.

This appeared to be confirmed by a tweet from his former senior adviser Dominic Cummings following Frost’s speech:

We took over a party on ~10%, worst constitutional crisis in century, much of deep state angling for BINO or 2REF. So we wriggled thro with best option we cd & intended to get the 🛒 to ditch bits we didn't like after whacking Corbyn. We prioritised. Now time for IM2 #Frosty

They apparently went into talks with Barnier fully intending to “ditch bits we didn’t like after whacking Corbyn”.

Cummings in a later tweet defended this by claiming that “states break [international law] every week.” Probably the best answer to this came from trade negotiator Dmitry Grozoubinski:

The reason you try to abide by international law whenever possible isn't that it's sacred or powerfully enforced.

It's because you don't want to send other countries, who also have messy domestic politics, the message their commitments are also optional.

A child can grasp this.

The government appears to be looking for any excuse to trigger article 16, while the EU are working hard to avoid giving the UK the opportunity of manufacturing one. But if it wasn’t already clear to the Commission that Britain is intent on breaching the terms of the deal agreed just two years ago, yesterday’s speech in Portugal probably dispelled any doubt.

Lord Frost made five points, but the last one was key:

Frost said the UK no longer has an interest in coalition-building across the EU to shape EU rules because, “Brexit has changed our international interests and hence will change our patterns of European relationships – not necessarily fundamentally, but significantly”,

The international trade consultant David Henig saw that as a unique position since even the US and China want to influence EU regulations, recognising their importance; but not, apparently, the UK.

We are clearly going back to treating Europe as 27 separate states, sidelining the EU whenever possible and trying to control the balance of power from the outside, as if the clock has been turned back 200 years with Britain restored as head of the world order. It is a new ‘divide and rule’ policy which is bound to fail.

His audience in Brussels will no doubt have been bemused by this dig:

“We look with fascination at debates that in some way echo ours, like that in Poland, Germany, and seemingly even now France about the role of the Court of Justice. But we cannot affect these outcomes except by example; and it would not be correct for us to try.”

In other words, we are going to try to break up the European project by giving as much encouragement ‘by example’ as possible to every sovereignty-seeking nationalist or right-wing extremist wherever we can.  Europe has been warned.

Britain’s influence in Europe will in future come “through the power of example”, Frost explained. This was presumably addressed to those EU member states who were looking to achieve spiralling inflation and a diminishing of productivity levels back to those of a banana republic.

Others may be interested in emulating the UK by holding mass wrestling competitions on filling station forecourts, the winner taking away 30 litres of E10. Or perhaps a version of supermarket sweep where players compete by racing around with empty trolleys trying to find something on a shelf to purchase.

Brexit is about democracy

The “fundamental element of the Brexit project is about democracy” he said, allowing us to “set our own ways of doing things in our own way”.

By way of an example, he cited the “very lively discussion of migration policy” as the food producers, hospitality and logistics scream about the shortage of workers and plead with the government to reverse the block on recruiting EU workers to fill record vacancies now threatening to stall our economic recovery.

He also did not “see anything wrong with Brexit being described as a populist policy” if it meant doing “what people want – challenging a technocratic consensus”, and by this he was presumably talking about things like burying our exporters under mountains of red tape and erecting huge barriers to trade with our largest overseas market.

He did not explain how the ‘17.4 million who voted to leave in the 2016 referendum’ was the democratically expressed ‘will of the people’ that must be delivered regardless of hardship, while the ’14 million who voted Conservative in 2019 and presumably supported the ‘oven ready’ Northern Ireland protocol’ can be ignored.

It is a pick ‘n mix democracy.

Can we fix the UK / EU relationship?

Speaking as the man more responsible than anyone, perhaps second only to the prime minister, for helping to create a poisonous relationship with Europe, asking this rhetorical question will ring a little hollow.

Frost made no apology for his own previous confrontational behaviour or the various casual insults of his boss, lazing at the time on a beach near Zac Goldsmith’s villa in Marbella on the other side of the Iberian peninsula. Instead, he chose to list a few whataboutery examples of the ‘wrong doings’ of the EU as he saw them, starting with the “extreme tensions” over the EU’s vaccine “ban” earlier this year.

There was no such ban, only the proposal for one that lasted three hours. And he criticised the “knee-jerk resort to legal action on Northern Ireland” when the UK broke international law and unilaterally extended the grace period.

Frost also included in the list the “needless ban on the import of most shellfish to the EU”, something we supported when we were a member state.

It was akin to Herman Goering claiming the Nuremberg trials were a knee-jerk reaction and counter accusing Winston Churchill of once riding a bike without lights after dark. Again, not calculated to cool heads and persuade the EU to take a softer line. 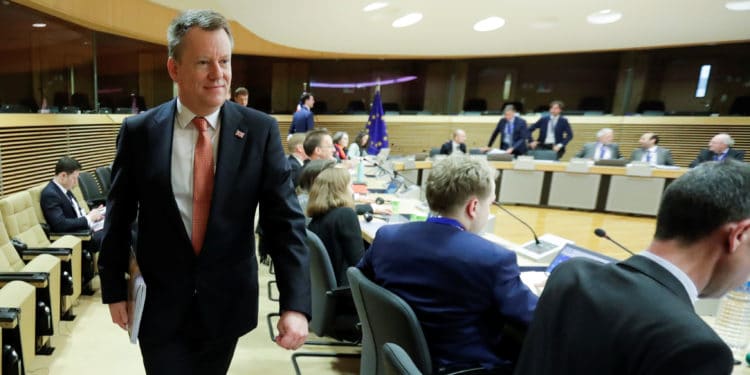 Finally, he came to the real point of it all – the Northern Ireland protocol. He said it was the “biggest source of mistrust between us” and for all kinds of reasons he said, ‘we’ need to fix it. ‘We’ of course meaning ‘Brussels’, who must accept the entirely new legal text that he has drafted up.

Many of the statements he made in the speech were simply not true, as he must have known, but specifically his claims on the protocol do not align with the reality:

We are being asked to run a full-scale external boundary of the EU through the centre of our country.

Nobody asked; this is what Boris Johnson himself demanded in his letter to Jean Claude Juncker 2 October 2019. He asked to run the EU external border with goods and agri-food regulations in Northern Ireland being “the same as those in the rest of the EU” and “identity and documentary checks and physical examination [carried out] by UK authorities as required by the relevant EU rules”.

The [protocol] is disrupting ordinary lives, damaging large and small businesses, and causing serious turbulence to the institutions of the Belfast (Good Friday) Agreement within Northern Ireland.

There is very little disruption in Northern Ireland compared to Great Britain. Broken supply chains have quickly adapted and reconfigured to obtain food and other supplies from across the frictionless land border in Ireland – as a direct benefit of the protocol.

Of what little ‘disruption’ there is, none at all is connected to the role of the European Court of Justice, which has not ruled on anything and has no cases in its backlog related to Northern Ireland. Yet this is this is the main bone of contention for Frost and Johnson.

The system […] means the EU can make laws which apply in Northern Ireland without any kind of democratic scrutiny or discussion.

This was voted for by our 653 democratic representatives in Westminster when the withdrawal agreement was debated in October 2019 and endorsed in the general election of 2019. If it lacked democratic scrutiny, the fault cannot be attributed to Brussels.

The absolute state of David Frost trashing the deal he negotiated + hailed as a triumph – despite many, yours truly included, warning it was a dud – *and worse* now using it to further undermine our relationship with some of our closest friends in an increasingly dangerous world https://t.co/tuswxzh8Sn

UKG has no intention of keeping to what it negotiated & signed up to. His speech is a calculated insult, containing much falsehood, culminating in an impossible demand to replace the Protocol with a new UK drafted legal text. This will not end well. https://t.co/Zb8iYxuCW6

In the Q&A session at the end, Frost was asked if the UK had signed the protocol in good faith, to which former cabinet minister David Gauke tweeted:

When @DavidGHFrost is asked if the UK signed the Protocol in good faith, he could not stop himself smirking.

The question that we may soon be asking is, how will the EU respond to the provocation?

We are rapidly becoming a pariah state, as sullen and unpredictable as Putin’s Russia, with simmering resentment at not being given the respect that our history, exaggerated sense of self-worth and inflated ego thinks fit.

As Mr Zuleeg forecast, it will not end well. 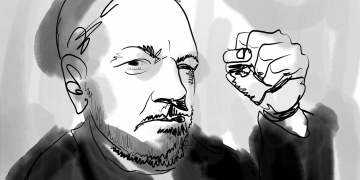 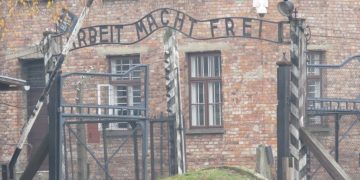 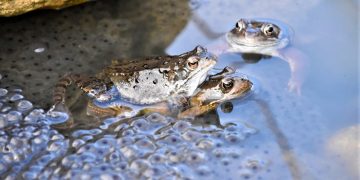 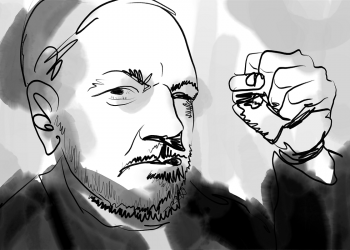