Kerry Pearson writes about The Real Junk Food Project; a Leeds-born business which aims to cut global food wastage and slow down climate change. By salvaging food that is going to waste and catering for weddings, events, schools and restaurants, TRJFP are doing their bit for the environment. Support the business today for £60 per year. 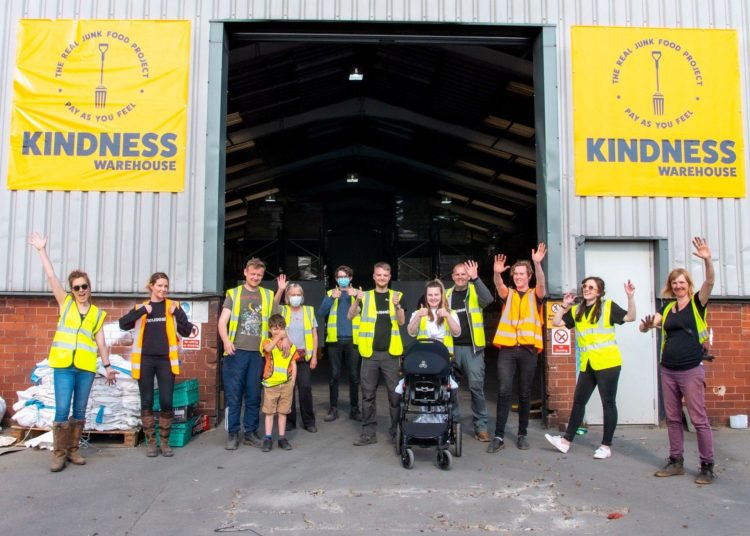 Some of TRJFP team; Adam Smith (founder and CEO), third from left

The right to food is a fundamental human right, to which everyone around the world should have access. This is one of the key beliefs of The Real Junk Food Project (TRJFP), a Leeds-born company, set up by Adam Smith in 2013 with the world’s first ‘pay as you feel’ (PAYF) café. TRJFP uses salvaged food from a variety of markets, which would otherwise have gone to waste. The company has since expanded; there were 120 PAYF cafés across 7 countries at the end of 2016, and they now offer wedding catering, food for schools, and FREEGAN boxes too.

According to the Food and Agriculture Organisation of the United Nations, over 1.3 billion tonnes of food is lost or wasted every year around the world. If just a quarter of the food was saved, it would be enough to feed 870 million hungry people.

To combat such waste, TRJFP teams describe themselves, and act as, food ‘interceptors’, meaning they collect food that would have been wasted from 1,300 suppliers: supermarkets, distribution centres, cafes, farms, food banks and others. Food that is collected is often thrown away because it is past its sell-by date, has suffered accidental damage, has damaged outer packaging, or simply because the shop shelves are ‘full’.

Since TRJFP’s creation in 2013, when it set out on its mission to “feed bellies not bins”, over 7,000 tonnes of food waste have been recovered, the equivalent of 16.6 million meals. More recently, the company moved into an 11,000 square-foot purposely renovated warehouse in pursuit of increasing this figure.

To maintain the momentum and impact of the organisation, TRJFP has recently launched a new membership scheme, ‘Kindness Crowdfunding’, for the price of £60 per year, which will be used to invest in people, infrastructure and the climate.

For a time, Adam worked as a chef in Australia, where he discovered the gross levels of food waste. Struggling to fathom such waste, as well as such high levels of global poverty and hunger, Adam set up TRJFP.

It is important, he tells me, to understand more than just the surface level of food waste. Every day, the world produces food equivalent to 6,000 calories per person, a figure clearly too large to be consumed and understood. So, why is so much food being produced, and why is there such a stigma about expiry dates? TRJFP’s aim is to educate and empower all groups of people about food and eating, and to expose the devastating consequences that food waste has on the environment.

What challenges did The Real Junk Food Project face when setting up?

Adam explained some of the many challenges that he faced setting up TRJFP. First and foremost, people told him he was “crazy”. What was more significant however, was that while Adam never struggled with the idea and concept of the business, it was the personal relationships and intimacy of the work that often threw him.

As a young boy, Adam was in prison, and ten years ago he attempted to take his own life. More recently he was diagnosed with autism and ADHD. Often, saying the “wrong thing” and his inability to be “anything but honest”, has meant that he has had to take a step back from parts of the project.

Nonetheless, Adam’s vision, resilience and hard work have meant that he has created a business that is helping to combat climate change.

By over-producing and over-manufacturing food, societies around the world are having a near-irreversible impact on the environment. Shipping goods in plastic bags, using high amounts of energy to produce food, and keeping livestock that require gallons of water, all contribute to climate change.

Consumers are frequently blamed for producing too much food waste at home. But while everyone has a duty to value food and avoid wastage, it is imperative to think about the bigger picture and realise that even if every citizen did their bit, large corporations still hold responsibility.

Many companies and supermarkets ‘greenwash’, and advertise the fact they have cut down on emissions, that they donate to food banks, or have slashed their plastic use. But, until businesses begin to lose money from food wastage, they will continue to over-produce. What is needed, Adam suggests, is for the government to put pressure on large businesses.

In 2015, Adam set up ‘Fuel for Schools’. TRJFP distributed surplus food to primary schools every week, where children would have the chance to run a market stall selling the food to people who would pay whatever they could or wanted to. In the five years that the campaign ran, 10,000 children were educated and empowered to learn about food waste and how to salvage it. Fuel for Schools ensured that no child went hungry and that thus that their education wasn’t in jeopardy. The Covid-19 pandemic put paid to this campaign as TRJFP lost contact with schools and were unable to run in-person sessions.

TRJFP also caters for private and corporate events including weddings, birthday parties, christenings, conferences, business lunches and festivals. Astonishingly, the company catered for a wedding for 300 people, where all the food used in meals would have gone to waste.

The new membership scheme: what does your £60 go towards?

On Sunday, TRJFP launched its new crowdfunder campaign, where anyone can become a member for £60 a year, joining the #FeedingBelliesNotBins revolution. The membership scheme offers the public a chance to invest into the business and its values, to help them expand, and to purchase infrastructure – electrical vehicles, community farms, and a new warehouse – which will enable their campaigns to continue.

Perhaps most importantly though, the target of £60,000 would enable the company to invest in people: to offer more employment opportunities, purchase aprons and uniforms to give people a sense of purpose, and overall improve morale.

On top of helping the business grow and investing in people, members will receive one complimentary ‘magic’ food box per year, as well as access to volunteering and employment opportunities, and information and ‘early bird’ access to bistro events.

Wasting food is a major contributor to climate change. According to the UN, “one-third of all the food produced in the world ends up as rubbish before it even gets to the table”.

Now one of the UK’s largest environmental organisations, TRJFP is committed to combatting food waste and climate change, to feeding everyone around the world, and to educating people about healthy eating choices.

2020 was an unprecedented year for people all over the world. Nobody has been unaffected by the pandemic. TRJFP has worked tirelessly to ensure people in the UK have had access to healthy, affordable food, as well as preventing wastage. Now, the project is calling for your help to expand the business and continue its invaluable work.