A first-hand report from British Columbia of the first growth tree forest sites at Fairy Creek, Vancouver Island (part one of three). 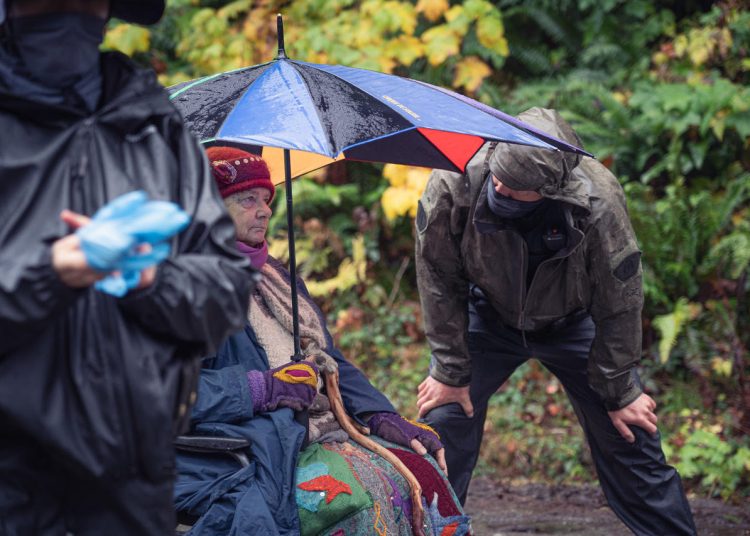 Elder at Fairy Creek, with permission of ©focus.wandering

I wanted to keep writing about Fairy Creek, about the majestic forests of British Columbia, and the ‘forest defenders’ – the increasing numbers of activists trying to save these ancient forests. But it has been hard finding the words to explain what I have felt and witnessed as this story continues to unfold. I was shaken to my soul watching the violence that has ensued over these months. It is what indigenous people here have experienced since we set foot on these lands, and, while we all know that from reading our history, it only really strikes home when you are seeing it happen and dealing with it on the frontlines.

Over the summer, while forest defenders were fighting for the forests, the bodies of indigenous children were discovered in the grounds of schools nearby. Of course, the government rushed in, both federal and provincial, and said how terribly sorry they were. Yet all the while, they continued cutting down the last great ancient forests of BC and Canada. While trees were disappearing, we had the heat dome. While forests were being destroyed, we had entire towns burn down from forest fires. Still the last great forests are being cut down.

At Fairy Creek, I came face to face with the dark side of Canada and indeed humanity. Fairy Creek isn’t just a story about the last intact ecosystem; it is about the sixth species extinction. It’s about how within 150 years we have cut down the most magnificent forests in the world – one of the many self-destructive acts bringing us to within years of our own demise as humans.

My experience is that Canada has a colonial, violent and oppressive system that is very close to being a police state, seemingly run for the benefit of large corporations such as the one at the heart of this dispute – Teal Jones . This part of the story is about years and years of Royal Canadian Mounted Police (RCMP) violence towards minority groups and First Nations. It’s about the threat to freedom of speech, which is vital to preserving democracy. It’s about how politicians and corporations have conspired to put huge profits and their own needs above all else. It’s about how there are some people who are great and some who fail us all.

But then there’s Fairy Creek itself and the people standing up for it: Bill Jones, Rose Henry, Rainbow Eyes – mighty indigenous warriors of peace – the forest defender activists, and the indigenous people holding on still to their old ways of living with the land. There are also small newspaper reporters trudging miles to get the real story out. There are good judges who see how big this moment in history is, and there are lawyers working pro bono because they believe in real justice. So it’s also a story about greatness of spirit – human, and also canine, with my dog Fin, the eco activist sheltie, on his own self-destructive mission to run all cars off the roads for good.

A violent clash with mounted police

Violence towards the forest defenders increased through the summer and peaked as the RCMP, creative in their own violent way, decided to use pepper spray against young, peaceful crusaders who were blocking the road to the trees. And oh, how they sprayed. They tore off the face coverings from peaceful resistors and sprayed directly into their faces. The forest defenders screamed and put their heads down, but RCMP sprayed and sprayed. Watching the horror, I thought Fairy Creek was over that day. I thought the defenders would walk away from the continued violence against their peaceful resistance.

But no! The next day the greatness of the human spirit rose again and returned. And what seemed like a deathblow to the noble attempt to save the ancient forest turned into a triumph, because the violence was enough for national media to pick up the story and Fairy Creek went nationwide and worldwide.

Even then, many reports were biased. There were stories of how an RCMP officer was pushed down – he actually simply lost his footing – and had to be airlifted out. The TV news made sure the injured officer was mentioned but did not offer any explanation as to why peaceful resisters who were brutalised at the time were not airlifted out. Ah, how the truth is always there dancing for anyone who wishes to think and look and for those brave enough to report it (thank you to all the small media).

No forest defenders were ever airlifted out after being knocked out of stand tripods, while half of them were drowning while they were being dug out. That never made the big news, only the one officer who fell down. I do hope with all my heart this officer was not seriously hurt, as much as I hope those forest defenders will not suffer a lifetime of trauma and injury from what they have experienced at the hands of the RCMP. 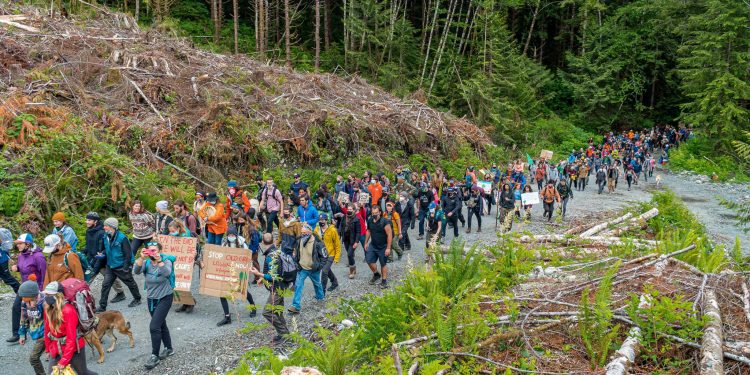 A devastating raid on the forest defenders’ HQ

Over this summer, I tried to not despair as this story unfolded.

I spent some very grim days watching the massive RCMP 4×4 vehicles roll up the logging road to the forest defenders’ main headquarters while it was least defended. The one-year anniversary celebrations were taking place in Victoria and many of the forest defenders had gone to speak there and raise more support for taking action on the dire state of our forests. I left to join them but got news the RCMP were going to raid, so turned around and went to Fairy Creek to do what I could.

There we watched the RCMP machine in action. Huge gas-consuming vehicles rolling in – lots of money there. They told us for safety’s sake we had to be on the opposite side of the road with very little space, while they had the largest area. So, for sure, they were safe, while we took our chairs, stood on the side, and watched as blockaders trickled down from the mountains and as the tow trucks towed cars off. We wrote down the names of the tow trucks and tried to get some tents and possessions back from the Teal Jones trucks that were taking everything to the dump.

Some dispossessed individuals came down. They had no money, no keys (the green RCMP men had taken their keys, their wallets, everything). We gave them money, we gave them rides, we hugged them as they wept. A few times, I was almost knocked down by large trucks skidding around the bend as they tried to terrorise us by swerving towards us.

This was the dark side of Canada – no law enforcement for people protecting the last ancient forest, even though its continued existence is intimately bound up with our own.