Rob Francis describes how an area of North Yorkshire is successfully ‘rewilding’, resulting in a bio-diverse influx of wildlife. 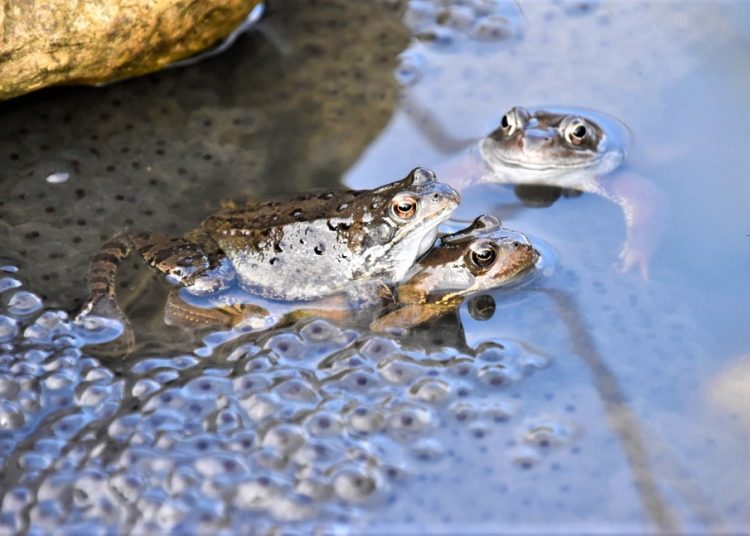 Seven years ago, around 2015, a plan was drawn up to return five acres of North Yorkshire land to nature. Five acres became ten, and, thanks to the cessation of centuries of sheep grazing, the recovery is taking place in earnest. The focus was to let wild creatures have safe places for roosting, abundance for eating, space for learning to fly, hunt, feast and create broods in securer sites – a dramatic alternative to living alongside the valley farmers’ fly-strike-infected, bleeding sheep, rotting their wool and lives away.

It was a bold move perhaps in game bird country, especially given the minimal knowledge of ‘wilding’ processes amongst us all, including participating local and countywide nature conservation organisations. So much learning and making decisions as we went along, we have managed to create habitats that are now home to a remarkable range of wildlife.

First steps in the rewilding process

The focus of early days of the transformation was simply to stop the grazing, except for a few Hebridean sheep, who nibble extensively on low and high levels of vegetation. Their goat-like behaviours meant they browsed well up into the old hawthorn and holly hedges, carrying out useful trimming and saving work on hedge cutbacks by local farmers.

Then, hedges and trees were increased and diversified to create a range of habitats for different bird and insect species. Fences were secured and fields were divided into small areas to ensure more protection for potential young trees and bushes from predicted bark stripping and nibbling by some critters.

In times of 19th century lean food supplies, nettles were invaluable for making vats of soup, but when the focus is on attracting a range of species, diversity of flora is what’s required. Some 12,000 thistles were pulled in one year alone to reduce the endless swathes of them, the goldfinches and greenfinches seeming to prefer the ever-enlarging knapweed areas with their multiple seeds on the land.

There was endless to-and-fro discussion of small and big decisions. Which trees and shrubs to plant? Where? When? What size of whips to plant? Which type of protection guards to use? Where to locate them? Decisions all made on a wing and a prayer due to our lack of experience and expertise or wisdoms.

A main criterion in selecting tree and shrub species was what wildlife they were good for. The alder buckthorn, for example, was a firm favourite of the conservation adviser for its attraction to breeding brimstone butterflies, so 25 alder buckthorn whips were included in the four waves of tree and shrub planting in five years.

Another crucial deciding factor was whether the trees and shrubs had thorns. If so, they were generally eliminated from the planting list, as 95 percent were to be thorn free. Blackthorn, hawthorn and holly were excluded anyway, as they were already present on the ten acres in a range of ages, and tending them caused repeated injuries. So with no sheep grazing, we thought, why have more thorn injuries in aching, tired hands to dampen enthusiasm and increase the effort!

We finally settled on a mix of different UK native trees and different whip sizes, varying from 30-60cms to 120cms. We also included some small trees of around five years old. So 2015 saw the first wave of planting in two copses, now known as Upper and Lower Copse in one of the fields we were to call the Ashfield. Over the course of these six years, the copses have become, as planned and hoped, a glorious feed mix of berries from rowan, white beam, hawthorn trees, field maple and guelder rose. Silver birches, aspen, hazel and oak were subsequently added into this planting mix along with alders in the wet areas. The oaks and silver birches, five years old and eight foot tall at planting –  and so now already proper trees!

The new trees of all sizes needed protection by way of safeguarding their early growth. We bought green mesh tree protection guards with cable ties and stakes from a warehouse off the A1. We were assured that they were good value, suitable for all sizes of trees being planted, and guaranteed to be easy to set up. The reality of this last promise turned out to be a little different. Cable ties 4.5cms or even 10cms long to attach mesh guards to stakes are a nightmare to use in cold, wet weather, and extremely fiddly on the hands. Knocking in tree stakes in cobble-ridden fields was a ‘swearing’ experience, as well as hazardous.

Now that we have this beautiful area of naturally flourishing growth, what started to come to feed and live there?

Nature is remarkably interconnected, and news spread quickly on its incredible social media. In the March in the first year, just four weeks after we created field scrapes and a garden pond, thousands of frogs and hundreds of toads arrived. Our very own ‘Spring Watch’ for three or four weeks, as the pond and scrapes came alive with writhing, partying creatures, who left behind their promising batches of ultra-slippery spawn and a new generation. They now return each year, and it’s a favoured haunt tracked by herons!

Let’s imagine a walk into the copse today. It’s 8.15 on a January morning, 2022, so you catch sight of the barn owl quartering. You count five types of tits – blue, great, marsh, coal and long-tailed – all heading out of night-time roosts in thickening hedges, before the male sparrow hawk turns up around 9 am for its breakfast take-away. Blackbirds wintering here from Scandinavia vye with local blackbirds for the last of the rowanberries, mistle and song thrushes, fieldfares and redwings having cleared the shelves of most of this stock before the festive Christmas season.

Later as sun rises on the copses, the kestrel sitting on the 30-foot silver birch waits to pounce on field vole brunch. The early afternoon arrival of three bullfinches, two male and a female, signal the highlight of all the effort – such colour, such antics to find the softest berry left to eat. Alders bring in flocks of siskins and goldfinches gobbling their way through alder seeds in cones.

Quietly through the night in the hedgerow, the trap camera picks up the voles, wood mice and partying moles scurrying to find their berries, seeds and midnight nibbles. The tawny owl breezes in quietly for a nocturnal catch-up with friends. The song thrush left an early Christmas present by the back door again – an empty snail shell with its single hole knocked through.

It’s an ongoing experiment and the results so far suggest that Nature is coming back and loves it all. Next time, tales of brimstones and deer…