Push is walking from London to the COP26 summit in Glasgow meaning he will have completed over 400 miles and an estimated one million steps. 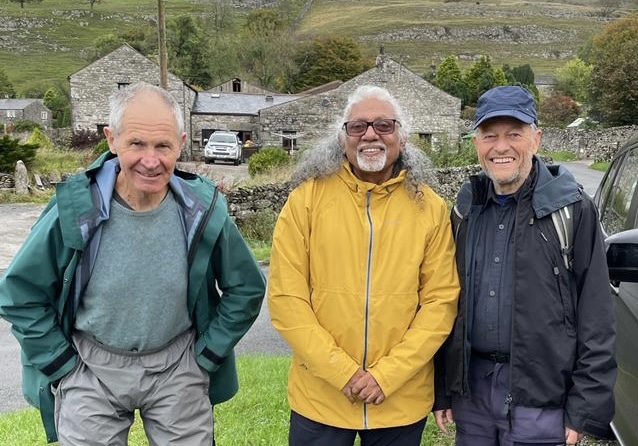 Pushpanath ‘Push’ Krishnamurthy (centre) in Feizor with Paul Kelly (right) and Kevin McSherry (left) before he set off to Glasgow, by Barry White

As thousands of climate campaigners converge on Glasgow to pressure the 125 world leaders to take serious action to avert a world climate crisis, they probably will not notice one of their number who has walked over 400 miles to get his urgent message across. Pushpanath ‘Push’ Krishnamurthy (pictured above), a British citizen, originally from Bangalore, India, is walking from London to the COP26 summit in Glasgow.

His walk for climate justice and fair trade set off from the Mahatma Gandhi statue in Parliament Square, London, on 2 October. “My walks are about inspiring actions for fair play, creating awareness through compelling stories of real life. They are about opportunity and hope”, he told supporters of Action on Climate Emergency Settle and area (ACE), who met him on his arrival in Settle on Tuesday 19 October.

Later that evening Push spoke at a virtual meeting organised by ACE, where he explained his reasons for doing the walk, the impact of climate change on communities around the world and what we can do about it.

In 2011, he repeated this effort in another Walk for Climate Justice in the southern Indian state of Karnataka, to call attention to the plight of small producers such as coffee growers in an era of climate change. He has spent three decades at the leading edge of development work across three continents, with NGOs such as Oxfam and Save the Children.

Push arrives in Glasgow on 3 November when he will have completed over 400 miles and an estimated one million steps.