Hen Harrier Day highlights the lifelessness of our landscape

As concern about the climate emergency and the nature crisis has grown – along with understanding that the UK is one of the world’s most nature-depleted countries – so has understanding of the damage being done by driven grouse shooting. 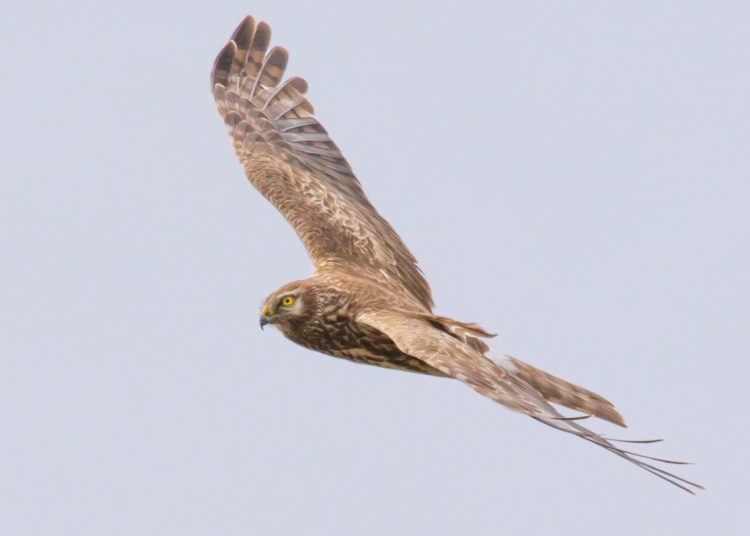 I’ve never been lucky enough to see a hen harrier. The closest I came was on Hen Harrier Day 2017 at the Rainham Marshes in Essex, when a marsh harrier came to patrol the wetlands, where hundreds of fans were listening to Chris Packham, Mark Avery and many other wildlife luminaries.

The bird was, of course, magnificent (and so were the speakers).

But despite the fact that I live in Sheffield and – particularly since lockdown – get out into the Peak District quite often, the largest raptor I’ve seen is a peregrine, which might be a visitor from the city. I haven’t gone looking for our really big visitor – the bearded vulture that has caused such excitement (and worry about its safety) and attracted so many birders.

I tend to be looking for tranquility and solitude on the hills, but what I find all too often is far too much of it. Some avian, mammalian, and even reptilian, company would be most welcome, but what is encountered most often is utter stillness, utter lifelessness. This is a national park, yet it is a barren space of rye grass and heather, cultivated and groomed.

A couple of weeks ago I was on top of Howden Moor, midway between Sheffield and Manchester, and in two hours of walking I didn’t see a soul. But between the rain showers, as I looked out from the heights, I could see the impact of humans: land patterned into monotonous rectangles, lighter green patches of new heather regenerated from deliberate burn-offs. It made me think of Sheffield Green Party member Bob Berzins’ novel Snared, which in fictionalised form paints a vivid picture of what’s happening on these moors.

When I first moved to the UK 20 years ago, I found national parks a puzzle. In Australia they are essentially areas dedicated to wilderness, with very few residents, but here in the UK, they’re hard to distinguish from the rest of the landscape. Given the concentration of history, and the far greater population density, the fact that they’ve got homes and villages in them is not so surprising.

What is surprising is that most wild animals are utterly unwelcome. Here – legally – foxes and crows, weasels and stouts, and even harmless mountain hares are slaughtered to maximise the number of one species: red grouse. This is so that, ideally – from the perspective of those doing the managing – those very same grouse can be slaughtered on the Inglorious Twelfth (of August), when the driven grouse shooting season begins.

Until a few years ago, this was a rural oddity, little remarked outside a small circle. But as concern about the climate emergency and the nature crisis has grown – along with understanding that the UK is one of the world’s most nature-depleted countries – so has understanding of the damage being done by driven grouse shooting. As interest in wildlife has grown, as Britons have increasing travelled the world (to the Polish forests to see the charismatic megafauna surviving there, and further even further afield), we’ve wondered: why can’t we have that kind of wildlife, and the tourism that goes with it, here?

Where are the golden and sea eagles, the pine martens, even the lynx and the bison, that could be attracting wildlife tourism, building knowledge of nature while providing business opportunities and jobs? Where even are the once common and much-loved hedgehogs, now on the edge of extinction?

Of course there are a few outposts around the edges of these islands – the sea eagles on the west coast of Scotland, the storks breeding amidst the rewilding wonder that is Knepp in West Sussex, the beavers in Scotland (at least the ones not being culled). Yet the severe limits on progress became evident last month, with the widely reported death by poisoning of a magnificent young sea eagle. That case reflects what is almost a daily trail of death – of illegal killings – of raptors, faithfully charted by the indefatigable Raptor Persecution UK website.

For raptors – particularly the hen harriers regarded by game keepers as the greatest threat to grouse – the UK is marked by black holes, areas into which many birds are drawn by ideal habitats, but from which they all too often do not emerge. In the case of the increasing numbers of birds with satellite tags, mysteriously the tags suddenly stop transmitting, even though the same types of tags have been known to survive long sea immersion and other difficult conditions.

That’s why I’m participating again this year (thanks Birdgirl for our interesting interview) in Hen Harrier Day 2020, on 8 August. We couldn’t physically get together this year – so no risk of repeating the famous initial event drenching in 2014 – but will not be lacking in fizz or determination. For this is a campaign that’s grown and developed enormously. The understanding that driven grouse shooting is a land use that simply cannot be allowed to continue, as I reflected in the House of Lords last month, has spread and developed.

In Scotland, there is vicarious liability for landowners for crimes committed on their land, and this year the Scottish parliament legislated for a ban on the slaughter of innocent mountain hares (although sadly yet to be in force).

Wildlife champion Chris Packham suggested it would take a decade from 2014 to get this essential ban on driven grouse shooting – to start seeing that land be used for far richer, more biologically and economically rewarding, purposes. As we get set for the big day, it feels like that timetable is on track.