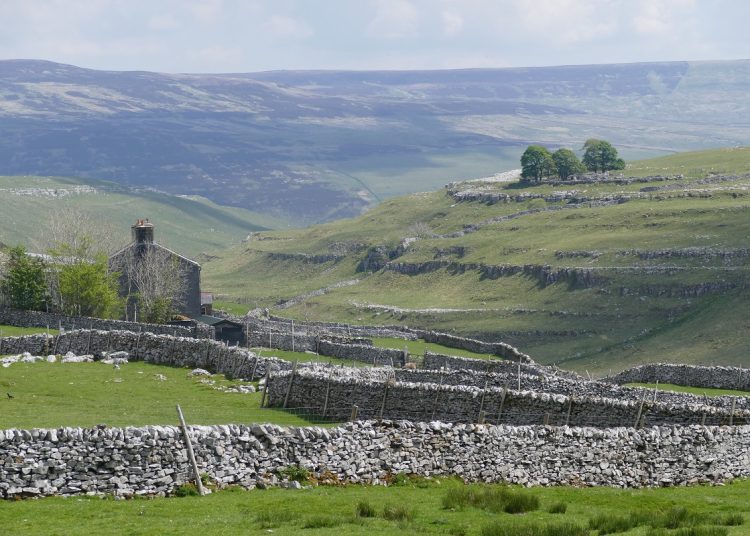 The small number of trees shows that even the high uplands of the Dales was a woodland environment. Much has been nibbled down to the ground by heavy populations of sheep. Photo by Andy Brown

If you look at some of the most beautiful rivers that run down from the Yorkshire Dales, you will find that the water is brown. For a long time I believed this was the natural colour because it reflected the local peat soils. Unfortunately, it is not natural at all. It is the colour that happens when the carbon that has been stored for hundreds of thousands of years in stable peat bogs is exposed to excessive erosion. The soil is washing away into the ocean because there is too little tree cover to hold the soil in place.

The vast majority of the uplands of Yorkshire emerged from the last ice age as a mixture of low scrubby trees that made up a complex temperate rain forest. Those same uplands now provide glorious long-distance views because those trees were removed gradually by thousands of years of human choices in how to manage the land.

The reconstruction of our countryside

In some of the Yorkshire Dales you can still see terraces where local people spent huge amounts of time constructing small areas of flat land that retained moisture and enabled arable crops to be grown to support local villages. Almost none of those terraces now produce cereals and vegetables because they are too cramped for agricultural machines. Like much of the rest of our hills they are covered in grassland that has been nibbled down to the ground by over concentrations of sheep.

Large areas of that grassland are sprayed with a mixture of cow and pig slurry. Not because the fields need the extra fertilizer but because there is nowhere else to dump the consequences of stocking animals in sheds for intensive rearing. Much of the excess nutrients run off into the rivers resulting in long strands of green algae building up in the water.

On the Welsh border, the glorious river Wye has been subjected to much worse damage. A succession of chicken farms, many of them free range, line the banks of the river and the chicken droppings are being washed off the soil in such quantities that fish can’t survive in areas of the river where the algal blooms have sucked the bulk of the oxygen out of the river.

The situation in the British lowlands isn’t much better. Many of our richest areas of agricultural production now consist of huge fields without a single tree or hedgerow where the same crop is planted for a mile. The only way that this can be done without the crop being attacked by insects or fungal spores is to treat the crop with heavy concentrations of pesticides, fungicides and fertilizer. Little is known about the long-term impact of that brew of chemicals on the billions of organisms that live in every spoon of healthy soil.

We need to change how we produce and consume food

Such practices simply aren’t sustainable in the long term. So there is a real need to change the ways we produce and consume food. Unfortunately, those changes are being very badly thought out. Much of the money for agricultural subsidies is being switched from being handed out simply on the basis of how much land is farmed to encouraging farmers to stop farming and restore some of the lost tree cover. Which sounds like it might be of some help until you scratch the surface and discover that farmers are starting to experience long delays in payments coupled with badly thought out subsidy systems that show little realism about their long-term impact.

It is a lot easier to plant trees and to ‘rewild’ an area than it is to remove those trees once they have got established. If the wrong mix of trees is introduced, then the next generation will be stuck with consequences. Taking land out of food production and turning it into a tourist playground of unproductive trees might prove good for nature in the place where the trees grow. It doesn’t prove good for nature in the places where food then has to be grown to feed us.

It is quite possible for the vast majority of our Yorkshire uplands to provide food and provide a rich and diverse landscape that contains significant numbers of trees. A mixed woodland of food trees such as apple, hazel, pear, plum and even walnut grown in places where cattle graze beneath them enables the land to begin to resemble the original scrubby woodland whilst still helping to feed people. What is needed is ideas like this about how to renature the land whilst growing food, not rewilding of land and removing it from production. We need farming but we need it to be sustainable into the long run and to be conducted in ways that foster a diverse variety of wildlife.

Too many of our farmers are currently being subsidised to stop farming and to turn their land over to a supposedly natural wild landscape where large numbers of native trees are being planted very close together. The consequence will be impenetrable woodlands taking over local farmland whilst food is imported from cut down rain forests. It isn’t environmentally sensitive to eat processed palm oil grown on huge tropical monoculture plantations, grain from heavily sprayed Canadian prairies and meat from giant battery farmed sheds where cows are force fed grain and antibiotics without being allowed enough space to turn around.

Yorkshire farming needs supporting to continue in more sensitive ways so that it produces both food and biodiversity. It is important that as much as our food as possible is grown locally and is eaten in line with the seasons instead of arriving via vulnerable just-in-time delivery systems at a supermarket that deludes us into believing the same fruit and vegetables can be eaten at all times of the year without damaging consequences. We need Yorkshire farmers to be supported to provide sustainable food from a sustainable landscape that allows a space for nature.

One of the few really genuine benefits that Brexit could have provided was the opportunity to use public subsidies of agriculture to get genuine public gains instead of paying for land to be used as a commodity that can be consumed without long-term consequences. Instead of using that opportunity wisely, this government is stumbling thoughtlessly into policies that risk destroying much of upland Yorkshire farming without sufficient thought for the future.

It is time for a rapid rethink and for local farmers to be supported to stay in the business of growing food and to be financed to enable their land to provide a rich and healthy environment for much more wildlife.

Brexit isn't working – something we can all agree on