Nigel Farage and his friends believe we should be engaging in another divisive culture war, this time on the future of our planet. 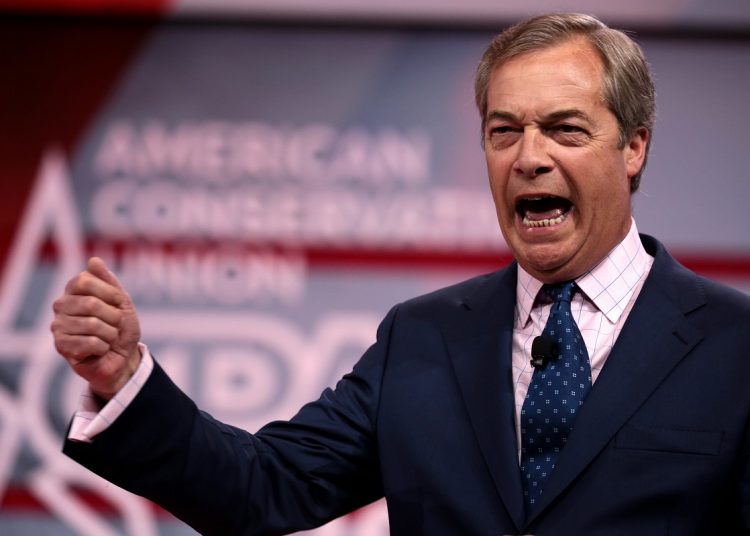 Supposedly campaigning for the man in the street, Nigel Farage is railing against educated metropolitan elites, dismissing the counsel of proven experts, and demanding a referendum in the hope of opposing green targets.

This time Farage and his friends believe we should be engaging in a divisive culture war on the future of our planet. Clearly unhappy to no longer be in the spotlight, he now thinks ‘net zero’ should be the focus of people’s rage, suggesting that ‘net zero is net stupid’.

And in the same way these right-wing campaigners did in 2016, Farage would like to take a genuine grievance, the cost-of-living crisis, and pin the blame on a convenient and plausible, but wholly inaccurate, scapegoat: net zero.

In fact, as with the referendum on leaving the EU, the powerful elite who want to pull our strings have ulterior motives that are all about personal profit and control, and nothing to do with making people’s lives better (or saving the planet).

Why are the exact same people who were stomping around Britain in 2015/16 – with their inaccurate claims about sovereignty, the shape of vegetables, the money that would be apparently saved by leaving the biggest trading bloc on the planet– now all equally distressed by the concept of net zero?

Labour MP, Graham Stringer, who supported Vote Leave, is set to join Farage in his attack on net zero by attending ‘The Vote Power Not Poverty’ rally in Bolton. To give you an insight into his beliefs, in 2017 he said:

“I am skeptical about everything – that is what scientists are. But there has been an enormous amount of shoddy work masquerading as science with regards to climate change.”

The two movements are so intertwined that the previous ‘Leave means Leave’ Twitter account has been renamed Vote Power Not Poverty, creating an immediate following of almost 80,000 people for highly nuanced content, again campaigning for a referendum but this time claiming to be fighting for lower fuel costs.

In reality, fossil fuel remains the most expensive source of energy that exists.

Breaking free of the constraints of the EU

The Paris Agreement, or Paris Climate Accords, was the first ever universal, legally binding global climate change agreement. It was adopted by COP21 in December 2015 and came into force the following year. Every member state of the EU is bound by this agreement alongside almost 190 other signatories. Its principal goal is to achieve a climate-neutral world by 2050.

At the same time the agreement was being negotiated, efforts to prize the UK out of the EU were at a peak. Arron Banks, who according to Isabel Oakeshott was at the time an agent of Russian influence, became the biggest individual donor in British political history. He poured millions of pounds into the Leave campaign as the desperation of an elite few to secure Brexit became increasingly intense.

Bot farms in St Petersburg, and entities such as Cambridge Analytica in the West, targeted online users deemed to be vulnerable to misinformation, playing on fears and prejudices revealed in free online quizzes and other tools to obtain personal information about the user.

Thus, a pincer movement emerged which worked to tip the vote in favour of taking Britain out of the EU. Why would Putin, Donald Trump, and a group of far-right American billionaires give two hoots if a small island off the northern coast of the continent of Europe was in the EU or not? Why do they fund the Tufton Street based organisations that were responsible for so much of the often inaccurate and aggressively anti-EU literature which was so widespread at the time?

For once the interests of certain elements of Russian and American elites coincided. They had a mutual goal of breaking the EU – a high skilled, educated and above all regulated powerhouse. In particular, the EU’s growing green agenda (now enshrined in the Paris Accords) was seen as a threat to the future of fossil fuels, and offered a working alternative to the political and social systems that each supported.

It is worth pointing out the obvious differences between these Vote Leave endorsers. American libertarians dream of a society with minimal state interference, few government controls, and equally few worker’s rights. Compared to the maximum state control in Russia by an authoritarian leader and kleptocrat with a divided West and European governments at its feet with their dependence on cheap Russian gas.

In the middle was the UK with a small group of ideologues who wanted to recreate the American Tea Party Movement on the other side of the Atlantic. Since 2009, Matthew Elliott, founder and CEO of Vote Leave, in the book he co-wrote, ‘The Great European Rip Off’, accuses the EU of “overstepping its authority in setting environmental regulations”.

Around the same time a group of young, radical right conservative MPs, relatively unknown outside of Westminster, formed around the newly formed Free Enterprise Group. Some of them got together and wrote a book which was published in 2012.

Britannia Unchained advocates harsh medicine for British workers which are described as, “among the worst idlers in the world” and proposes Asian-style economic and social models. Those rising stars now inhabit the current government front bench. Dominic Raab, Priti Patel, Liz Truss and Kwasi Kwarteng. The latter’s outage at P&O’s recent sacking of 800 British workers is hard to take too seriously given the future for British workers he envisages as expressed in his book.

With the election of Trump, who is thought to have been a Russian asset since the 1980s, as well as a pliable ally of the American fossil fuel lobby, the US announced its withdrawal from the Paris Accords on June 1 2017, an action since reversed by Joe Biden.

Preparing for the future

Brexit took Britain out of the EU regulatory framework in the same year as Trump was elected.

Since then, the dialogue around carbon emissions and extending the use of fossil fuels has been eased into the public discourse. From embracing the urgent need to slow down climate change, Britain is slowly changing course. The same pockets that funded our departure from the EU are now employing similar tactics to those they used to achieve this aim in relation to net-zero targets and specifically fracking.

The Net Zero Scrutiny Group, which is basically the European Research Group renamed, are lobbying the government to change its stance on fracking, while also dismissing net-zero targets as unethical. Net Zero Watch claim that advocating the green agenda is akin to cancel culture and that governments are burdening households with “hugely expensive climate and energy policies”.

The libertarian right are controlling the dialogue in modern Britain and are advancing their agenda which will dramatically alter the course of an unsuspecting country. Green economics, along with the NHS and employment rights are anathema to their ideology.

We had to leave the EU for their aims to be realised. The same group who secured our departure are now free to put into place a different kind of system. The post war consensus is to be finally abandoned and a harder, dog eat dog environment is on the cards.

A referendum on net zero? Seriously?

Fool us once, shame on them. But fool us twice….