Climate change warnings from the IPCC included low-likelihood, high-impact events that could threaten the homes and lives of millions 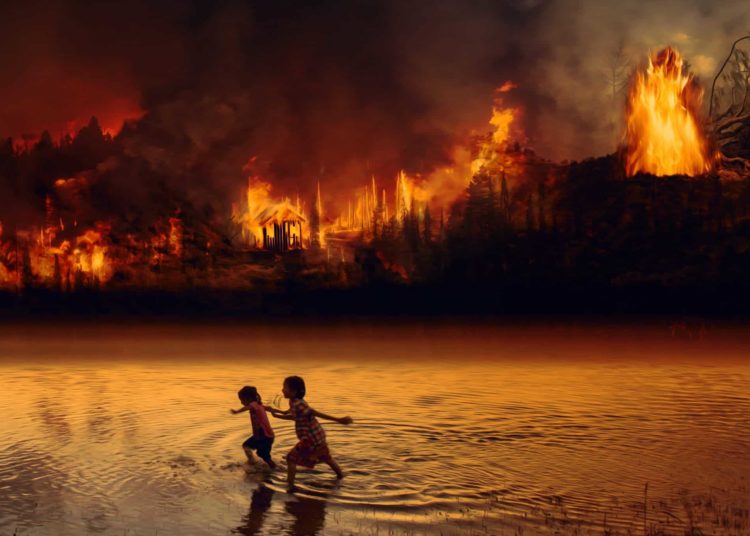 A forest fire burns along a river, image free for commercial use DMCA

It is now a little over two weeks since the top scientists in the world told us that we were on track for a major environmental disaster and needed to act fast on climate change. Already the headlines have moved on and some are treating it as a bit of an irritation while they rubbish environmental campaigners for risking putting up the price of fuel.

Climate change warnings from the IPCC

If that wasn’t scary enough, there’s another aspect to the Intergovernmental Panel on Climate Change (IPCC) report that has been seriously under-examined. That may be because it is worded in very obscure language and says something quite complex. If I quote the original source, you’ll see what I mean:

“Low-likelihood, high-impact outcomes could occur at global and regional scales even for global warming within the very likely range for a given [greenhouse gas] emissions scenario. The probability of low-likelihood, high-impact outcomes increases with higher global warming levels (high confidence). Abrupt responses and tipping points of the climate system, such as strongly increased Antarctic ice sheet melt and forest dieback, cannot be ruled out (high confidence).”

It’s not the most riveting piece of prose I’ve read. Yet it’s a seriously alarming statement. One that comes in the most rigorously tested and challenged scientific report ever written on the subject.

Essentially, what we are being told is that the scientists simply can’t reliably predict whether events with a massive impact will take place suddenly. They don’t think these events are very likely, but they know that their impact would threaten the homes and the lives of billions. Worse still is the fact that if any of these ‘less likely’ events take place, then the impacts are effectively irreversible.

No one knows for sure at what point the releases of frozen methane in Siberia will become significant enough to tip the climate into an extreme warming phase. We do know that currently, there are fires in Siberia that are larger than all the fires in Europe and North America combined. These have almost certainly been triggered by only one degree of warming. And we know that there is a minimum of another one and a half degree of warming to go, and more probably three degrees.

These are not obscure technical concerns. They are events that are capable of challenging the existence of our civilisation.

The impact of climate change on our fragile global economic system

We live in a society where one panic in financial markets caused massive chaos and gave us over ten years of austerity. That crisis landed national governments with huge debts. Then covid came along, and the international health crisis has pushed those debts and tested the security of our economic system to the limit. Imagine what might happen to the fragile economic system that we currently live with if much of the riverfront property in London, New York and Mumbai routinely flooded and became worthless.

Our economic system is guided by the chance decisions of the market. Some quite powerful national organisations like the Bank of England try to exert influence over it, as do some weak and ineffective international ones. Those efforts are simply inadequate to control a major crisis. There isn’t an agreed mechanism for the effective international control of our global economic system.

Inject climate chaos into that system and it will struggle to cope. Everyone acts as if the civilisation that they live within is a permanent construct that will always cope with the changes that are thrown at it and will adapt and change. That isn’t always true. Civilisations fall. Economic and social systems fail. As did the Roman Empire.

The threat to our civilisation from the climate emergency

What the IPCC report is telling us is that serious scientists think that they cannot rule out civilisation-threatening changes taking place as a result of climate change. That is why people like Greta Thunberg are trying so hard to get people to understand that we are facing an emergency. We have lived for over a hundred years by burning up irreplaceable fossils, to drive a civilisation that simply isn’t sustainable in its current form.

When you add up all the energy inputs that go onto a modern farm and then look at the energy output from the food it produces then the equation is usually negative. Transporting and consuming that food increases the imbalance of that equation. The farm and the supermarket may be profitable, the lorry may be the cheapest form of transport and the home may be heated by the cheapest method, but they all depend on the bizarre practice of burning fossilised energy at the expense of the planet.

Such a lifestyle is fragile in the extreme. The best scientists that we have are telling us that we need to act hard and fast if we are going to put it onto a stable basis in a sufficiently short timescale. It is the height of irresponsibility to ignore their mainstream prediction that major action is needed right now if we are going to limit the damage to tolerable levels.

It is even more irresponsible to ignore their warning that there are entirely plausible sequences of events that will cause damage way beyond their mainstream predictions, that no technology is capable of managing, and few civilisations could survive.