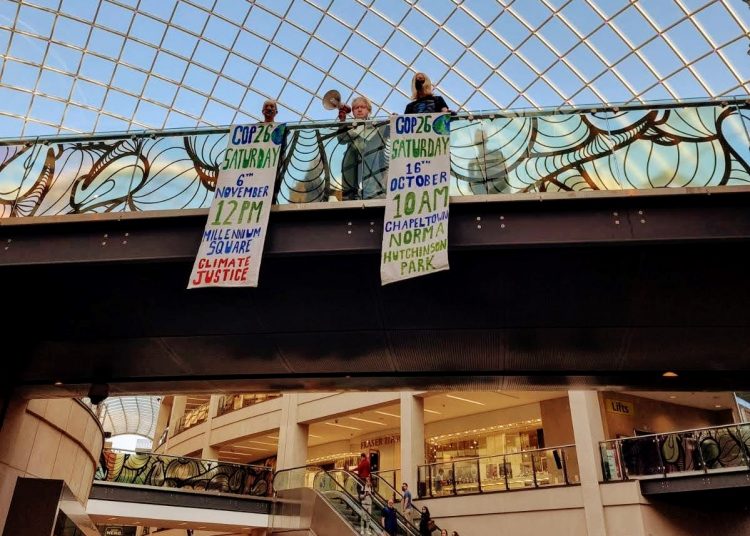 At 5pm on Friday 8 October, ‘Boris Johnson’ visited Leeds to give his speech about the importance of taking immediate and decisive action to mitigate the climate emergency. He was met and questioned by members of the Yorkshire and Humber COP26 coalition, a regional coalition of many environmental and justice organisations who are working together to raise awareness of COP26.

COP is the annual global ‘conference of parties’ where world leaders meet to discuss the climate emergency and action that needs to be taken, and set targets for the following year. This year the event is being held in Glasgow, and has been dubbed the most important event in human history, where the decisions made by our world leaders will have the potential to tackle the problems we face, or hammer the nails into the coffin for all life on earth.

Mass mobilisation has been taking place all over the UK and the world, with up to a million protesters, activists and concerned citizens predicted to descend on Glasgow 1–12 November, to put pressure on world leaders. Regional events will be taking place up and down the country.

Rhetoric vs reality: the government’s approach to the climate emergency

Boris Johnson urged the world to “grow up” and tackle climate change recently, during his annual United Nations address to world leaders. He contradicted the Muppet’s character Kermit the Frog by saying, “It is easy to be green”.

Our COP26 coalition representative pointed out that it is the prime minister who in fact needs to grow up. Johnson needs to stop avoiding all the tough choices, stop choosing greenwashing, and stop failing on every climate and environment policy set so far.

The UK government declared a state of climate emergency in 2019, yet still its actions do not align with this worrying status. The most recent IPCC report (intergovernmental panel on climate change) stated that this was code red for humanity. We are only likely to avert global catastrophe and collapse of civilisation if we divest from fossil fuels immediately.

The government’s own climate change committee (CCC) is an independent, statutory body established under the Climate Change Act 2008. Its purpose is to advise the UK and devolved governments on emissions targets and to report to parliament on progress made in reducing greenhouse gas emissions and preparing for and adapting to the impacts of climate change.

The CCC has advised that there should be a reduction in all polluting industries – including transport and aviation – and no new investment in fossil fuels. Meanwhile, the new ‘jet zero’ aviation policy grants permission for national airport expansion, and a new oil field called ‘Cambo’ is being set up off the coast of Scotland.

What is the COP26 coalition?

The COP26 coalition is a UK-based civil society coalition of groups and individuals mobilising around climate justice during COP26. Coalition members include environment and development NGOs, trade unions, grassroots community campaigns, faith groups, youth groups, migrant and racial justice networks and more. Their aim is to bring together people from all corners of the UK to fight for climate justice and for solutions to the climate emergency that centre and protect those who are most vulnerable to the impacts of climate breakdown.

A group of activists from Spain is walking all the way to Glasgow to draw attention to the COP26 coalition. On Friday 15 October, they will arrive in Leeds. Yorkshire and Humber COP26 coalition is hosting a weekend of celebration to mark their arrival and journey through Yorkshire. Find them on Briggate from 7pm on Friday 15 October with music and entertainment as part of Light Night. On Saturday 16 October, there will be a second event with more music, stalls, and activities for all the family in Chapeltown, starting at 10am outside 189 Chapeltown Road, LS7 3DU.

Saturday 6 November is the COP26 coalition national day of action for climate justice. The event for Leeds is being held in Millennium Square from 12pm where there will be a rally, stalls, speeches and a march around the city.

All are welcome to attend these events. To get in touch, stay up to date or find out how you can get involved further, find them on Facebook or email to be added to the mailing list: yorks-humber-cop26-coalition@outlook.com

Liz Cass is a mother, writer and community organiser in Leeds. A former science teacher, she now works with Energy Heroes, a primary school program that delivers mathematics through the context of climate change. She has been involved in climate activism since early 2019, holding the government accountable and driving the change needed to protect future generations of life on this planet. In December 2020 she published ‘365 Days of Activism’, a guide for anyone to become an active citizen.