The Brilliant Abyss reveals the true scale of our oceans, the astonishing wealth of biological diversity, and the damage of deep-sea mining. 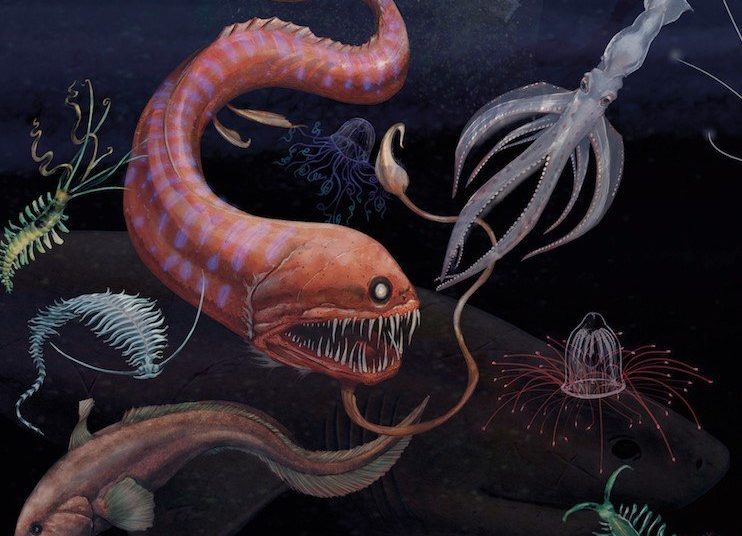 Cover photo of The Brilliant Abyss

That the oceans cover seven tenths of the earth’s surface is a simple fact I must have stated hundreds of times in speeches, usually while referring to how we’re choking them and their creatures with plastics or trashing them with industrial-scale fishing. I’ve also posted scores of tweets over the year sharing reports on the latest amazing scientific discovery from the deep, ranging from the astonishing biology of hagfish (explored in this brilliant Big Biology podcast) to the flower-like beauty of the long-spined sea urchin.

The deep sea: an astonishing environment

But in reading The Brilliant Abyss: True Tales of Exploring the Deep Sea, Discovering Hidden Life and Selling the Seabed by Helen Scales, I realised that I hadn’t truly grasped the overwhelming scale to be found in our oceans and the astonishing wealth of biological diversity, both in systems and methods of life. Nor had I understood the true depth of our ignorance about this world vastly larger and richer than what we see on land.

Scales points out that if you were to drop a marble from a boat above a deep-sea trench, it would  first take about six minutes to fall through the top layer of the ocean, where light penetrates. At around 200 metres, it would then reach the twilight (mesopelagic) zone, through which it would take half an hour to pass. Then it would enter into the proper dark of the bathypelagic, where the water is a steady 4C, before it reached the abyss, at 4,000–6,000 metres. Finally, it would pass through the hadal zone, where, six hours later, 11km down, it would land, and possibly “attract a hungry swarm of pale crustaceans, eager to have a go at eating it”.

The science of the natural world: our evolving understanding

In the House of Lords, I frequently hear fellow members talking about the natural world as though it were a machine, something that we understand all about, as though we had created it ourselves and could read the blueprint. They’re usually the peers who want to promote genetic modification of crops and even animals, who think that we can continue our current industrial forms of agriculture, and who consider the solution to the climate emergency is found in some new, nascent technology.

They’re people who – like myself – first encountered science decades ago. I was taught, as I’m sure they were, science as a series of facts to be understood and manipulated. I remember as an undergraduate a moment of profound disillusionment when I realised the fact we were being taught to regurgitate for the next exam was the exact opposite of the ‘fact’ we had been given to memorise the previous year, but there was no discussion of how this change had occurred. I had to go off separately to study philosophy to learn about the scientific method.

Yet just as I was being taught a set of static facts, at school and university, a whole world of discovery was opening up. Scales reminds me that it was only in 1977, when I was 11 years old, that the first hydrothermal vent was discovered. She reports how, from the submersible Alvin, geologist Jack Cordin said: “Isn’t the deep ocean supposed to be like a desert? Well, there’s all these animals down here.”

The science of hydrothermal vents – where life began

There are now thought to be more than 650 fields of such vents, consisting of dozens or even hundreds of individual ‘chimneys’. Scales explains:

This is now thought to be where life on this planet began. It relies not on the familiar photosynthesis, about which I was taught at school and university, but on chemosynthesis. This is carried out by microbes that convert methane and hydrogen sulphide into energy, using not light but oxygen, which sinks down to them on cold currents of water.

Many larger creatures operate symbiotically, such as the giant tube worm Riftia pachyptila, which led to a huge discovery by Colleen Cavanagh, a first-year Harvard graduate student. She recognised that its trophosome, an organ making up half of its three-metre length and filled with sulphur crystals, could be the home of oxidising bacteria. In fact, there are 100 billion of them in a teaspoon of tissue.

Remarkable discoveries from the deep sea

Scales’ writing isn’t flowery or elaborate. It doesn’t need to be. She very much reminds me of the ‘peasant poet’ John Clare, who wrote, “I found the poems in the fields And only wrote them down”. But Clare was charting an intensely familiar, known world, and what Scales is doing is taking us on a journey with the experts, learning as they do, as over the past four decades, a little about this majority of the planet has come to be understood.

So, in The Brilliant Abyss, Scales tells us about the Xenoturbella:

“In 2015, at the Pescadero Basin vent in the Gulf of California, a mysterious animal was encountered that looks like a purple sock. ‘Think of a sock that you’ve taken off and thrown on the floor’, worm expert Greg Rouse told BBC News. ‘They literally look like that.’ Originally discovered 60 years ago but never seen alive, the animal had baffled experts. Genetic tests suggested it could be a mollusc, but in fact traces of DNA had come from clams these sock animals ate, although how exactly is another unanswered mystery: the purple sock has no gut, no teeth – it’s just a hollow bag. Tests from the 2015 specimens confirmed these animals belong to their own, very early branch of the animal tree of life.”

Destroying what we have barely begun to understand

There are only about 500 deep-sea specialty biologists in the world. That means each is covering – putatively – two million cubic kilometres each, were we to be trying to understand all of it. But – and somehow I’m sure you knew this was coming – humans are preparing to destroy this world that they have barely begun to comprehend. In fact, we’ve already created massive destruction, going back centuries.

Whalers took out massive quantities of energy from the deep ecosystem and smashed nutrient recycling systems. Sperm whales once fertilised enough phytoplankton to remove around 2 million of carbon from the atmosphere every year, equivalent to the annual carbon emissions of the city of Washington DC. Now their numbers – with many other species – are a fraction of what they once were.

The Brilliant Abyss provides a thrilling, detailed description of animal-made ‘forests’ that can cover seamounts and underwater canyons, made by corals, sponges and sea lilies. Because there’s not much in the way of nutrients, these are often slow-growing, long-lived species. Bamboo corals live up to 200 years, individual sea lilies up to 340, hezactinellid sponges 400 years. Gold corals can make a couple of millennia, black corals more than 4,000 years.  Then deepsea trawling began in the late 1970s and early 1980s, particularly for orange roughy – a slow-growing, deep-sea fish that was, in a pattern so often repeated, rapidly fished down to nothing.  As a consequence, and at scale, these millennia-old forests were destroyed. Something that continues – for, as Scales extensively charts, astonishingly small financial returns.

Deep-sea mining: an existential threat to the seabed

And now there’s the threat of deep-sea mining beginning in just two years’ time, which feels like the impetus for this book – and a hugely important reason for it. Scales outlines the legal and political framework in which this threat looms and describes its inevitable massive biodiversity – and very likely climate – impacts. She’s a signatory, with hundreds of other experts, to a call for a pause on such mining.

The scariest sentence in this book is near the end: “There is a tangible sense within the scientific community of the unstoppable momentum of an industry backed by powerful lobbies against which scientists can’t do battle.” But it is clear that they – and we – must. Those hardwired, ‘economy-first’ peers I encounter in debate will airily suggest that whatever damage we do, the world will take it, we’ll find a way to patch things up. But as The Brilliant Abyss demonstrates terribly clearly, that’s extraordinarily, dangerously, far from the truth.

A petition calling for an end to deep-sea mining currently only has 35,000 signatures. Please add yours.