Brian McHugh writes about the devastating impact air pollution has on people's health, with research revealing it can lead to asthma, heart disease and strokes. A greater effort is needed to combat air pollution and climate change, and many students in Yorkshire have already begun campaigning for cleaner air. 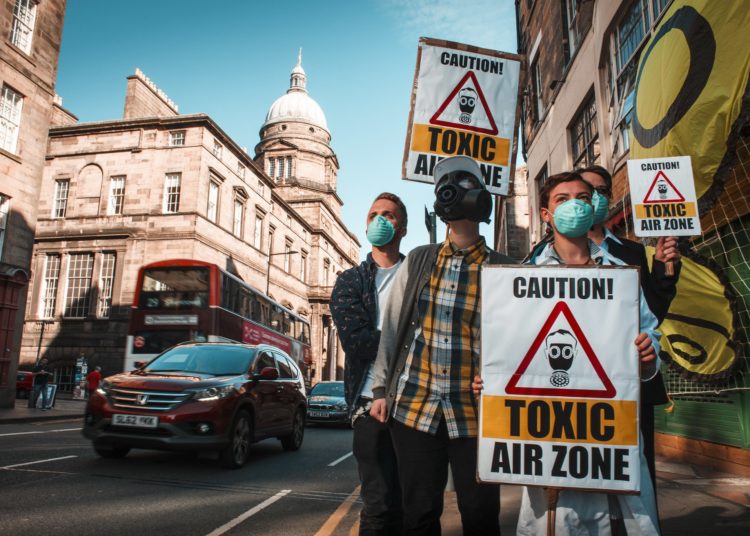 "Activists gather to demand clean air as Edinburgh Air Pollution Zone to be expanded." by Friends of the Earth Scotland is licensed under CC BY 2.0

Air pollution is linked to 40,000 deaths annually in the UK. Why are minimum efforts being made to tackle this crisis?

With rising temperatures globally, owing to climate change, and a 40 percent chance that one year between now and 2025 will be 1.5°C hotter than pre-industrial levels, the increased impact of air pollution on UK deaths is a looming crisis.

As explored in the Science Direct study of 2018 (‘Temperature and air pollution relationship during heatwaves in Birmingham, UK’), when temperatures increase, so do air pollutants.

“This supports studies where the incidence of high levels of pollutants has conclusively been found to be much more prevalent during prolonged heatwaves. When a heatwave is forecast, additional measures to reduce air pollutant concentrations may be appropriate when commencing emergency responses.”

The health impact of air pollution

Through sustained investigations by the Guardian, it has been revealed that air pollution in the UK has been linked to huge rises in child asthma, impairments in cognition, potentially leading to dementia, as well as links to strokes, heart disease and heart attacks.

The coroner in this case, Philip Barlow, has called for the UK to reduce its air pollution limits to match those of the World Health Organization (WHO). At present, the air quality standards regulations 2010 in the UK require that the annual mean concentration of nitrogen dioxide (NO2) must not exceed 40µg/m³ for larger particle pollution, or PM10 (particles up to 10 micrometres in diameter). The limit for smaller particle pollution, or PM2.5 (particles smaller than 2.5 micrometres in diameter), in the UK should not exceed 25µg/m³, while the WHO places their limit at an annual mean of 10µg/m³.

Particle matter (PM) can be found in a variety of places including vehicle emissions, road and tyre wear, and vitally, domestic wood burning. In February of this year, the government released a report, where it found that “Domestic combustion is a major source of PM emissions, accounting for 28 percent and 43 percent of PM10 and PM2.5, respectively”.

The main hope in reducing air pollution is that the government takes the opportunity in the ongoing environment bill to significantly reduce the limits of particulate matter. Although, at present, no specific limit is detailed in the bill, it states: “The Secretary of State must by regulations set a target (‘the PM2.5 air quality target’) in respect of the annual mean level of PM2.5 in ambient air.”

Analysis from the British Lung Foundation suggests that no one in England lives in an area where the annual average of background PM2.5 exceeds the WHO limits. Though it takes pains to point out that there is no safe level of air pollution.

Yet despite the British Lung Foundation’s findings, the following conjecture from Harrogate Borough Council suggests that the WHO limit for PM2.5 of 10 µg/m³ is likely to be breached in Yorkshire:

“Continuous PM2.5 monitoring that has been carried out by City of York Council and Leeds City Council has shown annual averages for 2018 ranging from 10.44 to 11.39 µg/m3 . Given the consistent concentrations across the two districts which Harrogate sits in the middle of, it is not unrealistic to predict that concentrations would be a similar level within the Harrogate district.”

A close examination of monthly data, gathered from air quality reports, gives a stark contrast to annual averages, suggesting that annual limits are not the most helpful measure, especially when the data for some months can also regularly exceed the WHO limit of for PM10 particles of40 µg/m³.

Reducing car use in Chapel Allerton: making small steps to make the difference

In September 2020, Chapel Allerton Primary School started a bold initiative – to reduce as many journeys by car to school as they could. Parents were asked, on days that theydropped off their children by car, to park farther away from the rear of the building, in order to mitigate the air pollution around the school – thus creating an effective voluntary exclusion zone for cars.

Instead of just moving the problem further away, parents and students began tracking travel habits to encourage real conversations about the necessity for road travel and to engage communities in small changes that become habits.

“The change has been transformational. We weren’t asking that much from parents – simply to park a street back, if you actually have to drive. This has increased family time, as families can now talk about their days at a slower pace, enjoying their time together.”

She concluded by saying:

“I can only thank the school and the local community for their support and help, without which, this initiative would not have been possible. The school will also be involved in a significant tree-planting programme, with every student planting a tree to help reduce the impact of pollution.”

With many schools, students and residents around the Yorkshire region campaigning for cleaner air from traffic exhaust fumes, local and county councils are increasingly being asked how they can support these campaigns. Another example from the region is the Harrogate district ‘walk to school day’ on 18 June, led by Zero Carbon Harrogate. Every mile walked or cycled will be counted, with the aim to start conversations about how to build better transport habits.

In recent months, proposals and discussions about the creation of ‘15-minute cities’, with amenities within a 15-minute walk, removing the necessity for car journeys, has begun in earnest. From Paris to London to Oxford, the need to feel connected to local areas is increasing. Perhaps this future implementation of 15-minute cities will return us to the times when employees lived much closer to their employment and ‘commuting’ becomes an obsolete word. The past year of working from home, owing to Covid-19, has taught us that in response to a crisis, adaptability and resilience are key tools in the solution.

A cultural reset is required

With air pollution continuing to be a critical issue in our society, a cultural shift in energy needs, transport and town planning is required – with the government reducing pollution limits to keep us safe.